The policy of “malign neglect”: How the Russian oligarchy sacrifices the health and lives of the people

On May 11, Russian President Vladimir Putin announced that the “period of non-working days,” which was introduced in late March, would be ended “for all sectors of the economy.” Since then, millions of Russian workers have been forced to return to their workplaces, faced with the immediate danger of contracting COVID-19 and dying from it.

Putin announced the end of lockdown measures under conditions of a steep rise in cases to over 10,000 per day, the single fastest rise in all of Europe. Over the past week Russia became the country with the second highest number of cases in the world after the US, with over 290,000 confirmed cases and 2,722 deaths. 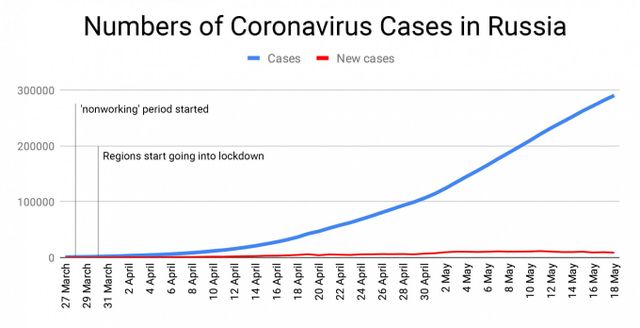 Number of coronavirus cases in Russia

The virus has spread to the highest levels of the state, with several cabinet ministers, including the new prime minister, Mikhail Mishustin, falling ill with COVID-19. The virus has also spread very widely in monasteries and among leaders of the Russian Orthodox Church, which has close ties to the Kremlin and which for weeks defied orders to shut down public gatherings.

Images of exploding ventilators that have killed COVID-19 patients, and doctors falling out of hospital windows have shocked workers around the world.

Under these conditions, the reopening of the economy is a measure that is as criminal as it is desperate. In response to the coronavirus crisis, the Kremlin has no solution to offer that would in any way correspond to the interests of the vast majority of the population.

Even mass media that are loyal to the Kremlin have expressed doubt about the decision. In an editorial from May 13, the Nezavisimaya Gazeta warned cautiously that “weakening the quarantine is filled with new risks,” and that “so far, there is a lack of evidence for any clear positive results from the end of quarantine measures.”

The paltry social measures that Putin announced have an entirely decorative character. They are mostly designed for families with children, 80 percent of which are living in poverty in Russia. However, these measures will do nothing to substantially change the conditions of the majority of the population under conditions of rapid immiseration and a sharp rise in unemployment.

About 25 percent of all workers have lost either their jobs or parts of their income. Under these conditions, according to Svetlana Misikhina from the Moscow Higher School of Economics, the measures by the government will “give citizens only 10 percent of lost income.”

As for support of the economy, in all the measures announced by the government, which amount to about 2.8 percent of gross domestic product (about 3 trillion rubles, or $40 billion), the lion’s share will go to the largest companies, both private and public. This includes the major state-owned oil company Rosneft, whose head, Igor Sechin, has already requested help directly from the president and has received large-scale assistance in the form of reduced oil pumping rates and cheap bank loans.

Meanwhile, the government has demonstratively refused to “break the seal of the money box” of the National Welfare Fund (NWF), which had accumulated more than 12.8 trillion rubles ($165 billion), or 11.3 percent of GDP, as of April 1. The Kremlin oligarchy obviously regards it as its private slush fund, although theoretically anything in the NWF that exceeds 7 percent of GDP is to be spent on social assistance to citizens.

In an interview with the business newspaper Vedomosti from May 5, Finance Minister Anton Siluanov emphasized that all additional government expenses due to the pandemic will be paid for within the framework of existing budgetary resources.

These policies will significantly exacerbate the already staggering levels of social inequality in Russia. Even before the pandemic began, around 20 million people out of a population of 140 million were officially counted as “extremely poor.” Meanwhile, the combined wealth of the 10 richest Russians in 2019 was about $178.5 billion. The country’s top 1 percent controlled more than a third of total wealth.

The policies of the Russian oligarchy completely correspond to the deadly logic of the capitalist ruling classes of the entire world, which put the interests of the super-rich and corporate profits above the right of the working class to live. The World Socialist Web Site has aptly characterized this policy as one of “malign neglect.”

Even when the Russian government introduced the initial quarantine measures, declaring that workers would keep receiving their income, it did not explain how this would be realized. Moreover, the government refused to proclaim a state of emergency, which, by law, would have forced the government to compensate both individuals and institutions for financial losses suffered during the pandemic.

Instead, it introduced the completely new term of “state of heightened readiness.” This legal innovation was pushed through the State Duma (parliament) in three readings in just one day. In practice, this has been a regime of “social distancing,” with people staying at home “voluntarily.” At the same time, the powers of regional authorities and police controls have been significantly expanded and put on a par with those existing under a state of emergency.

None of this was an accidental improvisation. In March, the Kremlin was confronted with what some commentators have called a “perfect storm state of heightened readiness.” In addition to the growing pandemic, there was a massive plunge in world oil prices. Oil exports, along with exports of gas and other raw material resources, account for no less than half of Russian GDP.

Another factor in the sharpening of the crisis was the so called “constitutional reform” that was introduced in mid-January in Putin’s State of the Nation address. The entire cabinet was overhauled to push for an unprecedented strengthening of the powers of the president.

Moreover, the Constitution is being turned into a prop for extreme right-wing conservative-nationalist values, which share much in common with those upheld by the fascist and authoritarian regimes of the 1930s. In a desperate effort to endow the changes with a veil of legitimacy, the Kremlin was preparing to hold a referendum on the changes on April 22. Now, the referendum will likely be held on June 24.

These political considerations no doubt played a part in the push to prematurely end the economic shutdown. In a video conference with regional governors on April 8, Putin said: “We cannot put a hold on the economy. … The conditions must now be created so that companies, organizations and entrepreneurs can return to their usual work schedule.”

As a result, already by April 10 hundreds of factories resumed work in Moscow and other regions, many of which were by no means “essential.” This has been a major contributing factor in the rapid spread of the pandemic in Russia in recent weeks. It was precisely in the period between mid-April and now that the number of confirmed COVID-19 cases grew 10-fold and most of the recorded deaths occurred.

In a particularly stark example of the cynical attitude of government officials toward the lives of the working population, Igor Artamonov, governor of the Lipetsk Region, advised his subordinates in a meeting in April to use chemicals deployed against ticks to disperse people on the streets, in the name of observing “social distancing.”

The complete indifference to the safety and lives of the working population has taken especially sharp forms in the relation to medical workers. The months of April and May have been filled with an unending stream of news about their working conditions: there is a staggering lack of personal protective equipment (PPE), and workers are being massively underpaid. There have also been gross mistakes with efforts to rapidly reorient hospitals toward treating COVID-19 patients, resulting in many cases where infected patients were put together with as yet non-infected patients.

Coming after decades of devastating cuts in health care, this has created conditions where hospitals have become the main sites of infections in the country. On May 13, the minister of health, Mikhail Murashko, declared before the State Duma that there are 400 focal points of the virus in hospitals, leaving patients afraid to come to them. The number of medical workers who have died from COVID-19 in Russia is one of the highest in the world. A memorial page for deceased medical workers lists 222 names as of May 17.

Under these conditions, Putin’s statement in his speech on May 11—“We have chosen the path of saving people’s lives and health, and together we have already achieved a lot, done a lot and overcome a lot”—can be understood only as a deliberate and cynical mockery of the truth.

The policy of malign neglect by the government has provoked an initial upsurge in opposition from the working class. Most significantly, Gazprom workers at the Chayanda oil and gas condensate field in Yakutia, northern Russia, protested their horrifying working conditions amid the spread of the virus in late April. Out of the 10,500 workers on the field, about a third have been infected with the virus. It took the open protests to force management to begin evacuating the field.

The reemergence of the class struggle on an international level and in Russia itself is the first stage in the development of a unified international struggle of the workers of all countries against the profit system. The struggle for the rights, health and life of the working class amidst the pandemic is indissolubly connected to the fight against the capitalist system. However, this struggle raises fundamental questions of political and historical perspective.

The catastrophic social and health impact of the pandemic is a direct result of the restoration of capitalism in the late 1980s and early 1990s. If ventilators explode and hospitals are literally crumbling, it is the result not so much of the virus, but of the dissolution of the USSR by the Stalinist bureaucracy and the decades of austerity that followed under the new oligarchy.

The Russian oligarchy fears nothing more than that the emerging opposition in the Russian and international working class will be imbued with the political programme of socialist internationalism, based on the lessons of the struggle of the Trotskyist movement against Stalinism. It is for this reason that it has initiated a major state campaign to slander Leon Trotsky, the co-leader with Vladimir Lenin of the October Revolution and the main opponent of Stalin, and is cracking down on all efforts to research the crimes of Stalinism. We urge our readers in Russia and the former Soviet Union to contact us to discuss these questions, and purchase and study the book In Defense of Leon Trotsky.

The murderous pseudoscience of “herd immunity”
[16 May 2020]