Despite receiving a credible bomb threat directed against picketing Regina, Saskatchewan oil refinery workers, neither the city’s mayor nor police took steps to notify the workers or Unifor union officials of a potentially imminent lethal attack. The incident occurred at the very height of picket line tensions last February in the bitter lockout at the Federated Cooperatives Limited (FCL) facility, now in its sixth month.

Since being locked out on December 5, 2019, the 750 FCL workers have resisted the imposition of sweeping contract concessions, including the evisceration of work rules, job losses and draconian pension cuts that would cost them up to $20,000 per year. 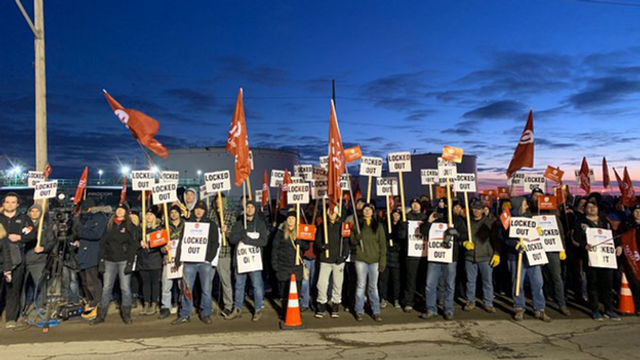 Picket line at FCL's Co-op Refinery Complex, where 750 workers have been locked out since Dec. 5

The existence of the threatening letter was discovered last week as a result of a Freedom of Information request by Unifor Local 594. The undated letter was addressed to the Regina Police Services (RPS) and the Royal Canadian Mounted Police (RCMP). Neither police agency has thus far commented on when they became aware of the threat or why they did not notify the union. What is known is that a copy of the letter was in the possession of Mayor Michael Fougere on February 18. Fougere has said that he immediately forwarded his copy of the letter to the Regina Police Services, but took no further action.

The letter claimed to speak for pro-company “farmers” disgruntled by a blockade of the refinery and its outlying fuel depots established by the locked-out workers. It called on police to dismantle the blockades and adds, “We have already setup some special mixes—and have them set in place at some of these gates, pallets and gates may start flying. Only a cell phone call away from Ignition Time. ..If we see no progress this week—it will be time to act.”

The letter also states that the names and home addresses of union officials are known to its authors, and that it’s “time for action” to get “rid of the Unifor assholes.”

In an official post on Unifor Local 594’s Facebook page, the union stated, “The officials who are charged with the safety of the citizens of Regina chose not to pass along information that people were in danger. They willfully ignored that people could be blown up. They didn’t inform anyone to take extra precautions as they may have had their address disclosed to people who seemed intent on causing harm.”

The union statement, however, does not raise a number of crucial questions. This is because to do so would cut across Unifor’s bankrupt perspective of appealing to Saskatchewan’s right-wing premier, Scott Moe, to intervene and resolve the contract dispute.

There is good reason to believe that the bomb threat letter was dispatched in late January or early February, well before it landed on the mayor’s desk. This would mean the bomb threat was known to police prior to February 18.

The letter calls for the blockade at the refinery to be quickly dismantled by police, and refers to allies amongst “truckers” who are also “reaching their limits.” A look at the timeline of events suggests that the police may well have acted upon the letter—but in favour of those making the bomb threats.

On February 6, 18 days into the blockade, seven owner-operator truckers ran the locked-out workers’ picket line with the connivance of FCL security and took on full loads of fuel. When workers buttressed their blockade with automobiles to keep the truckers confined inside the refinery, police mounted an operation to remove the vehicles. That same morning, unmolested by police, a large convoy of independent truckers paraded through central Regina and around the provincial legislature building for 90 minutes calling on police chief Evan Bray to “pull down the wall.”

Later that night, in actions reminiscent of a police state, Regina police, emboldened by Premier Scott Moe’s vow to “enforce the law,” set up a checkpoint on a public road leading to a key refinery gate. Only fuel truckers on a pre-approved list were allowed to use the road. Locked-out workers were refused entry and prohibited from exercising their constitutional right to picket as the police organized the dismantling of the blockade. Dozens of fuel tanker trucks were then shepherded by police into the refinery and, throughout the following day, removed millions of liters of gasoline and diesel for distribution to dry or nearly dry FCL retail outlets.

Over the course of the ensuing week, four more workers and Unifor’s lead negotiator, Scott Doherty, were arrested on trumped up “mischief” charges. By this point, the police had arrested 19 peaceful pickets, including Unifor President Jerry Dias.

In addition to receiving the full backing of Moe and the police, FCL management has also found close allies in the capitalist courts. Various injunctions have imposed outrageous restrictions on picketing, and resulted in fines against Unifor of $350,000.

The action to break the Regina blockade took place one day after FCL CEO Scott Banda appeared at the blockade of an outlying FCL fuel depot in Carseland, Alberta. Ominously flanked by fascistic leaders of a self-proclaimed “Yellow Vest” movement and members of “United We Roll”—a far-right “independent” (i.e., owner-operator) truckers’ vigilante group that had earlier attempted to break up a worker-blockade at the depot—Banda told a press conference that the issues raised in the lockout were of national political importance. “Blockades as a tactic to get your way—that’s a challenge and a precedent we should all, as business owners and leaders of business, be very, very, concerned about. We owe it to every other business to not allow this illegal activity to set a dangerous precedent...”

The following week, Regina police chief Evan Bray outraged workers across the country when he told reporters that the 18 day blockade of the refinery was “borderline terrorism.” Yet to this day, police have refused to comment on the credible bomb threats against the refinery workers that appear to have been quickly followed by an all-out police attack on worker resistance to FCL’s demands for massive contract concessions.

Workers must demand answers to a series of questions surrounding the bomb threat and the authorities’ failure to take action. When did the RCMP and Regina police receive the letter? What investigative actions, if any, were taken to uncover the authors of the bomb threat? Why did the police and the mayor refrain from alerting the union and FCL workers to the violent threats made against them? What connections are there between the police and FCL, and far-right forces?

These latest developments further underscore that the entire state apparatus is arrayed against the locked-out FCL refinery workers. Yet even as FCL, with the manifest backing of Moe, is using the coronavirus pandemic and the economic collapse it has triggered to demand still greater concessions. Unifor continues to insist that workers focus their energies on appealing to the right-wing Saskatchewan Party government to “intervene” and end the dispute by imposing an earlier concessions contract recommended by a mediator.