Brazil broke another record in COVID-19 fatalities on Tuesday, recording 1,179 deaths over the previous 24 hours. The country has officially confirmed over 290,000 cases and 19,000 deaths, but the government admits it has lost control of the pandemic’s spread. With the second lowest testing rate in the Americas—less than one-twentieth of the tests in the US—it has adopted an effective policy of “herd immunity” with dire consequences for the country’s population.

Imperial College London has estimated that Brazil had over 4.2 million cases last week, with an accelerating rate of 6.5 percent growth every day, putting it on course to be the global pandemic’s epicenter. Twelve Brazilian capitals have over 80 percent occupation of intensive care units, with many dumping bodies in mass graves. In the second wealthiest city in the country, Rio de Janeiro, doctors have already received medical protocols to choose whom to treat, as ICUs are fully occupied.

The government is consciously ignoring the public health catastrophe, fully engaged in a back-to-work campaign, declaring the whole of industry and construction as essential services that should be left out of partial quarantines imposed by local governments. 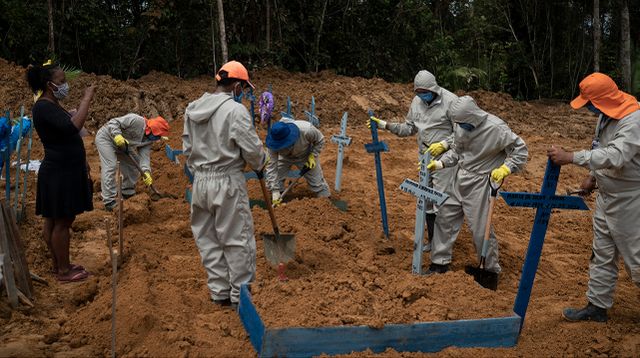 An essential part of this drive has been the definition of hydroxychloroquine as a medicine to be freely used in treating COVID-19 cases, against widespread medical advice that it not only has no proven effectiveness against the disease but could lead to deadly side effects. The government’s promotion of the drug led to the resignation of Health Minister Nelson Teich, who declared he would not “stain his biography” in order to please the government and declare its safety against scientific evidence. Yesterday, the new interim minister, a military general, fulfilled Bolsonaro’s order and issued a new, wider, protocol for its use. For his part, Bolsonaro reacted to the record death toll joking about the freedom of “left-wingers” to take a soda drink instead of hydroxychloroquine, if they so desired.

Even as it closes ranks behind Bolsonaro’s back-to-work campaign, the Brazilian ruling class is conscious that it is bringing Brazil to the brink of a social explosion. The government has constantly cited the 2019 mass demonstrations in Chile as an example of the “social chaos” that will ensue in the case of prolonged quarantines leading to economic downturn. It has ominously warned that it will adopt dictatorial measures in case of social unrest. In the country’s COVID-19 epicenter, São Paulo, the city council has already raised the specter of imminent looting.

Under these conditions, Bolsonaro’s ignorance and criminal indifference to the mounting COVID-19 death toll are seen as a liability and have drawn growing criticism from within the ranks of the ruling elite itself. These sentiments were expressed by the vice president of the largest business lobby in the country, the São Paulo Industry Federation (FIESP), after Teich’s resignation. He said it was necessary to build public confidence for “families to get back to shops and factories,” but that the instability in the Health Ministry generated “uncertainty of what is happening in the country.”

These divisions have fueled daily editorials in the bourgeois press denouncing Bolsonaro, not only for his handling of the COVID-19 crisis, but also for his attempts to mobilize a far-right base against state institutions. The editorialists fear this will contribute to workers’ resistance by exposing the authoritarian drive that must accompany the preparation of the ruling class for inevitable social explosions.

O Estado de S. Paulo, one of Bolsonaro’s harshest media critics, editorialized on May 9 that the armed forces should denounce the “Brown Shirts” being mobilized by Bolsonaro against Congress and the Supreme Court with the stated goal of “Ukrainizing” Brazil, that is, preparing a fascist-led putsch.

On May 14, it opened its editorial pages to an opinion piece by Bolsonaro’s vice president, Gen. Hamilton Mourão, who invoked the “responsibilities” of the press, Congress, the governors and Supreme Court justices to consider their roles in “usurping the role of the Executive” and “hurting Brazil’s image abroad” by criticizing Bolsonaro. He warned once again of a coup, stating that if other powers and political forces did not close ranks behind the government, “this would bring demoralization and reaction and the deterioration of the tolerance and environment of coexistence that should prevail in a democracy.”

Against this backdrop, the bourgeois press and bourgeois political opposition forces are changing the focus of their criticism of the government from its catastrophic mishandling of the COVID-19 crisis to accusations against the president of using his extensive connections with the repressive apparatus to shield himself and his family from investigations of their involvement in criminal schemes. This includes possible ties to the death squad murder of the Rio de Janeiro City Councilor Marielle Franco of the Socialism and Liberty Party (PSOL) in March 2018, through a former parliamentary aide to the president’s son Flávio, Fabrício Queiroz.

Queiroz is under investigation for managing embezzlement schemes in Brazilian local parliaments through which aides funneled part of their salaries back to the office holder. In the case of Flávio’s aides, the police suspect the money was transferred to the Crime Office gang, whose presumptive leader, Adriano da Nóbrega—later murdered by the police—had relatives working under Flávio when he was a Rio state legislator. Rio’s militias are direct successors of the 1964-1985 death squads and are chiefly composed of retired and active duty policemen, controlling essential services as well as drugs and gambling in vast swathes of Rio’s impoverished, working-class northern and western sectors. They were praised by Bolsonaro as vigilantes “fighting crime” during his entire 30-year parliamentary career.

In late April, Bolsonaro’s Justice Minister Sérgio Moro resigned, charging the president with firing the head of the Brazilian Federal Police (PF), Maurício Valeixo, in order to gain access to investigations, including the probe into Flávio’s militia ties and Franco’s murder. This led to the opening of an investigation by the Attorney General’s Office and the demand that the government hand over to the Supreme Court (STF) the tape of a cabinet meeting in which Moro claims Bolsonaro made clear that the replacement of the police chief was motivated by his desire to defend his son against the investigations.

The tape has become an obsession of the press and members of Congress, with its possible disclosure by the STF seen as a “Watergate” moment for Bolsonaro, sealing his downfall.

The gravity of these accusations notwithstanding, they serve a definite political function amid the criminal handling of the COVID-19 pandemic, the murderous back-to-work campaign backed by all representatives of the ruling class and the growing fears of a social explosion fueled by the combined effects of the health and economic crises and popular hostility to the fascist moods being whipped up by the government.

Above all, they are providing a framework for the attempts by the ruling class—including the opposition parties led by the Workers Party (PT) and extending from the far-right theorist Miguel Reale to the pseudo-left PSOL (Socialism and Liberty Party) leader Guilherme Boulos—to find the “least costly” means to remove Bolsonaro.

Reale, the author of the trumped-up impeachment charges against PT President Dilma Rousseff in 2016, declared on March 16 that Bolsonaro should be declared “unfit for office” by a medical board, since impeachment would be “too painful a process.”

Two weeks later, a joint letter by all “progressive” candidates in the 2018 elections, including the Communist Party and PT representatives, as well as Boulos, declared Bolsonaro the “greatest obstacle” to dealing with the coronavirus crisis and called for unity after his resignation, endorsing the coup-monger General Mourão for the presidency.

House Speaker Rodrigo Maia has received 25 impeachment petitions over crimes ranging from an attack against public health by sabotaging state quarantines, to calling for fascist demonstrations against the legislature and judiciary. The leading financial daily Valor has reported that Maia fears an impeachment process would backfire, allowing Bolsonaro to cast himself as a victim, and instead prefers to wait for the STF to rule on Moro’s charges.

The starkest exposure of the crisis of the Brazilian ruling class has been the refusal of the largest and supposedly most vocal opposition party, the PT, to take any action. The PT’s leader, former president Luiz Inácio Lula da Silva, declared as late as April 30 that the party should not present its own impeachment charges in order not to derail the process.

The PT’s faithful “left” appendage, the PSOL, denounced its Morenoite House member Sâmia Bonfim’s presentation of an impeachment charge in late March as interfering in party democracy, i.e., its backdoor negotiations with the right wing on how to proceed as safely as possible.

All of these forces are just as terrified of a social explosion as the government itself. Their aim is to guarantee that if Bolsonaro is actually replaced by Mourão as a more suitable manager of the crisis, it is done in such a way as to channel mass opposition back behind the capitalist state.

Brazilian workers are being driven by the combined crises of the COVID-19 pandemic and the deepening economic depression into growing struggles against not only Bolsonaro’s fascist policies, but the whole of Brazilian capitalism, whose defenders include the PT, the PSOL and their pseudo-left satellites.