Automakers expand US production, even as COVID-19 cases increase

Even as new cases of COVID-19 are discovered on an almost daily basis at US auto plants the reopening of the industry is moving ahead at full speed.

This week more shifts were added by North American automakers as they head toward a full resumption of production in early June. Amidst widespread opposition to the premature return to work that is being implemented, with full support of Democratic and Republican state officials, the United Auto Workers is seeking to defuse workers anger to make sure there is as little disruption to production as possible.

On Wednesday, Ford temporarily halted production at its Chicago Stamping Plant in Chicago Heights, Illinois after a worker tested positive for COVID-19. The company suspended production on one line for cleaning and asked workers who may have been in contract with the sick individual to self quarantine for 14 days. 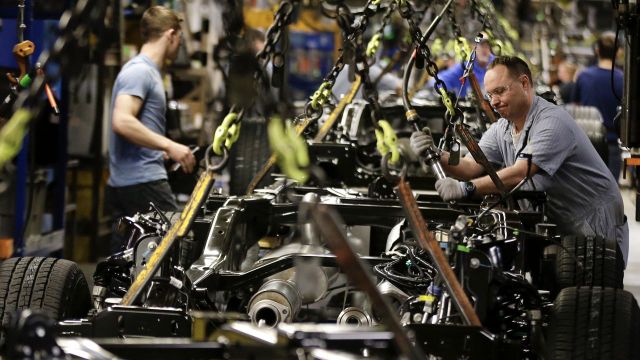 An autoworker prepares a chassis to receive an engine on a new aluminum-alloy body Ford F-150 truck at the company’s Kansas City Assembly Plant in Claycomo, Mo. (AP Photo/Charlie Riedel)

On Wednesday, workers at the Ford Kentucky Truck Plant in Louisville received a notice that a worker had tested positive for COVID-19 on Tuesday. The UAW and Ford agreed that there would be no suspension of production for cleaning since the employee’s last day at work was May 21. The UAW claimed this followed procedures outlined in the company’s return to work “playbook.” On Tuesday, Ford also temporarily halted production on its line making transit vans at the Kansas City assembly plant after a worker tested positive for coronavirus.

Workers posting on social media have reported a number of cases at Fiat Chrysler facilities including Toledo North Assembly and Jefferson North, some reportedly resulting in temporary work stoppages. Both General Motors and Fiat Chrysler confirmed that workers had tested positive for COVID-19 at some of their plants but said there had been no halt to production and did not give specific details. Workers with further information on conditions in the plants are encouraged to contact the Autoworker Newsletter. All requests for anonymity will be honored.

In response to the new reports of COVID-19 cases at its factories Ford issued a letter dated May 28 rescinding earlier guidelines issued in March by Ford and the UAW stipulating a 24-hour closure for cleaning in the event a worker is found to have been infected. The change is justified by a vague and misleading referral to recent studies by the Centers for Disease Control and World Health Organization about the “likelihood a surface is the route of infection of COVID-19.”

In fact, the CDC Interim Guidance for Businesses and Employers Responding to Coronavirus Disease 2019 (COVID-19), updated on May 2020, still recommend that the previous recommendation that employers “close off any areas used for prolonged periods of time by the sick person” and wait “24 hours before cleaning and disinfecting to minimize potential for other employees being exposed to respiratory droplets.” Bowing to the demands of corporate America, it adds, “If waiting 24 hours is not feasible, wait as long as possible.”

As part of the multi-trillion bailout of Wall Street, launched through the bipartisan CARES Act, the Federal Reserve bought the bad corporate debts of large corporations, including Ford’s bonds, which had hit junk status after the pandemic hit in full force in mid-March. Now Ford’s and the government’s debt has to be paid off through pumping profits out of the backs of Ford workers, regardless of the threat to their lives.

“Ford has to earn money to cover its debts, which means it has to have sustainable business,” Forbes wrote in article in April, titled, “How COVID-19 Will Change Finance: Ford, The Fed, And The Bond Market.” The company “has to be profitable, at least over the long term. By owning Ford’s debt, the Fed now owns Ford’s operational and strategic challenges. Will the customers keep buying its trucks? Will a key plant be hit with a labor stoppage? Will the company make a successful transition to manufacturing and selling electric cars? Will Ford survive the shutdown, and the post-COVID restart, and do well enough to meet its obligations to its bondholders?”

The same is largely true for all the automakers. According to a report in Automotive News, Honda, BMW and Mercedes Benz have said they are cancelling their annual summer shutdowns to keep production going and scheduling extra production days in June. A Honda press release said, “all Honda automobile, engine and transmission plants in the U.S. and Canada will run additional scheduled production on June 27 and June 29-30, which had previously been scheduled as downtime.”

Behind the drive to restart production are enormous financial pressures. In an Automotive News podcast Wednesday, Don Walker, CEO of Canadian auto parts maker Magna International, said the auto industry had to keep production going at all hazards despite the spread of COVID-19. “It is absolutely critical we don’t shut down again,” Walker said. Citing cash flow concerns he continued, “We don’t have an option but to keep going.”

General Motors has announced a fast payment program aimed at keeping parts suppliers solvent as they ramp up production. Ford and FCA are looking at similar schemes, which will no doubt lead to gouging suppliers with high interest rates and demands for further price reductions. This will rebound upon auto parts workers who will be hit with wage cuts and job losses as the parts industry goes through a new wave of bankruptcies and consolidation.

In a sign of things to come Japanese automaker Nissan has announced a cost-cutting plan that is aimed at eliminating $2.78 billion in fixed costs. The company will reduce global production capacity from 7.2 million to 5.4 million vehicles. Nissan will close plants in Indonesia and Spain and said it will eliminate the third shift at its plant in Smyrna, Tennessee. Renault, which is part of the Nissan alliance, is announcing plant closures in France and other countries and slashing thousands of jobs after received a bailout from the French government.

US automakers are putting enormous pressure on Mexican officials to reopen auto parts plants that are crucial to US vehicle assembly. Hundreds of auto parts workers in Mexico were infected as the pandemic spread, sparking a wave of strikes at maquiladora sweatshops along the US border that forced the temporary suspension of production. At least 17 workers from a Lear Corporation plant in Ciudad Juárez, across the river from El Paso, Texas, died. In addition, 432 of the 519 people who have officially died the state of Baja California, which includes Tijuana and Mexicali, were maquiladora workers.

A worker at the Fiat Chrysler Sterling Heights Assembly Plant told the Autoworker Newsletter, “It’s a breach of contract. We are entitled to that money? How can you take that money contractually put in place for us to pay off a situation that we didn’t even create? A pandemic where everyone is getting a certain amount of emergency pay is nothing we can control.”

For its part the United Auto Workers has endorsed the return to work and the abandonment of social distancing measures based on the homicidal policy of the ruling class of “herd immunity,” which takes for granted that the vast bulk of the population will contract the deadly virus. This was reflected by the comments of Todd Dunn, president of UAW Local 862 in Louisville, Kentucky who told local media last week that it was only a matter of time before all workers contract COVID-19. “It will happen,” Dunn said after a reported COVID-19 case at Kentucky Truck.

The situation in auto plants remains very tense with workers questioning the “safety” protocols put in place by management with the assistance of the UAW. The SHAP worker spoke to the Autoworker Newsletter about the continuing threat posed by COVID-19 spreading in the plants. “Most people are very aware of it and follow what is going on. They are aware that there is a lot of iffy stuff going on.”

Management and the union had rejected universal testing as “impractical,” even as the UAW’s top officials got tests before returning to their office jobs. There were many things that management had not considered in its COVID-19 protocols, the worker added. Wearing a facemask for 10 hours “is very difficult with all he movement and the heat. It feels like your oxygen is cut off,” he said.

A worker at parts maker Dana Corporation said, “There’s a few bleach wipe containers and many people don’t have masks. They gave us masks from a box. There is no safety enforcement in plants, it’s like a regular day in the plant.”

In an effort to defuse worker anger, which erupted in protests last week at the Ford Dearborn Truck Plant outside of Detroit, a local UAW official has filed a grievance with Ford over safety protocols. This token gesture, meant to preempt any collective effort by workers to protect their safely, has zero chance of success. Despite this, it has been given considerable coverage by the news media.

Workers should not be fooled. The critical issue of worker safety cannot be left in the hands of management and the corrupt UAW, whose former president is due to file a guilty plea for a million-dollar embezzlement scheme, while others took bribes from FCA to sign concessionary agreements.

The World Socialist Web Site and the Autoworker Newsletter advocate the formation of rank-and-file safety committees to ensure that workers are protected from the impact of the pandemic. This includes control over line speeds and other working conditions, personal protective equipment, universal testing and guaranteed health care and adequate income for all workers. These demands, which cut across the mad profit drive of Wall Street, pose the need for workers to adopt an international socialist program aimed at ending the subordination of society to the domination of the big banks and corporations.