On Saturday, May 30, SpaceX corporation successfully launched the Demo-2 mission, which brought NASA astronauts Robert Behnken and Douglas Hurley safely to the International Space Station. They have joined US astronaut Chris Cassidy and Russian cosmonauts Anatoly Ivanishin and Ivan Vagner as members of ISS Expedition 63. 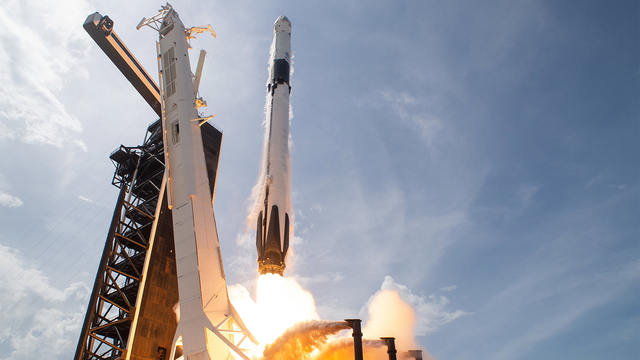 This is the first time that men have been launched into orbit from the United States since the end of the Space Shuttle program in 2011. For the past nine years, the United States has been forced to launch astronauts from the Baikonur Cosmodrome in Kazakhstan aboard Soviet-era Soyuz spacecraft operated by the Russian space agency Roscosmos.

The event was heavily promoted by SpaceX founder and billionaire Elon Musk, the American media and President Donald Trump in a manner that should dispel any excitement that might otherwise accompany another step forward in manned exploration of space. Actually, the launch was not so much a step forward as a retracing of steps that were first taken 60 years ago, in the Mercury, Gemini and Apollo programs.

Without in any way glamorizing the space race of the Kennedy-Johnson years, where the driving force was the Cold War struggle between American imperialism and the Soviet Union, there is something degraded and shabby about prostituting space exploration to the naked commercial interests of a billionaire whose expertise in technology is in the “engineering” of financial services—Musk made his first fortune as a co-founder of the Paypal web site, before going on to ventures like Tesla.

The launch was not primarily about the development of science or technology, but about elevating Musk’s wealth, which according to Forbes stands at $37.2 billion in the wake of the launch, and to promote nationalism and militarism in space, embodied by the #LaunchAmerica hashtag.

Saturday’s launch is being used to validate all aspects of the Crew Dragon spacecraft, above all its ability to safely deliver its crew to space and back to the ground. But this is not fundamentally new technology, despite claims that Musk was the “#1 Innovative Leader” in 2019. The Dragon capsule is essentially a bigger version of the Gemini and Apollo crew compartments developed in the 1960s, albeit with modern touch screen controls and navigation panels, instead of walls covered in buttons and switches.

And while the ability to consistently recover the Falcon 9 boosters and reuse them is an advance, the rockets are still based on the crude process of setting some combination of kerosene, liquid oxygen and liquid hydrogen on fire and using the resulting detonation to lift human beings many thousands of miles above the earth—just as was done in the 1960s. Their safe delivery to orbit and back is due to the collaboration of hundreds of thousands of scientists and engineers in the US and the Soviet Union who worked on this problem in the 1950s and 1960s, and their successors around the world today. Musk’s commercial enterprise is based on appropriating this work to build his private fortune.

In addition, there are still risks with the Dragon capsule itself. The history of private space flight is dotted with casualties caused by companies taking risks that have already been proven very high through the experiences of manned and unmanned space flight for the past 70 years. SpaceX itself has had three major failures involving the loss of a rocket, including one involving an explosion of a Dragon spacecraft after the launch abort system malfunctioned. The company has also had issues with its parachute system, the one that will be used to guide the ship to a soft landing when it returns to Earth.

The relationship of SpaceX and other companies with NASA is such that the agency has very little independent oversight of the technologies being used. Compared to the space program’s height in the 1960s, there is little transparency and a much hollowed-out NASA. The Apollo 1, Challenger and Columbia disasters demonstrate the even the smallest oversights and errors can become catastrophic.

One should also not forget that Musk also runs Tesla, where he ordered 10,000 Tesla workers back into his Fremont, California factory to resume production of his electric car line. In his criminal pursuit of profits, the CEO openly defied public health authorities after the plant had been closed to help prevent the spread of the coronavirus pandemic. While no one has died as a result of the Demo-2 launch, at least so far, the lives and health of thousands of workers have been put in danger by Musk’s reckless and ignorant trampling on science in pursuit of Tesla’s reopening.

“We once again proudly launch American astronauts on American rockets—the best in the world—from right here on American soil,” Trump continued, although it is doubtful that the rocket or the capsule is “American” except in the sense of the corporate ownership: the components emerge from a global labor process involving workers in dozens of countries.

By “prestige,” Trump is referring to American geopolitical dominance in space, which existed in some fashion after the dissolution of the Soviet Union, but which has been shattered in recent years, as NASA launches ceased and the US depended on Russian launches, while China conducted a successful landing on the far side of the Moon, while India carried out the destruction of a satellite in low-Earth orbit, among other space-based activities by other nations.

In Trump’s mind, freeing the United States from its dependence on Russia now enables the US military to more fully flex its newest branch, the Space Force, which was pushed for by his administration and formally created as part of the most recent $738 billion defense budget, with bipartisan support. When it was first announced, the Trump administration made clear that the creation of the Space Force was directly linked to war preparations against China and Russia.

As the Washington Post spelled out, the rockets developed by SpaceX expand the Pentagon’s “launch market.” In other words, new rockets can be transformed into new types of missiles, providing the US military with more options for the mass extermination of whole populations. In contrast, these new ways to get to space are not going to be used for many if any scientific programs, several of which Trump has cut funding for, particularly those that study the effects of climate change on the environment.

The launch was also the culmination of the drive to privatize human spaceflight that was initiated by the Obama administration. Since SpaceX and Boeing were awarded contracts to fly astronauts to the ISS in 2014, both the Obama and Trump administrations have put their weight behind the expansion of commercial space programs at the expense of NASA.

Trump has particularly thrown his support behind SpaceX and Musk, whom he considers a friend, over Boeing’s Starliner as well as Blue Origins, owned by Amazon CEO Jeff Bezos, whom Trump considers a political enemy. Some of the underlying politics of this came to the fore in the days before the launch: NASA’s head of human space exploration, Douglas Loverro, resigned after awarding a large contract to Blue Origins apparently made him an outcast at the White House. Loverro’s sudden departure almost caused the Demo-2 launch to be canceled.

The president has also asserted commercial and property rights in space, particularly for US companies. Trump signed an executive order in April, which declares that “the United States does not view it [space] as a global commons,” and that “[s]uccessful long-term exploration … will require partnership with commercial entities to recover and use resources,” and these will require “the right to commercial recovery.”

Trump is no doubt including Musk in these calculations, especially as the latter has designs about traveling to Mars, with the implication that he could personally own a whole planet.

It should also be noted that this is not the “first time in human history” that astronauts have “entered the @Space_Station from a commercially-made spacecraft,” as proclaimed by NASA. The Space Shuttle, which docked multiple times with the ISS as well as helping assemble it, was built by the United Space Alliance, Thiokol/Alliant Techsystems, Lockheed Martin/Martin Marietta and Boeing/Rockwell. These companies have also played major roles in producing the other rockets NASA has used or still uses to send people and satellites into space.

Whatever the pretensions of Musk or the Trump administration, however, the reality is that traveling to space is a necessarily international endeavor. Even the Crew Dragon launch itself required personnel stationed at various places in the Atlantic Ocean and in Ireland in case the mission had to be aborted after the rockets fired. Once in orbit, a network of satellites and ground stations operated by countries around the world were used to maintain contact with the astronauts in the Crew Dragon as they made their way to a space station built using the combined efforts of space agencies and engineering firms in 16 different countries–the US, Russia, Canada, Japan, Brazil, Belgium, Denmark, France, Germany, Italy, the Netherlands, Norway, Spain, Sweden, Switzerland and the United Kingdom.

During the commentary before last Wednesday’s aborted launch, astronaut Leland Melvin spoke to this side of space travel, in remarks worth quoting at length. “When I first went to space, I thought my primary task of installing the Columbus laboratory would be my ‘aha’ moment, but it was when Peggy Whitson invited us over to the Russian segment to have a meal. She said, ‘You guys bring the rehydrated vegetables, we’ll have the meat.’

“We’re having this meal and it is with an African American, Asian American, French, German, Russian, the first female commander, breaking bread at 17,500 mph, going around the planet every 90 minutes. And when I think about that perspective shift that I got looking out the window, flying over my home town, flying over [French astronaut Léopold Eyharts’] home town in Paris, flying over [cosmonaut Yuri Malenchenko’s] home town in Russia, it brought us all together as a civilization.

“And I think that’s what space flight does for us. The more people that have the opportunity to go to space will feel like it is an international family of people working together for the good of humanity and all humankind.”

Powerful sentiments, but not ones that can be realized in the world of Elon Musk and Donald Trump. Space exploration, as with all aspects of life, must be wrenched from the stranglehold of imperialism and the drive for private profit if the aspirations contained within it are to ever be fully realized.