A report issued Wednesday by the International Council of Nurses (ICN) finds that more than 600 nurses worldwide have died in the coronavirus epidemic, and that an estimated 450,000 health care workers of all kinds have been infected.

The death toll among nurses is more than double the 260 reported on May 6 by the ICN, partly from more countries issuing reports but mainly from the ongoing impact of the pandemic, which has now hit 6.5 million people globally, with more than 380,000 dead. 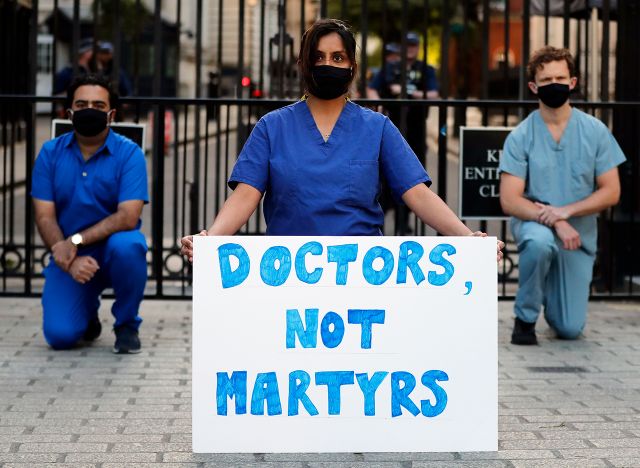 Doctors and nurses kneel in front of Downing Street in London, Thursday, May 28, 2020. (AP Photo/Frank Augstein)

The ICN renewed its appeal for national governments to both keep comprehensive records and step up the provision of Personal Protective Equipment and other measures to protect nurses on the front line of the struggle against the pandemic.

“For weeks now we have been asking for data about infections and deaths among nurses to be collected,” the statement declares. “We need a central database of reliable, standardised, comparable data on all infections, periods of quarantine and deaths that are directly or indirectly related to COVID-19… Without this data we do not know the true cost of COVID-19, and that will make us less able to tackle other pandemics in the future.”

The alarming report from the nurses’ group came as the global total of infections rose by more than 100,000 for the fifth straight day, an unprecedented rise that is concentrated in the Western hemisphere: Brazil, Chile, Peru and Mexico, as well as the United States. World Health Organization Director Tedros Adhanom Ghebreyesus said, “For several weeks, the number of cases reported each day in the Americas has been more than the rest of the world put together.”

He cited in particular Brazil and Peru, while Dr. Mike Ryan, who heads the WHO health emergencies program, expressed concern about a growing outbreak in Haiti, still in its early stages. Mexico reported its highest single-day increase in the number of COVID-19 cases, 3,891. Brazil reported a record 1,262 new deaths caused by the coronavirus, raising its total to 31,199, third-most in the world, with 550,000 confirmed cases, second only to the US.

Other global hotspots include India, which reported 9,614 new cases, bringing the total to well over 200,000.

Meanwhile, the impact of coronavirus in the United States continues on a massive scale, although it goes almost unreported in the national media in the midst of the political upheaval triggered by the police murder of George Floyd in Minneapolis. While daily death tolls have declined in New York, New Jersey and Michigan, the initial epicenters, more than 1,000 people a day are still dying in the United States from COVID-19.

The most rapid growth is in the southern and western states, which carried out the earliest and most broad-based reopening of the economy and ended nearly all lockdowns by mid-May.

According to the latest update from Johns Hopkins University, 20 US states have increasing daily rates of new coronavirus cases, including California, the most populous state, which had 17,000 new cases last week, its highest weekly toll since the pandemic began. Los Angeles County alone accounted for 10,000 cases.