After a Ford Kentucky Truck Plant (KTP) worker in Louisville tested positive for COVID-19, management and the United Auto Workers union withheld the information for six days from other workers at the factory and the nearby Louisville Assembly Plant.

Ford management, with the backing of the UAW, sent workers back into the Louisville plants and others around the country on May 18, claiming new safety protocols would protect workers and their families from the deadly disease. KTP has 8,500 workers that produce some of Ford’s most profitable vehicles, the F-250 through F-550 heavy duty pickup trucks. There are 3,900 hourly workers at the Louisville Assembly Plant (LAP), which produces the Ford Escape.

Just hours before the local media was set to report about the positive case at the plant, UAW Local 862 President Todd Dunn released a statement about the sick worker, contemptuously lecturing workers, “It will happen.” 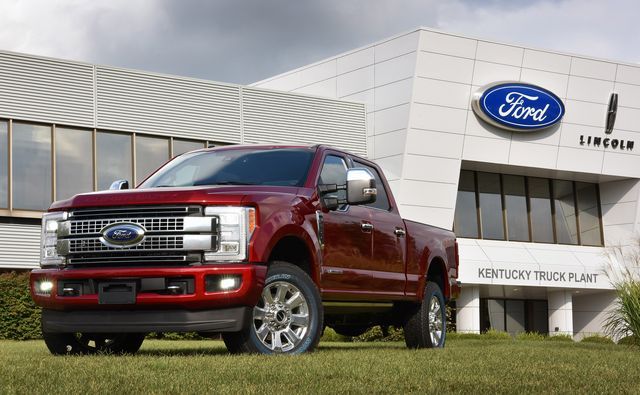 Outraged workers took to social media to denounce management and Todd and other union officials for withholding information for nearly a week so that there would be no disruption to production. In an effort at damage control, company and union officials claimed they did not release the information out of privacy concerns for the ill worker.

One worker declared, “This cannot continue, the hiding of information and such from the members. We have a right to know and we should be informed ASAP.”

Another dismissed the empty comments about staying safe from union officials. “‘Please be safe!’ says the union letting our company force us back to work during a global pandemic, then only telling us SIX DAYS LATER”

Another post, which said, “Shut it back down,” received widespread support.

Ford and the other automakers are determined to run their operations at full tilt no matter what the cost to the lives of workers and their families. Corporate management is relying on the UAW to prevent another series of wildcat strikes over the spread of the pandemic, which forced the shutdown of the North American auto industry in mid-March. Last month, Ford was forced to shut operations in Chicago, Dearborn, Michigan and Kansas City after workers tested positive—and Dearborn workers were on the verge of walking out.

Last month, the New York Times the reopening of the plants would be “critical to the automakers, their dealers and their suppliers, which have lost billions of dollars in sales in recent weeks and have been forced to take on debt to ride out the pandemic.” Ford and other automakers have floated billions in bonds to keep their operations going and have to sweat it out of the backs of the working class to pay their debt.

According Ford’s analysis the automaker had estimated losses of $10 billion due to the pandemic shutdown. Despite this, as of April 24, the company still had $35 billion in cash reserves, due largely to the massive wage and benefit concessions the UAW has granted the automakers over the last decade. Some of the reserves are being used to pay Ford’s parts suppliers in advance to shore up the supply chain to insure their own production.

In comments to the WSWS, Louisville Assembly Plant workers described the conditions in the plant. “People are having panic attacks from wearing the masks and not being able to breathe,” said one worker.

Another commented on the wholly inadequate safety measures taken by Ford and the UAW, saying the “Safety masks that have Ford's logo stamped on them are cheap. They won't let people wear N95 or any other better masks. People are getting headaches and nausea and it's not even hot yet. People in pre-delivery are breathing exhaust fumes, adding to problems.”

On the lack ventilation the worker said, "Ford LAP has bad ventilation which was supposed to have been fixed in 2015 when OSHA was called in. But they're paid off and nothing improved.”

The worker described the incestuous relationship between the UAW and management. “The union and company know about the heat. KTP has a heat stress system called BIGFOOT, installed in 1999 to help with heat stress. But it can't keep up with global warming. Louisville is rated 4th in nation for bad air quality, and coupled with the coronavirus, we're dead ducks.”

“One lady who we work with is on quarantine but how is she the only one when we all have been near her? People are getting quarantined and the company isn't notifying everyone that comes in contact with them.”

The worker also dismissed claims by Ford and UAW that workstations are being deep cleaned. “Since we've been back, I have not seen one cleaning person anywhere. They're paying some contract workers extra hours to come in early and clean work areas, but these people are not qualified to sanitize. They claim they are cleaning between shifts, but how? Do the math: Two 10.7-hour shifts add up to 21.4 hours. That only leaves 2.6 hours in a day to clean these big facilities,” she said, referring to the two plants that spread over 9 million square feet.

Referring to the UAW, the worker said, “Todd Dunn never enforces safety protocols, which is why there are so many injuries and deaths like that of Ivan Bridgewater [in 2018]. No union officials have been seen since we’ve been back to work.”

Workers at Fiat Chrysler’s Jefferson North plant in Detroit are also outraged over hot and unsafe conditions in the plant with many taking sick, personal days or Family Medical Leave Act (FMLA) days when temperatures outside reached 90 degrees. Earlier this week, one worker reported, there were 410 workers who did not show up to work, out of a shift of 1,700 workers. The company is forcing temporary part-time employees (TPTs) work 60 hours a week to make up for absent workers.

“They were only able to run 6.5 hours and 200 Jeeps, instead of the normal 600 vehicles. It’s hot, especially with the masks on, so you drink a lot of water. But then you can’t get relieved to go to the bathroom. They are rotating TPTs throughout the plant, from the engine line to the trim line and others. That makes it even more dangerous because they are not cleaning each station they go to, it’s not safe.”

There is growing anger throughout Louisville over the criminal disregard for workers’ health. A UPS worker has already died at the package delivery company’s giant World Port facility and workers threatened to strike to demand better protections at the GE Appliance Park. The protection of workers cannot be left in the hands of the unions and OSHA—which are beholden to corporate interests. That is why rank-and-file safety committees must be elected in every factory and workplace to oversee health and safety, demand universal testing, immediate high quality and free medical treatment for sick workers and full pay for all workers that are forced to miss work.

The fight to protect workers’ lives against Trump’s homicidal back-to-work policy is increasing merging with the fight against police violence and Trump’s unconstitutional efforts to deploy the US military to crush protests and illegalize dissent. These same measures will be used against workers in the factories who refuse to sacrifice their lives for corporate profit.

A Louisville worker spoke out against the murder of David McAtee, a restaurant owner who was shot and killed by police and National Guard troops opened fire and protesters last Monday. "I think it's horrible what happened. I'm wondering why police would shoot into a crowd of people. They said none of the officers were wearing their body cameras. That just tells us they had ill intentions.”

President Trump, he said, “has divided this country” and “really thinks he's a dictator."