Anger among autoworkers over unsafe working conditions amid the coronavirus pandemic is increasingly merging with outrage over police violence and profound discontent over skyrocketing social inequality.

In the past week, US President Donald Trump has threatened to invoke the Insurrection Act and illegally deploy the military against mostly young, working class protesters who are demonstrating in hundreds of cities across the US against the police killing of George Floyd over Memorial Day weekend. 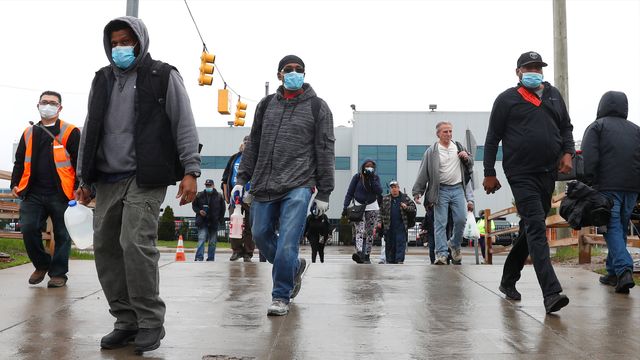 The conspiracy by Trump and his fascistic advisors to carry out a coup d’état and establish a military dictatorship has been met with virtual silence and no serious opposition by the Democratic Party, which has attempted to promote complacency and downplay the dangers facing the working class.

The fight against police violence and racism must be fused with the struggle for safe working conditions and all the democratic and social rights of the working class. We urge autoworkers to attend our online forum this Sunday, June 7 at 3 p.m. Eastern Daylight Time, Revolution and Counter-Revolution in America, which will present a Marxist analysis of the historic events of the past week and outline the way forward for the working class.

The multi-ethnic, multi-racial protests against the police murder of George Floyd in Minneapolis have evoked widespread sympathy among workers. Autoworkers spoke to the World Socialist Web Site in recent days in support of the mass demonstrations and against the Trump administration’s threats of a military coup.

A worker at Fiat Chrysler’s Belvidere Assembly Plant in northern Illinois said there was pervasive discontent among workers over police violence and social inequality. “Everyone’s angry at the police. And at all these corporations who rob the people every day, either by taking away pensions, or their wages, or some other way.”

Responding to Trump’s moves to deploy the military to crush the protests, he continued, “He’s definitely setting up the conditions for something really bad to happen. It’s all going to come to a head.”

He said there was broad sentiment at Belvidere Assembly, which restarted production this week, that it had not been safe to return to work. “No one wanted to be there. Everyone said we shouldn’t have been back yet.

“It’s really crazy, the first two weeks we’re back, they’re rotating shifts every two weeks. But they have about 300 people who are lower seniority working first shift the first two weeks and then second shift the next two. They’re basically being punished. They’ll be coming into contact with more people, and be getting less sleep switching shifts, and have less ability to fight off the virus.

“With everything being shut down, you realize how important the daily worker really is. That’s honestly why they need us back to work, they’re not making money. We’re a lot more important than the CEO.

“They always say they can’t tell us who’s infected because of HIPAA and privacy laws, but I think we should have that information. I think they’re worried that the older, more experienced workers will plan a wildcat.”

A veteran worker from the Ford Kansas City Assembly Plant in Missouri spoke in support of the Socialist Equality Party statement, “A call to the working class! Stop Trump’s coup d’état!”

He said, “President Trump sending troops against citizens of his own country is against the law and he needs to be stopped.

“Truth be told, none of the Democrats or Republicans care if the workers have food to eat, health care, or education. All politicians have the best health care and pensions, fully funded with tax money, but these are the same people that tell workers they must live off of $8 per hour and afford food and childcare with that. Then you have these billionaires like CEO of Amazon Jeff Bezos who has more than five houses but people who work for him are homeless and he won’t even give them enough to eat.

“I think it’s going to take the younger generation to lead the fight against the ruling class. A lot of the demonstrators are young and intelligent, but they need organization. I talk to a lot of the younger temporary part-time workers in the plant, and they work very hard for no pay, and they say, ‘we deserve better than this.’

“In the plant where we’re working while the coronavirus spreads, there is no way you can do your job with social distancing. We can’t breathe in the masks. Last weekend it was almost 100 degrees with the humidity. I also heard that management is not telling us about known cases of workers with coronavirus infections who have been in the plant.

“The working class has always been the backbone of the country. The workers need to realize that Trump wants a dictatorship, and that he is trying to divide them, and they need to reject that and come together as one. Workers need to organize. I advocate being heard, all of us saying, ‘We’re tired of this—no more, enough is enough.’

“Look at history—look at the last Czar of Russia, Nicholas, who was starving the people. The people of Russia, the Bolsheviks, had a revolution. They had had enough.”

A worker at Fiat Chrysler’s Kokomo Transmission Plant in Indiana spoke out against the police brutality and military violence unleashed against protesters by Democratic and Republican governments across the country and rising social inequality.

“Protesting does not call for the military to be deployed. [President Trump] is not following the Constitution. He is trying to be a dictator and he can’t be allowed to be one.

“Police brutality is a problem that has been ongoing for years. It’s wrong that police have been getting away with brutality and killing people of every race. I saw a video in the news of a police officer breaking store windows with a hammer during the protests,” she said, countering the media narrative that the protests had emboldened “looters.”

“The rich and the politicians don’t listen to the voices of the people; they’re a different class. All we do is make them richer while we work for chump change. Some people who lost their jobs during the pandemic now need to work two or three jobs just to make ends meet. It’s been very humbling for a lot of workers.

“I don’t see the unions working for us, either, because they’re for management. Their idea is that company management can do whatever it needs to do to manage their business. The union did not define to us what we needed to do for unemployment benefits. They gave us incorrect information on what we needed to do to apply for supplementary unemployment benefits and they do not stand up for us. I can’t believe we pay them dues for this!”

Commenting that the real looting has been carried out by the capitalist class through the CARES Act bailouts, she continued, “The state budgets did not get enough of the money in the appropriations and they needed it. Now they have no money for teachers, public workers, they could rescind social security and we could have nothing for retirement.

“I believe in protesting and people standing up for something they believe in. If you have a big class of people in unity and solidarity with each other, it will be hard to break that bond. You need to get the word out that we need to get organized with a clearly defined goal. I think the protesters need to raise demands, or they’ll be swept under the rug. They need to rise now and get every issue involved while everyone’s in an uproar. I think we can have the power because we’re actually working [in the plants], we know the ins and outs of it; the rich people and the politicians have never worked a day in their lives.”