“I didn’t receive one warning”

Protester explains how he was brutally assaulted by Secret Service officials in Washington, D.C.

A protester who had attended demonstrations outside the White House in Washington, D.C. last weekend spoke to the World Socialist Web Site about a vicious assault that occurred when he was attacked by a club-wielding federal police official.

On Saturday, May 30, several hundred protesters gathered outside the White House for the second day of protest against the police killing of George Floyd in Minneapolis five days earlier. Tweeting from the White House the night before, President Donald Trump had stated infamously that “when the looting starts, the shooting starts,” recalling the words used by the racist police chief of Miami, Florida against protesters in the 1960s. The same day, he directly threatened the lives of protesters in the capital, declaring that trespassers would be met by “vicious dogs” if they sought to go onto the grounds of the White House. 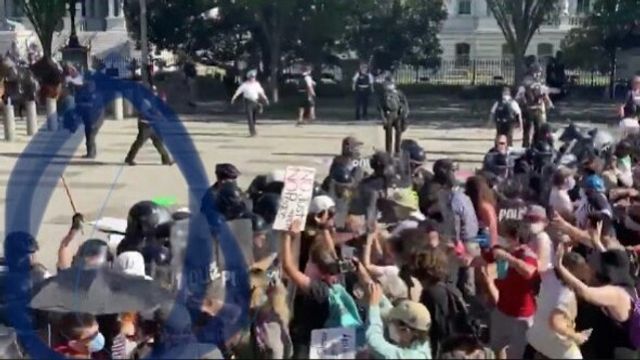 “They were brutalizing people,” said the individual, who will be given the pseudonym George for the sake of anonymity. He stated he had been part of a large group of marching protesters who the federal Secret Service officials were seeking to push away from the White House perimeter Saturday at around 5 p.m.

According to George, there were no warnings. “I was up front, face to face with this guy in riot gear. They were pushing people back who were locked in a human chain. I’m a pretty big guy so while everyone else was getting moved back, I was standing my ground,” he said. “I was hit by an overhead police baton strike.”

Police training manuals refer to the police baton as an “impact weapon” carried for defensive purposes. According to a Wikipedia entry, the weapon is used “defensively to block, offensively to strike, jab, or bludgeon.”

George shared several images of his beating with the World Socialist Web Site, which had been caught on film by local WTOP television reporter Alejandro Alvarez and tweeted on social media. Alvarez’s tweet was captioned “Insanity outside the White House. Three warnings of an unlawful assembly from the Secret Service before storming into the crowd. A lot of people have been hit with paper [sic] spray. In all the chaos, at least one person was tossed to the ground and presumably arrested.” 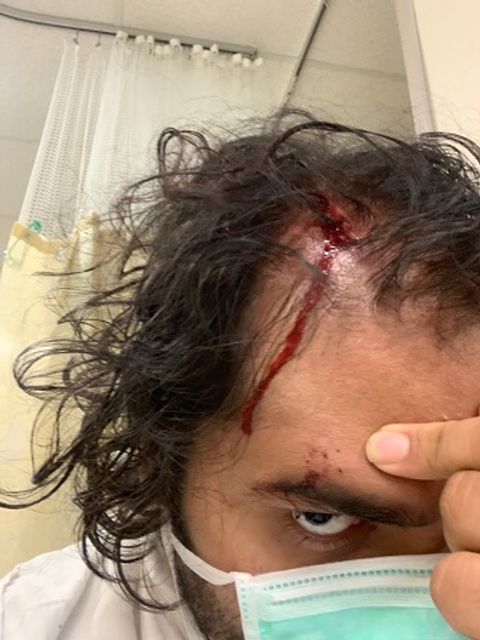 Photo of George’s injury taken at the hospital

George was not critically injured by the encounter. However, he said that he had friends who were not so lucky. “The brutality is really tragic,” he said. “I have friends who were hit by rubber bullets. One guy was beaten and got brain damage.”

The media has sought to present the incident as though the protesters were “clashing” with the police. “I didn’t receive one warning” before getting clubbed over the head by a police baton, George said. Even the local press has noted that chants of “No justice, no peace” and “Hands up, don’t shoot!” could be heard coming from the crowd as they proceeded to the White House.

According to statements from the office of Democratic D.C. Mayor Muriel Bowser, officers from the Metro Police Department reported no serious incidents between themselves and the protesters previously throughout the day. MPD chief Peter Newsham told WTOP his forces “did not make any arrests, we did not have any reported uses of force, and we did not have any injuries reported.”

The US capital has been the scene of some of the most harrowing assaults on democratic rights in the past week, including the deployment of active military forces. On Monday, President Trump had federal agents assault and forcefully remove protesters from Lafayette Square so that he could walk across the street to the nearby St. John’s Episcopal Church for a photo-op. The church had suffered minor vandalism the night earlier.

The use of military force on peaceful protests recalls the darkest periods in modern history and is part of a generalized drive by Trump and his supporters to establish a presidential dictatorship in the US on the basis of the military, police and paramilitary forces, while outlawing all forms of political opposition.

“There are mutual friends I have who’ve supported Donald Trump for years who, after last weekend, are starting to question it,” George explained. “They are making our case for us,” he continued.

George, who is a sympathizer with the International Youth and Students for Social Equality, spoke of the political lessons he has been drawing from the experience. “I used to be put off by how you guys criticized [former Democratic Presidential candidate and Vermont Senator] Bernie Sanders, but you’re right about how he’s trying to cover up for the capitalist state.”

On Tuesday, Senator Sanders published an open letter to Senate Democratic Minority Leader Charles Schumer requesting that a series of demands be included in any federal police reform bill. Among the standard requests for civilian oversight boards, which many large cities already have, as well as utopian demands that stand no chance of being included in a final bill, Sanders called for “ensuring that the resources are available to pay wages that will attract the top tier of officers” in an effort to “modernize and humanize police departments.”

“He’s saying we should give them a raise,” said George incredulously. “I’m sorry, but you can’t ‘free market’ your way out of police brutality.”