On Saturday, in the midst of massive nationwide protests over the police murder of George Floyd, President Donald Trump made clear that he has not abandoned his support for the mobilization of the military to suppress the demonstrations. He was backed Sunday by his attorney general William Barr, who defended Trump’s moves last Monday to crush the protests in Washington, D.C. as part of preparations to establish a presidential dictatorship based on the military and the police.

At 6:45 p.m. on Saturday, while tens of thousands of protesters were marching peacefully through the capital and hundreds of thousands more were demonstrating in cities and towns across the country, Trump tweeted, “LAW & ORDER!” This was an allusion to his fascistic Rose Garden declaration last Monday that he was the “president of law and order.”

Later in the evening he added another tweet: “Much smaller crowd in DC than anticipated. National Guard, Secret Service and DC Police have been doing a fantastic job. Thank you!” 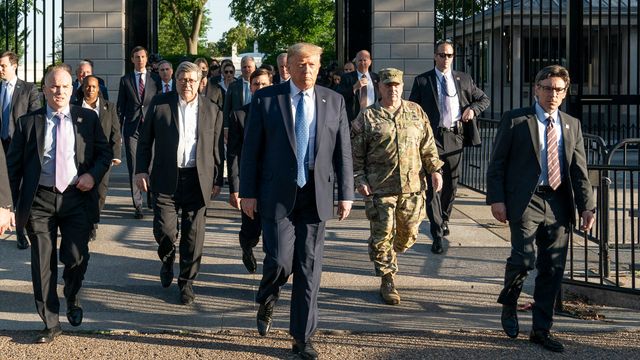 On Sunday, Barr was interviewed on CBS’s “Face the Nation” program. He ignored denunciations by top retired military officers, including former Trump administration officials, of Trump’s threats to overthrow the Constitution, invoke the 1807 Insurrection Act and impose martial law.

Barr categorically supported the right of the President to unilaterally deploy active duty troops to states over the objections of state governors. He also falsely branded as violent the peaceful protest at Lafayette Park that was broken up last Monday on Trump’s orders, and absurdly claimed there was no connection between the violent dispersal of the protesters and Trump’s photo-op holding up a Bible in front of St. John’s Episcopal Church, which took place only minutes after National Guard troops and federal forces had cleared demonstrators from the location.

The interview began with the anchor, Margaret Brennan, citing a “senior administration official” who told CBS News that Trump, at a White House meeting early last Monday, had demanded the ordering of 10,000 active duty troops onto the streets of the country. According to press reports, Defense Secretary Mark Esper and Gen. Mark Milley, the chairman of the Joint Chiefs of Staff, had opposed the demand, resulting in a shouting match between Trump and Milley.

Barr called the report “completely false.” After the interview, Brennan stated that CBS News stood by its reporting on the incident.

Barr implied that such a military mobilization had been discussed and acknowledged that elements of the 82nd Airborne Division had been deployed to bases outside the capital. But he said he and Esper agreed that those military police units should be kept on standby but not deployed onto the streets at that time. These troops, as well as troops from the Mountain Division, have since been removed from the D.C. area and returned to their home bases.

Next came the following exchange:

Brennan: Do you think that the president has the authority to unilaterally send in active duty troops if the governors oppose it?

Barr: Oh, absolutely. The—under the anti-Insurrection Act, the President can use regular troops to suppress rioting. The Confederacy in our country opposed the use of federal troops to restore order and suppress an insurrection. So the federal government sometimes doesn’t listen to governors in certain circumstances…”

It is highly significant that the precedent Barr cited to justify such an action was the Civil War, in which some 600,000 Americans were killed. Trump has given campaign speeches in which he said any effort to remove him from office would result in a “civil war.”

Then came the following exchange on the violent dispersal of peaceful protesters in Lafayette Park across from the White House:

Brennan: Did you think it was appropriate for them to use smoke bombs, tear gas, pepper balls, projectiles at what appeared to be peaceful protesters?

Barr: They were not peaceful protesters. And that’s one of the big lies that the media seems to be perpetuating at this point.

Brennan: Three of my CBS colleagues were there. We talked to them. … They did not see protesters throwing anything. … And the methods they used you think were appropriate, is that what you’re saying?

Barr: When they met resistance, yes.

Brennan then recounted the scene last Monday in which Trump was asserting dictatorial powers and announcing plans to prosecute left-wing “outside agitators” as terrorists at the same time troops were moving against the Lafayette Park protesters to clear the way for Trump’s photo-op:

Brennan: Right around the same time the area is being cleared of what appear to be peaceful protesters, using some force. And after the speech is finished, the President walks out of the White House to the same area where the protesters had been and stands for a photo op. … In an environment where the broader debate is about heavy-handed use of force in law enforcement, was that the right message for Americans to be receiving? ...

Barr: Well, it’s the job of the media to tell the truth. They were not connected.

Barr’s full-throated defense of police-military repression of protests was echoed on the Sunday interview programs by Chad Wolf, the acting secretary of the Department of Homeland Security. Appearing on “Fox News Sunday,” Wolf said, “I think we took the right action, and what we’ve seen is we’ve seen governors deploy the National Guard. We’ve seen governors and mayors call the federal government asking for support. And that’s what we’ve given them.”

Pressed on the decision to deploy 1,600 active duty troops to the outskirts of the capital by host Chris Wallace, who asked if that was “overkill,” Wolf indicated that a military mobilization against the protesters remained under consideration. He said, “So, again, from a law enforcement perspective, I would say making sure that we keep all our tools in the toolbox ready and available is very, very important. We don’t want to take anything off the table.”

The other dominant theme of the Sunday news programs was the public opposition of prominent retired generals to Trump’s Rose Garden coup speech and the threat to bring the military against demonstrators. The most significant such statement was the column by retired Marine General James “Mad Dog” Mattis published last Wednesday in the Atlantic. Mattis, known as the “butcher of Fallujah” for his role in the homicidal destruction of that Iraqi city, resigned as Trump’s secretary of defense in January of 2019 in protest against Trump’s announced plan to withdraw US forces from Syria.

Mattis openly accused Trump of violating the Constitution and threatening to assume dictatorial powers. He was subsequently seconded by former chairmen of the Joint Chiefs Mike Mullen and Martin Dempsey, retired Marine General and former White House chief of staff to Trump John Kelly and other retired military brass.

The statements of these military officers, all of whom have been involved in bloody crimes of US imperialism around the world, were prompted not by devotion to democracy, but by concerns that Trump’s authoritarian moves would trigger an uncontrollable social explosion.

The main guest on CNN’s “State of the Union” program was Colin Powell, the chairman of the Joint Chiefs during the first Persian Gulf War of 1991 and Secretary of State at the time of the 2003 invasion of Iraq. Powell was the top military officer in 1992 when President George H. W. Bush sent in active duty troops to put down mass protests in Los Angeles against the police beating of Rodney King.

Powell, posing as a defender of the First Amendment, congratulated the former generals who criticized Trump’s actions and announced that he would vote for Democrat Joe Biden in the November presidential election.

Powell’s most significant statement in the interview was his attack on Congress for failing to address, let alone oppose Trump’s attempted anti-constitutional coup. He said:

And even more troubling, the Congress would just sit there and not in any way resist what the President is doing…

I watched the senators heading into the chamber the other day after all this broke, with the reporters saying, what do you have to say, what do you to say?

They had nothing to say.

This accurately describes the cowardice and complicity of both big business parties in the ongoing conspiracy against democratic rights that is centered in the White House. The most pernicious role is being played by the Democratic Party, the nominal “opposition” to Trump.

Not a single prominent Democrat—from Obama, the Clintons and Biden to the fake “progressives” Bernie Sanders, Elizabeth Warren and Alexandria Ocasio-Cortez—has warned the American people of the coup plans of Trump and his cabal of fascists in the White House.

This continued Sunday. Democrats interviewed on the talk shows included Senator Cory Booker, Representative Karen Bass, the chairwoman of the Congressional Black Caucus, and Representative Val Demings, a former police chief in Florida who is on Biden’s “short list” to become his running mate. None of them even mentioned Trump’s Rose Garden speech and threats to impose martial law. As the military considers its options, the Democratic Party is allowing it to become the arbiter of the people’s democratic rights.

The Democrats are no less fearful than Trump and the Republicans that the multiracial and multiethnic protests against police violence will encourage a broader movement of the working class, already slammed by mass death and unemployment resulting from the official response to the coronavirus pandemic, which will assume revolutionary proportions.