Protests and demonstrations against police violence over the weekend spread across every part of the US, involving young people and workers of all races and ethnicities in small towns and rural areas as well as major cities.

Millions marched in defiance of mass arrests, curfews, brutal attacks by police and National Guard troops and threats by Trump to call out active duty troops against the protesters. They were joined by millions more who marched in Europe, Asia, South America, the Middle East, Australia, New Zealand and Africa to protest the May 25 murder of George Floyd by police in Minneapolis, Minnesota.

According to a database maintained by USA Today, demonstrations have been reported by news media organizations in 806 towns and cities across all 50 states, plus the territories of Guam, Puerto Rico and the Virgin Islands. 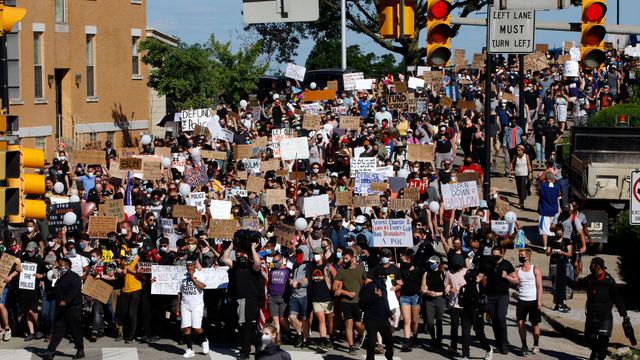 Although the USA Today tally likely underestimates the actual number of demonstrations in the US—there have been many more protests than those reported by local news media—it does provide a picture of the scale of the demand for an end to police violence and murder that has swept across the US. The greatest number of protests have been in the following states: California (64), Ohio (64), Georgia (45), New Jersey (32), New York (32), Florida (31), Illinois (31), Texas (31), North Carolina (30) and Michigan (26).

The largest protests this past weekend were held in major US cities such as New York, Los Angeles, Chicago, Philadelphia, San Francisco and Washington, DC. According to the New York Times, “Many of Saturday’s gatherings appeared larger than previous rallies, especially the one in Washington. At one point it seemed as if the entire city had emptied into downtown, as lines of protesters snaked their way through side streets while others converged in nearby parks before making their way to Lafayette Square outside the White House.”

Tens of thousands marched and rallied throughout Washington, DC in the ninth straight day of protests. The largest gathering was near Lafayette Square, which remained closed, although the armored military vehicles and large numbers of military and police of previous days were no longer visible. The 1.7 miles of eight-foot-tall chain link fencing along with white concrete barriers that formed a one-block radius around the property of the White House remained in place.

Other gatherings and protests took place in the US capital on Saturday at the Lincoln Memorial, the US Capitol, the Dirksen Senate Office Building, 14th and U Streets, Malcom X Park, Dupont Circle, Freedom Plaza and 16th and H Streets NW. There were other rallies in the surrounding suburbs, including one at the Arlington County Courthouse.

The Washington Post reported diplomatically that when the Democratic mayor, Muriel Bowser, walked down the stretch of 16th Street that bore the painted designation “Black Lives Matter,” support for Bowser “was not universal.” Protests continued throughout the city on Sunday.

Many tens of thousands of protesters marched in various parts of New York City on Saturday and defied the 8:00 p.m. curfew imposed by Democratic Mayor Bill de Blasio, although, in contrast to previous days, there was no attempt by police to disrupt the demonstrations. Mayor de Blasio lifted the curfew completely on Sunday morning and district attorneys in Manhattan, Brooklyn and the Bronx announced that they would not be prosecuting anyone arrested and accused of low-level offenses such as unlawful assembly or violating the curfew.

The New York Times reported: “All afternoon on a mostly sunny Saturday that felt like the start of summer, the overwhelmingly peaceful protesters had thronged bridges, blocked streets and shouted slogans, as motorists honked in support and the police watched. At least two dozen events crisscrossed the city, from the Bronx and Queens to Manhattan and Staten Island.”

There were reports of rallies in Washington Square Park and Central Park in Manhattan, a group of medical workers named White Coats for Black Lives rallied on the Upper West Side of Manhattan, a large eight-mile march was held in Brooklyn along with a rally at Grand Army Plaza in Prospect Heights.

Thousands of people marched across the Brooklyn Bridge into lower Manhattan. Part of the throng stopped at Foley Square where the state and federal court buildings are located. Another group of marchers walked onto FDR Drive, the main north-south thoroughfare on the east side of Manhattan, forcing the police to shut down one side of the highway.

Mass demonstrations took place on Saturday in San Francisco, the most notable of these shutting down the Golden Gate Bridge for a period of time. Thousands of people marched initially on the eastern walkway but, as the crowd surged, protesters spilled onto the southbound roadway, forcing bridge authorities to block the toll plaza with trucks. Eventually, the northbound lanes were closed as well while bridge protesters marched from San Francisco to Marin County and then turned around to go back.

The San Francisco Chronicle reported, “Around the Bay Area, throngs of people from Fremont to Santa Rosa continued to raise their voices against police brutality.” Protesters in Berkeley marched down Martin Luther King, Jr. Way and stopped traffic in both directions. In Oakland, thousands clothed in black participated in a “Walk in Unity” from Frank Ogawa Plaza to the Lake Merritt Amphitheatre.

A demonstration of tens of thousands took place in Chicago on Saturday morning, beginning with a rally at Union Park, followed by a three-mile march into the Loop that concluded with a rally on the Near North Side. On Sunday, amid a massive demonstration downtown and other protests in the metropolitan area, Democratic Mayor Lori Lightfoot lifted the city-wide curfew.

The Chicago Tribune reported: “A multiracial crowd of hundreds of people gathered Sunday morning at one of the South Side’s busiest intersections for a peaceful protest a week after unrest over George Floyd’s death spread across Chicago.

An indication of the extent to which the vast majority of the population is demanding an end to police murder in America is shown by the proliferation of protests in rural and small towns across the country, especially in the South, the former bastion of Jim Crow segregation and the Klu Klux Klan. The eruption of protests in areas identified by the political establishment and the corporate media as permanently “conservative,” “red state” or even “racist” has proven that there is a powerful integrated movement within the working class and among the youth against racism and violence by the police.

The scale and geographic sweep of the protests reflect not only the deep commitment of young people and workers to democratic rights and their hatred for the fascistic Trump government, but also growing class anger against social inequality and war, intensified by the government’s criminally negligent response to the coronavirus pandemic.

Workers are well aware that the ruling class and the political establishment care nothing for their lives, as demonstrated by the back-to-work drive even as the pandemic continues to rage. Instead, the pandemic is being used to carry out yet another massive bailout of the corporations and banks, driving the stock market back up to record heights, while tens of millions of jobs are permanently destroyed and basic social services are slashed.

Of particular significance were protests in smaller towns in the South and West of the country, including:

* Vidor, Texas, where a multi-racial group of two hundred people marched and rallied in a locality that was once known as a Ku Klux Klan stronghold and a “sundown town,” where blacks were subject to arrest or physical attack after dark.

* Sheridan, Wyoming, a town of 17,000 people on the northern border with Montana, where a “Black Lives Matter Solidarity Peaceful Protest” of 500 people was held Friday evening at the Sheridan County Fulmer Public Library. The protesters proceeded down Main Street to the Sheridan County Courthouse before returning to the library. The protest remained peaceful, despite provocations by a handful of counter-protestors.

* Norfolk, Nebraska, where 300 people protested on a busy street corner to voice their outrage at the death of George Floyd. Rally organizer Eduardo Mora, who lives in a neighboring town, said, “It was important to do it, especially in the middle of Nebraska.”

Encouraged by Trump, police rampage leaves protesters dead and wounded across the US
[6 June 2020]