Two weeks after George Floyd was murdered by Minneapolis Police officers while in custody, multiracial and multiethnic protests have continued throughout the United States demanding justice for all victims of police violence.

Despite the overwhelmingly peaceful nature of the protests, in which thousands have gathered for hours at a time from large northern metropolitan cities to rural southern towns to demand an end to police brutality, police officers across the country continue to batter, bruise, maim, beat, gas and tase peaceful protesters and journalists covering the marches across the country. 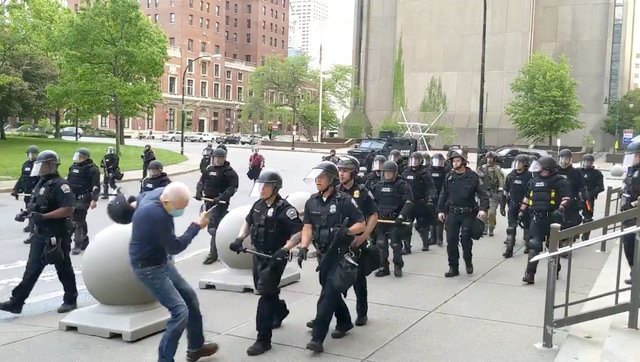 The two officers were released on their own recognizance Saturday morning shortly after turning themselves in. Upon leaving the Buffalo City Courthouse the pair were greeted by a crowd of roughly one hundred cops and their sympathizers who gave the officers, who less than 48 hours ago shoved an old man to the ground and walked over his concussed body as blood poured from his head, a round of applause.

In a Saturday press conference, Democratic Mayor Byron Brown let it be known that the political leadership fully backed the Buffalo Police Department and the two charged officers. Defending his decision not to immediately fire the officers, Brown, speaking to local radio affiliate WBEN, stated: “I don’t want to jump ahead of the investigation. It is very important for officers to know they are getting due process.”

Buffalo Police Benevolent Association President John Evans, speaking on behalf of the officers to local news outlet WBFO, asserted that the officers were “simply doing their job” and that the man had “slipped.” In a separate email obtained by Madison Carter of WKBW, Evans didn’t hold back on who he felt was the real victim: “I can tell you they tried to fuck over these guys like I have never seen in my 54 years,” Evans wrote. “It is despicable.”

Speaking to the Washington Post, District Attorney Flynn admitted he waited an extra day to charge the officers responsible for the assault out of concern that the rank-and-file police would revolt against the Democratic political establishment for attempting to hold the department to a sliver of accountability. With a curfew still in effect for the city of Buffalo Friday night Flynn stated that he “didn’t want to pour gasoline on a fire,” and was “concerned about the safety of the city last night.”

Flynn’s patience and soft touch when dealing with thuggish police stands in stark contrast to his treatment of protesters and marchers. Flynn defended his record to the Washington Post stating he has only prosecuted six police officers in three years during his time as Erie County DA, before adding, “there are some who say that I’m choosing sides by arresting and prosecuting police officers, and I say that’s ridiculous ... I’m prosecuting 39 protesters.”

Elsewhere, in Detroit, Michigan, 24-year-old protester Nadia Rohr is still recovering from a skull-splitting “less lethal” round fired at her head during last Sunday’s protest. Rohr recalls standing in front of the police line and locking eyes with an officer who then trained his bright orange 40-millimeter riot gun on her. Rohr states that once she turned away from the officer, he fired his weapon, striking her in the back of the head.

Rohr briefly remembered, “a bright pink flash of light” before “coming to, I just looked down and my feet were being dragged.” Rohr’s girlfriend, Baylee Huffman, 20, helped carry her to safety and dressed the injury. Huffman, speaking to Deadline Detroit, recalled the severity of the wound, “I looked at it and all I could see was brain matter, hair and flesh.”

Officers didn’t offer any aid to Rohr. Instead she was made to walk two miles to her parked car and then drive with her girlfriend to the emergency room at Henry Ford Macomb Hospital. Doctors determined she suffered an open-skull fracture with a concussion and brain bleed which required nine stitches. Had she not been wearing her hood up at the time, doctors hypothesize that the rubber round would have lodged itself in her brain, possibly killing her.

According to a 2017 study conducted by the British Medical Journal, out of almost 2,000 rubber bullet incidents studied, nearly 3 percent, or 60 incidents resulted in fatality while 15 percent, or 300 cases, resulted in permanent injury.

In Rohr’s case she was told by her medical team that it will take at least another three weeks before she is medically cleared to go back to work. However, a full recovery will take at least another year and a half, if ever. “I can't go swimming anymore. I can't skate anymore. I can't do any hard sports because if I hit my head again, it could be fatal,” said the 24-year-old.

In Nevada, no charges will be forthcoming against four Las Vegas Metro Department police officers who shot dead 25-year-old Jorge Gomez late last Monday night during protests. Officers originally stated that Gomez had fired at the officers after being ordered to disperse and they were simply returning fire.

The story put forth by Las Vegas police has changed multiple times since it was first reported. None of the four Las Vegas police officers, Sgt. Ryan Fryman, 40, Officer Dan Emerton, 38, Officer Vernon Ferguson, 36, and Officer Andrew Locher, 53, who fired a total of 19 rounds into Gomez, were wearing body cameras. It was also revealed that officers had fired multiple bean bag rounds at Gomez earlier in the evening.

Clark County Assistant Sheriff Chris Jones, during a June 5 press conference, hypothesized that Gomez had become “radicalized” by objective events and was allegedly spotted carrying a sign at the rally that included the words “Jail Trump” and “2A” a reference to the Second Amendment of the US Constitution. Jones stated that officers recovered three weapons from Gomez and that he was wearing a Kevlar vest when officers gunned him down.

Encouraged by Trump, police rampage leaves protesters dead and wounded across the US
[6 June 2020]