The federal Liberal-National Coalition government announced yesterday the axing of childcare subsidies that were introduced in response to the coronavirus pandemic. The move will deepen a social crisis confronting working class families amid widespread job cuts, pay reductions and high costs of living.

Education Minister Dan Tehan told the media that the scheme, introduced by the government in early April, would end on July 12. Childcare workers also would be cut off JobKeeper, a multi-billion dollar program under which the government has paid a substantial portion of the wages’ bill of private businesses.

The removal of JobKeeper pay subsidies, originally promised for six months, paves the way for sackings and wage cuts.

As the WSWS noted when the government’s childcare subsidies were unveiled, they amounted to a $1.6 billion bailout for the private corporations that dominate the sector. They were aimed at ensuring the revenue of the lucrative industry, after enrolments plummeted when COVID-19 restrictions were introduced and hundreds of thousands of workers were stood-down or laid-off.

Under the program, the government provided cash handouts of up to 50 percent of pre-pandemic revenue to private childcare operators. This was given on the basis that the centres remain open throughout the pandemic and provide fee-free childcare.

In addition to boosting the fortunes of childcare businesses, the subsidy was aimed at ensuring that broad sections of the working class, especially in manufacturing, mining and construction, remained on the job despite the health risks associated with COVID-19.

Tehan’s abrupt announcement is part of a broader roll-back of limited relief measures that were introduced when the pandemic began, and that were always geared to the interests of big business.

The decision goes hand in hand with the rapid and premature overturning of pandemic safety measures by federal, state and territory governments, Labor and Liberal alike, including the resumption of face-to-face classroom teaching. It is a component of a pro-business offensive aimed at forcing workers back into their places of employment, despite the ongoing dangers of the coronavirus, to resume corporate profit-making.

At the same time, governments, corporations and the unions are coming together to implement further pro-business restructuring of the economy, aimed at slashing wages, increasing casual and precarious employment, and clearing the way for a continuous offensive against working conditions.

The end of the childcare subsidy will intensify the hardships facing working class families. A survey of 2,280 parents by advocacy group, The Parenthood, found that in more than 60 percent of households, one parent would be required to reduce their working hours because they could not afford full childcare fees.

Georgie Dent, a spokesperson for the group, said the “return to pre-COVID fees will put an enormous amount of pressure on the sector because services will not be able to function viably if up to a third of families have to take their children out.”

Dent pointed to the social impact, stating: “We also know that is going to be really devastating for the children themselves, because they will miss out on all the proven, long-term, quantifiable benefits that kids who access early education and care derive.”

This month, Goodstart Early Learning, the country’s largest provider, conducted a survey of 33,000 families enrolled in its 665 private childcare centres. It found that 54 percent had experienced a decline in household income since March. The average reduction was a staggering 41 percent.

Some 37 percent of families said they would be compelled to withdraw their children from childcare or reduce hours if the subsidies were removed. Around 45 percent said their income would not return to pre-pandemic levels prior to the then scheduled ending of the subsidy.

The wind-back of the measure will result in a further consolidation of the largely privatised sector. The largest businesses will be able to offset the impact of any reduction in demand. They will be aided by an additional $708 million in government funding, amounting to about 25 percent of pre-pandemic revenue. A number of smaller operators will likely go bust.

The withdrawal of JobKeeper is aimed at ensuring that the brunt of the sector’s crisis will be borne by its lowly-paid workforce.

Under the scheme the government paid up to 80 percent of an employee’s pre-pandemic wage, capped to $1,500 a fortnight. The identity of businesses that successfully signed up to the program is shrouded in secrecy, but it appears that they were primarily larger corporations.

Childcare workers have reported having their hours slashed, as companies sought to prevent paying anything on top of the $1,500. Now they confront the prospect of further pay cuts, lay-offs and cuts to conditions. 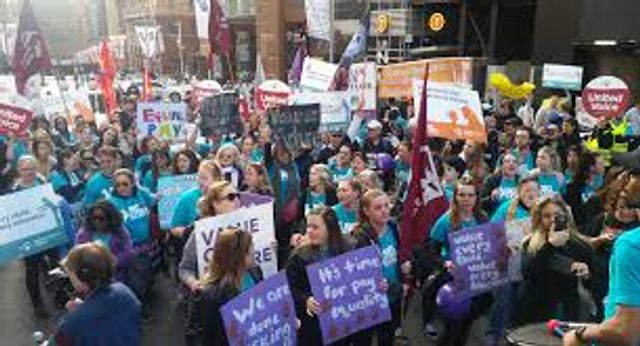 Childcare workers protest in Sydney over wages and conditions in 2018

Business commentators welcomed the government announcement. The Conversation’s Michelle Grattan wrote: “The removal of free childcare will be a big first test of the political reaction to the government winding back COVID emergency help.”

The federal Labor Party opposition cynically bemoaned the end of the subsidy, with senior ministers feigning concern over its impact on working families. Significantly, however, Labor’s childcare spokeswoman, Amanda Rishworth, condemned the move primarily because it could obstruct the corporate elite’s back-to-work campaign.

“This could well act as a handbrake on the economy,” Rishworth said. “If women and families are not able to access affordable childcare, how are they going to get back to work?”

Childcare is a massive social issue because successive governments, Labor and Liberal alike, have privatised the sector. The federal Labor government of Paul Keating began a pro-market overhaul in the 1990s. Before then, 85 percent of childcare services were provided on a not-for-profit basis. Now, almost 50 percent of the sector is in the hands of businesses.

This has resulted in some of the highest childcare costs in the world. A study by Household, Income and Labour Dynamics in Australia (HILDA) last year found that household childcare costs had increased by 145 percent since 2002. It reported that childcare costs account for a massive 27 percent of average household income.