Thousands of crew members and maritime workers were left stranded at sea around the world when the cruise shipping industry was suddenly shut down in March in response to the coronavirus pandemic. Many workers are in the same terrible situation months later.

Cruise ships are moored around the coastline of the UK, including at ports. One of the ships is the Marella Explorer. One of the crew members aboard contacted the World Socialist Web Site to explain the situation.

Around 650 Indian crew members of TUI/Marella cruise ship are still laid up in waters off Southampton on the south coast. They were put on less than half-pay in April, and plans for their repatriation have been confused and repeatedly delayed. Several repatriation flights have already been cancelled at short notice, creating further anxiety about the latest date they have been given. 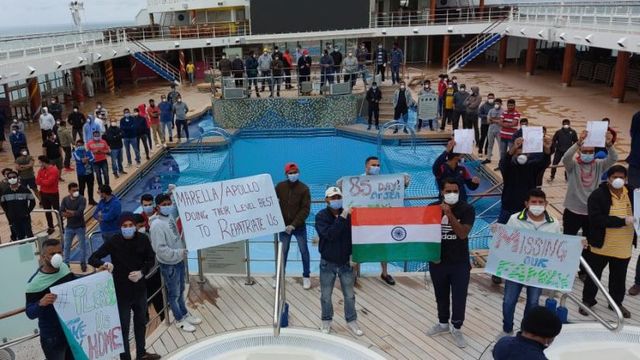 Their last guest disembarked in Mexico on March 23, after the industrywide lockdown began, and the ship then crossed to the UK. They anchored in Southampton on April 18.

A month later, on May 21, the crew member wrote, “Till now we don’t have any idea when we are repatriating back to India.” They have now been told June 14.

Ships have been stranded along the south coast of England from Southampton to Weymouth since the shutdown. Six were moored at Weymouth Bay, with the sixth arriving last month. Three are located off the Isle of Wight.

Initially, five ships were moored off Southampton, with around 4,000 crew members on board. The sudden and ill-planned lockdown imposed by Prime Minister Narendra Modi’s government prevented arrangements being made for their return.

Four ships belonged to the Florida-based Carnival Corporation, which owns the Cunard line—Azura, Britannia, Ventura, and Queen Victoria. Each had 800-1,000 crew on board. Cunard’s RMS Queen Mary 2 docked at Weymouth later. Also moored off Southampton was the TUI/Marella ship Marella Explorer.

All the ships had been taken out of service because of the risk of coronavirus. There were additional delays to repatriation when crew on the Azura tested positive for the virus.

Carnival had been working on a repatriation plan for crew but has only now been able to put it in place. Its first flight, of 280 crew of the Ventura returning to Mumbai, took place last week. Cunard and P&O have another eight flights planned.

The situation is less clear for the 500-600 Marella crew. TUI/Marella have said throughout that they are “working hard” to repatriate the crew members, but the crew are struggling with a lack of information. 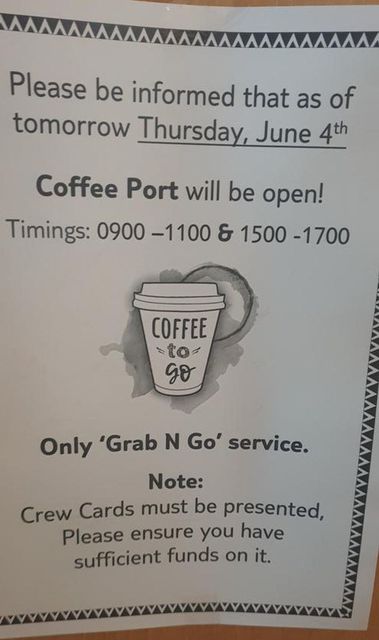 A sign announcing the opening of the coffee shop

Marella did not respond to a request for information from the WSWS.

TUI, like Carnival, moved all crew members out of their cabins in order to isolate them in passenger staterooms to minimise any risk of infection. No COVID-19 cases were recorded on board.

The crew member wrote, “About food and accommodation, company is good to take care of us very well. But we all want to go back home, as we just got full salary till March and in April we were given 40% of basic salary due to pandemic.”

Last week, TUI/Marella reopened the ship’s coffee shop. Purchases require a crew card, with money on it. As one crew member commented: “So nice the management is planning how they can earn some money from crew but what about repatriation.”

He had been desperately trying to contact Indian diplomats without success, reporting “No idea no news. Just delay every time.”

He has now posted photos of protests on board Marella Explorer. As the banners state, as of Wednesday, the crew have been at sea for 85 days. They were quarantined for 45 days.

Crew members who have commented on social media are increasingly pointing at the Indian government for holding up arrangements to return them home. One tweeted June 10 that having been stuck on the Marella Explorer in Southampton for two months, “we’ve just been waiting for a nod by our govt and our patience is running out. Pleas made by our company have been neglected multiple times.”

He was at pains to praise Marella for their support, saying “our govt has left us behind.” He protested that other Indian seafarers had been repatriated, but “our flights have been cancelled twice.”

This is not just some minor inconvenience. The crew are becoming increasingly desperate, as this video shows.

On Twitter, a crew member reports, “The mental health of the crew on board has started to take a downward spiral and so is the overall situation of our family members back home.”

The workers are concerned at the rising risk of suicide. Protracted absence on reduced wages will do nothing to ease that situation for their families.

The situation confronting crew members still stranded on board ship is worsening. On Tuesday, it was reported that a crew member had committed suicide on the RCI-Royal Caribbean ship Harmony of the Seas. The ship remains docked in Barbados awaiting charter-flight repatriation arrangements for around 2,000 crew. The nationality of the 28-year-old woman has not been revealed. The Marella crew fear that further stresses could lead to suicide attempts among their number, too.