The major US automakers are continuing their policy of covering up the spread of the coronavirus in auto plants as reports filter out of new cases in several factories.

The attempt to hide the extent of COVID-19 infection is a transparent effort to keep production going in the face of mounting workers’ anger over the danger to themselves and family members amidst a nationwide resurgence of the virus due to the ending of all lockdown measures. 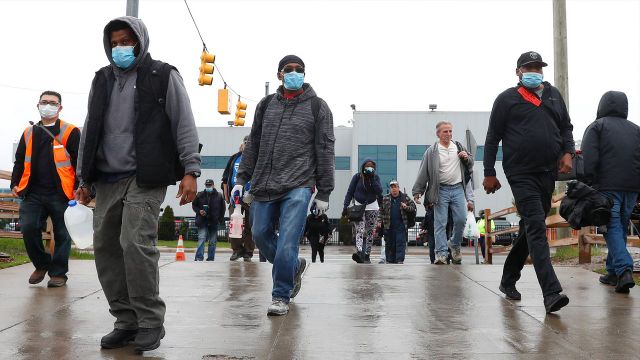 General Motors and Ford have made it an official policy not to report the number and locations of confirmed COVID-19 cases at their factories. Fiat Chrysler has also apparently stopped reporting coronavirus cases as well. GM has reported only one death, a contract worker at its technical center in Warren, Michigan, but there is no reason to trust its count.

Meanwhile, the Wall Street Journal reported that Japanese carmaker Toyota has seen 40 new cases at its US operations since it reopened factories in early May, with no indication which facilities are impacted. There have been six cases reported at electric carmaker Tesla’s massive operations in Fremont, California, and cases have been reported at parts operations such as Lear and Flex-N-Gate.

A new case of COVID-19 has just been confirmed at the General Motors Arlington, Texas assembly plant, as the facility returns to full operation this week. The factory goes to three-shift operation Monday, meaning close to 5,000 workers will be in the plant.

According to a post on the local United Auto Workers website, a worker in the chassis department at Arlington Assembly reported feeling ill on June 5 and went home. Two days later the worker tested positive for COVID-19.

GM is ramping up production at the Arlington, Texas plant outside Dallas as the coronavirus spreads rapidly in the state. Dallas County Health and Human Services reported Friday that there were 328 new cases, following several days of record-high positive cases, and there are currently almost 14,000 cases. As of Sunday, there were 87,903 cases in the state of Texas with almost 2,000 deaths.

An autoworker in Texas told the Autoworker Newsletter, “I think it’s terrible. I work for a plant right now, Lear, in Arlington, Texas. We are a supplier for GM. We build car seats. We were called back to work May 31, and on June 7 four Lear employees on third shift tested positive for the virus. The union and management kept it quiet. The employees on the third shift found out Wednesday night, June 10. We are still working just like nothing is going on. We are all afraid. How do you stop employers from hiding this virus?”

A GM worker in Bedford, Indiana said, “There are two confirmed cases of the virus that are being kept quiet. Management is not following their own rules. They keep doors closed and hide. They rarely come to work. They are forcing overtime while they cowardly stay home.”

This follows reports of at least five cases at the GM Wentzville, Missouri Assembly Plant. There has also been one new case reported at the GM Bowling Green, Kentucky factory.

Despite the increase in the number of new COVID-19 cases, the UAW has refused to demand even the temporary closure of a single plant for cleaning. UAW Local 2250 President Glenn Kage in Wentzville told the Detroit Free Press that if cases at the plant reach about 20, he will have a “serious conversation” with management. He added, “hopefully” GM will do the right thing.

UAW spokesman Brian Rothenburg issued a statement, declaring, “We are working right now with the local union and General Motors to monitor the situation in Wentzville and every other plant.” In other words, the UAW will do absolutely nothing to defend workers.

The auto companies’ refusal to be transparent about the spread of coronavirus makes it impossible for measures to be taken to prevent the spread of the virus, such as contact tracing and quarantining of exposed workers. It further confirms the well-founded belief that management does not give a damn about workers' lives, only profits.

Under these conditions, many workers, including a substantial number of older workers, have not been reporting to work to preserve their health. In response, the auto companies are intensifying their superexploitation of temporary part-time (TPT) workers, while issuing threats of loss of benefits against more senior workers who do not show up for work.

One auto parts worker in Tennessee wrote to the Autoworker Newsletter, “I work at a plant that manufactures parts for the Big 3 in Tennessee.

“Now herein lies the major concern for myself and anyone else that works in a manufacturing plant like ours. We got called back to work starting this Monday and were told basically that if we didn’t feel safe and didn’t show up, ALL of our benefits would be shut off and job terminated, along with it being sent to unemployment.”

The Tennessee autoparts worker said, “As a leader I also get the mass management emails. We’re going to be required to wear face masks, along with other PPE (i.e., cutting sleeves, gloves, eye protection) in a hot plant with barely functioning AC and fans stations six feet away (and in a plant that manufactures hot parts, it’s like having NO fan at all).

“It’s 110 percent not right, all the way up to the state level, considering we were SUPPOSED to phase back if cases spiked, and in which case they absolutely have in the last two weeks. So now, I have to go work elbow to elbow in a lot of cases and pray to God I don't bring it home to my wife and children.”

A worker at GM’s Spring Hill facility in Tennessee added, “The masks are drenched with sweat because it is so hot in the plant. [In the area I work] the [machines] throw off so much heat, my goodness, we sweat in the winter time.”

She added, “Once those masks are wet from sweat or you move them to take a drink of water, they are now contaminated.

“Then GM management wants numbers and expects you to run your butt off, and you’re sick from the heat. Three people got heat exhaustion last summer, and that was without masks.”

The worker also described how sick workers were being turned away from the plant’s medical unit, saying, “Four people went to medical and were sent back to the line because their symptoms were not BAD ENOUGH. My goodness, [the virus] takes 14 days to show up. Medical has ALWAYS been a joke, [and] it’s even more so now.”

Another GM worker employed at the Fort Wayne assembly plant (Roanoke, Indiana) wrote, “It’s a mess here. They herd us in like cattle through the same entrance, then we put our belongings on a table and there’s jumbo-sized containers of hand sanitizer that’s so watered down that any cut on your hand does not sting.

“We pick our dirty belongings up from the table and then we move down to another table and receive our mask. Then someone sitting in a chair takes our temperature (with a gun that we learned gives false readings) from 10 feet away. Then once we get to our workstation, we’re given 6 minutes to clean our area with a disinfectant that says you have to let it sit for 10 minutes.

“We just had a positive case confirmed Wednesday. We didn’t shut down. We went to break 30 minutes early and they wiped her desk off but not any of her tools, materials, parts or trucks. Two people from her team are being made to quarantine, but the guy here who has had the most contact with her wasn’t even tested and is out here working with everyone."

A veteran worker at the Ford Chicago Assembly Plant reached out to the Autoworker Newsletter after hearing how fellow workers at the Ford Kentucky Truck Plant were threatened with job losses by the UAW if they did not report to work under unsafe conditions.

"I will walk out if I feel uncomfortable or unsafe," he told the Autoworker Newsletter. "The union is no good [and] never will be. I have seen a lot of backhanded BS go on in my 35 years.

“At Ford Chicago Assembly, they are making us work days shift Monday through Friday, 11 hours for day and night shifts [A crew and B crew]. C crew is working half on days and half on nights to cover people not coming to work. Forty percent of the regular day’s shift has not come to work, so they split up C Crew to cover both shifts.

“When they get enough workers to run for the day or night shift, they are sending some home on a 3.9-hour shift or less. After you go through all the mess to get into work, the company or the union doesn’t do anything about people not wearing the masks, no social distancing and no cleaning. It’s like ‘the virus is gone,’ and we know it’s not, but Ford and the union people think that way.”

The auto companies’ single-minded focus on production and the lack of any genuine representation for workers on the part of the UAW raise sharply the need for workers to organize independently to safeguard health and safety. The Socialist Equality Party and the WSWS Autoworker Newsletter call for the building of rank-and-file factory committees to enforce safe working conditions in the plants, including the full disclosure of coronavirus cases, testing, contact tracing and adequate rest time. If safe conditions cannot be maintained, workers should assert their right to stop production.