Though for many countries, COVID-19 seems a permanent fixture of their national affairs, only six months have passed since the world was first made aware of the novel coronavirus. The pandemic continues almost unabated in its course, wreaking havoc and mayhem on any community that does not take the appropriate countermeasures.

According to Worldometer, India, Brazil, and Mexico had higher death tolls than the US yesterday. The number of new daily cases worldwide has been persistently more than 100,000 since May 27. Today, the total number of cases will exceed eight million, of which over 3.4 million continue as active cases, and over 435,000 people have perished, representing 5.4 percent of all known infections. 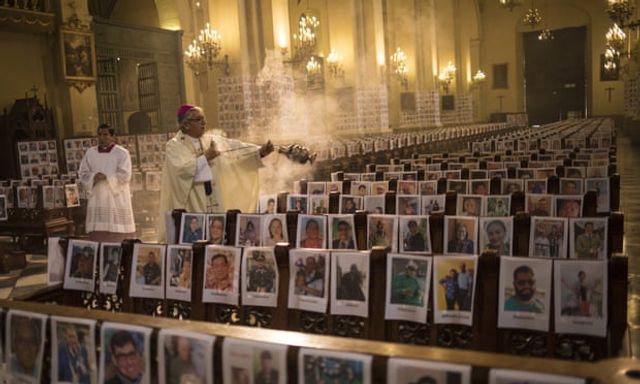 The rapid increases in Brazil, India, Russia, Chile, Pakistan, Peru, South Africa, Saudi Arabia, and Mexico indicate a broadening of the pandemic as it settles in geographic areas with excessive poverty. The per capita fatality rates for countries in Latin America are rising with reported time to peak still several weeks away.

Despite Europe's efforts to contain the epidemic, several countries remain in the precarious position of having persistent daily cases. The United Kingdom reported 1,425 cases on Saturday. Spain, France, and Italy had 396, 346, and 526 new cases, respectively. Sweden, whose national epidemiologist has gone on record that their lax measures led to unnecessary deaths, had 686 new cases on Saturday.

Latin America accounted for nearly 50 percent of all new daily COVID-19 deaths though it makes up only 8.42 percent of the world population. Dr. Carissa F. Etienne, the director of the Pan American Health Organization, warned last week that the crisis in Latin America has "pushed our region to the limit." Brazil has the second-highest death toll, with over 43,000 deaths officially confirmed. Conditions in Brazil are reportedly so ominous that last week, the New York Timeswrote, "that some of the most powerful military figures in Brazil are warning of instability—sending shudders that they could take over and dismantle Latin America's largest democracy." The president’s son, Eduardo Bolsonaro, told a prominent blogger a military takeover was coming: "It's no longer an opinion about if, but when this will happen." Peru, a country of 32 million people, is in desperate crisis as measures to contain the virus early on have proved ineffective. After 230,000 COVID-19 cases and nearly 7,000 deaths, President Martin Vizcarra has extended the lockdown until July.

Experts have cited the country's vast informal economy that accounts for 70 percent of the workforce, according to the Financial Times. Necessity forces these workers into crowded public markets to sell their goods. In Latin America, informal workers account for half of the workforce. Therefore, the measures taken by the US and EU nations to contain the outbreak are much harder to impose or regulate in Peru or developing countries. People living close quarters in squalid conditions and without access to adequate healthcare are made vulnerable to the coronavirus' indiscriminate attack.

Many policymakers are already forecasting that the economic fallout for these regions will throw millions of people back into poverty. Social tensions may spark another wave of protests that shook the area in November of 2019. According to IMF's western hemisphere department director, Alejandro Werner, "It's going to worsen the already unequal income distribution and poverty levels. When the sense of emergency is gone, we may see a forceful return of social discontent throughout the region."

In the United States, the Centers for Disease Control and Prevention (CDC) warned that the imposition of strict controls might be necessary if the number of cases increased dramatically but have mostly ruled out any future lockdowns. In a press briefing from Friday, CDC Director Robert Redfield said, "I know the people are eager to return to normal activities and ways of life. However, it is important that we remember that this situation is unprecedented and that the pandemic has not ended. As I said earlier, it is going to be critical to continue to embrace the principles of social distancing, hand hygiene, and wearing a face-covering in public. That is why today we are releasing some commonsense suggestions people can take to reduce their risk as their communities open up and they reengage in daily life and attend larger gatherings." These new guidelines come as the country is seeing a spike in COVID-19 cases – notably in Florida, Arizona, the Carolinas, and California – with each state reporting more than 1,000 new cases. 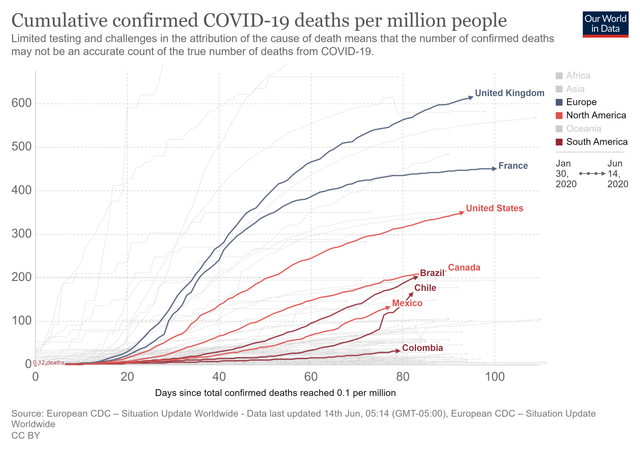 On Saturday, the US tallied another 25,302 cases and 702 deaths, bringing its total to 2.14 million cases with 117,527 fatalities. Presently, there are 1.25 million active cases. California has exceeded 3,000 daily cases for the last three days. Arizona's total identified cases climbed to 34,458 on Saturday, a 4.7 percent increase over Friday. Yesterday, the state reported 1,540 new cases. Florida posted 2,625 new cases on Saturday, an almost 30 percent increase from the previous day as case numbers have started to accelerate.

The Florida Department of Health analyst who was fired last month for refusing to falsify reports told NPR, "When I went to show them what the report card would say for each county, among other things, they asked me to delete the report card because it showed that no counties, pretty much, were ready for reopening, and they didn't want to draw attention to that." They asked her to make the data look as if the state was ready to open. This begs the question, how is knowingly withholding critical information that could help prevent loss of life any different from the cover-up of an outright murder by cops in a police precinct? Except that thousands are at risk at the same time, not just individuals.

President Trump will go ahead with his campaign rally next week in Tulsa, Oklahoma, moving it to one day after June 19, better known as Juneteenth, the day commemorating emancipation from slavery in Texas in 1865. Despite low cumulative numbers of COVID-19 cases, Tulsa saw 82 new cases on Saturday, a new daily high. The Trump rally is being held indoors in a 19,000-seat arena. The campaign will ask attendees to sign waivers absolving them of any legal responsibility should they become infected. With large crowds expected and much shouting and cheering, and not wearing masks a virtual badge of honor for the Trump supporters, a new contagion vector is inevitable.

China has returned into the spotlight this weekend with 51 confirmed local cases in an outbreak that started at a Beijing food market. Only last month, the Stalinist propaganda machine had used the success against the virus to restore pre-pandemic national confidence. President Xi Jinping had offered conciliatory words, "Great historical progress always happens after major disasters. Our nation was steeled and grew up through hardships and suffering." 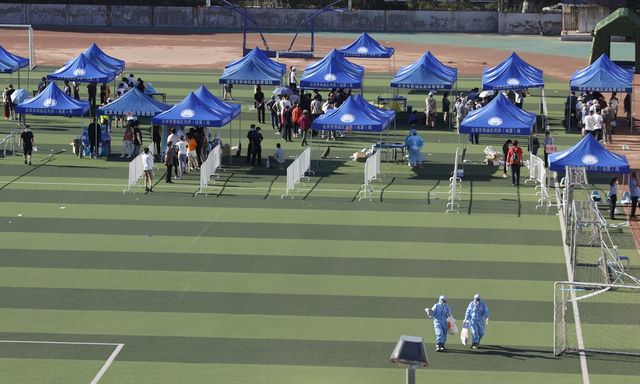 News of the new outbreak seemed to pierce forgotten but still unhealed wounds as shock reverberated throughout the country. Immediately talk of the second wave of coronavirus caught the populace's imagination.

Beijing quickly began the forced lockdown of several residential compounds and the Xinfadi market, the largest fresh seafood and vegetable complex of shops and stores in the city, located in the western district of Fengtai. China had been 55 days without documenting a new case. Now more than 100 people are in quarantine, more than 10,000 have been tested, and close to 50,000 are to be tested. Health authorities have reported two new cases in Liaoning with ties to residents in Beijing. Samples from cutting boards used to prepare imported salmon returned positive, promoting new conspiracy theories.