The death of Rayshard Brooks, the 27-year-old black man shot by a white Atlanta, Georgia police officer Friday night, has been ruled a homicide by the Fulton County medical examiner’s office. The medical officials reported in a statement Sunday evening that the young man died from blood loss and organ injuries caused by two gunshot wounds to his back.

Brooks was shot and killed in the parking lot of a Wendy’s restaurant as he was running away from police after he had failed a sobriety test and resisted arrest. His murder has fueled the mass protests against police violence and racism that have taken place in all 50 states and dozens of cities internationally since the police murder of George Floyd in Minneapolis, Minnesota on May 25.

Atlanta’s police chief, Erika Shields, resigned over the shooting on Friday night, and Officer Garrett Rolfe, who shot and killed Brooks, was fired the same evening. The second officer involved in the incident, Devin Brosnan, was put on administrative leave.

Police body camera footage and bystander video show that Brooks had grabbed a Taser from one of the officers as they wrestled with him and fired it wildly behind himself while in full stride away from Officer Garrett Rolfe, who was pursuing the young man on foot and drawing his handgun.

Rolfe then lifted his pistol and fired three shots at Brooks, who dropped and lay bleeding to death in the parking lot. Rolfe and another officer took the time to collect the spent bullet shells from the ground before administering medical aid to Brooks.

Prosecutors are expected to decide by the middle of this week whether to bring charges against the officers involved in the killing of Brooks. Fulton County District Attorney Paul Howard stated Sunday, “[The victim] did not seem to present any kind of threat to anyone, and so the fact that it would escalate to his death just seems unreasonable.” 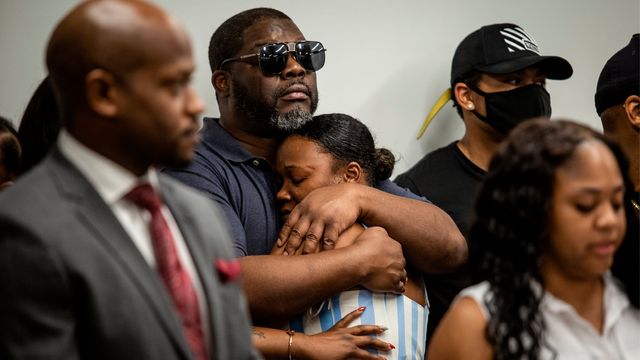 Chassidy Evans, the niece of Rayshard Brooks at a news conference held by members of Brooks' family on Monday, June 15, 2020, in Atlanta. (AP Photo/Ron Harris)

The family of Brooks, including his widow Tomika Miller, held a press conference in Atlanta on Monday morning where they thanked all who have protested since he was shot and killed. “His name will forever be remembered,” Miller said. “There is no justice that can ever make me feel happy about what’s been done.”

Brooks leaves behind a stepson and three daughters, one of whom was supposed to be celebrating her birthday on Saturday morning. A lawyer for the family told reporters, “They had a birthday party for her… with cupcakes, while we were sitting there talking to her mom about why her dad’s not coming home.”

A protest organized by the Georgia NAACP followed the press conference on Monday morning, a “March on Georgia” demonstration that began at the Richard B. Russell Federal Building and brought approximately 800 demonstrators to the Georgia State Capitol building.

In an interview with CBS news, Miller spoke about the officer that killed her late husband. “If it was my husband who shot them, he would be in jail. He would be doing a life sentence. They need to be put away.” Regarding the killing, she said, “Even though everything happened so fast, it wouldn’t take nothing but a split-second for the other officer to say, ‘Hey, calm down.’ He could have told his partner to ‘Calm down.’ I think that all of them need to be sentenced the same way.”

Chris Stewart, an attorney for the family, criticized the police officer for firing his handgun in the crowded Wendy’s parking lot. A man present on the scene has provided photographic evidence that his car, which was in the parking lot on the night of the killing, was struck by one of the three bullets that Officer Rolfe fired on the evening of the killing. Stewart noted that Rolfe could have caused another death if that third bullet had landed just a few inches higher than it did.

This week marks the fourth in which mass demonstrations are being held over police brutality. Mando Avery, whose seven-year-old son had mace fired directly into his face by a Seattle police officer earlier this month, an incident that was caught on video and went viral on social media, recently spoke publicly about the attack on his son.

“I would say that you were targeting my boy. I don’t know if you were trying to set an example and strike fear into him, but you did a great job. No officer who’s paid to protect chose to stand up, break the ranks, [and] go help the child. I just don’t understand how any of them can sleep.”

Since protests began last month, demonstrators have been teargassed, beaten, hit with rubber bullets and kettled by police all over the United States. Thousands have reported injuries, some life-threatening. In Seattle alone, where Avery’s son was viciously attacked, the city’s office of police accountability reported at least 12,000 complaints during the first weekend of protests. Thousands have been arrested, many of whom now face significant time in jail.

Democratic Party leaders are now seeking to co-opt the protests with promises of derisory and dubious reforms as a solution to the unending wave of state violence in the US. Some of these reforms would provide more resources and funding to police departments, which is the complete opposite of the call to defund the police that many protesters are raising.

Stacey Abrams, a former minority leader of the Georgia House and candidate for governor, who is now a contender to be the vice presidential running mate of former Vice President and presumptive Democratic Party presidential nominee Joe Biden, has stated that more money should be allocated to social services, along with “comprehensive” police reform.

“What happened [Friday] to Rayshard Brooks was a function of excessive force,” Abrams said, adding that officers who “were either embarrassed or, you know, panicked led them to murder a man who they knew only had a Taser in his hand.”

Atlanta Mayor Keisha Lance Bottoms, another contender to be Biden’s running mate, stated at a news conference, “What has become abundantly clear over the last couple of weeks in Atlanta is that while we have a police force full of men and women who work alongside our communities with honor, respect, and dignity, there has been a disconnect with what our expectations are and should be, as it relates to interactions with our officers and the communities which they are entrusted to protect.”

Bottoms also reported that a “policing task force” met for the first time last week and will offer recommendations on reforms moving forward. She announced plans to sign a series of administrative orders aimed at examining the Atlanta Police Department’s use of force and requiring “de-escalation” in police encounters.

Both of these figures, who are using the protests in an effort to boost their chances at becoming the vice-presidential candidate for the Democratic Party, not only defend the police as a necessary institution for capitalist exploitation and control of workers, but Bottoms in particular denounced the multiracial character of the protests in her city.

Last week, congressional Democrats released their “Justice in Policing 2020” bill, which they described as “transformational” and “bold.” In reality, as the WSWS explained, the bill is a political maneuver designed to cover for Democratic political officials who have overseen brutal police attacks on protesters and operate police departments that routinely brutalize and kill. The major provisions in the bill include measures like changing the wording of statutes, requiring body cameras for federal uniformed police officers, and limiting the application of the qualified immunity doctrine for police officers.

Qualified immunity has been used over the past few decades to throw out lawsuits against police who break the law or use unwarranted force. The Obama administration repeatedly intervened in Supreme Court cases to uphold the blanket use of qualified immunity to shield killer cops from civil suits and criminal prosecution. This Monday, the Supreme Court declined to take a case reviewing this legal doctrine, upholding this key legal protection for killer cops.

In response to the Democrats’ toothless reform bill, the White House has announced that President Donald Trump will sign an executive order today on policing and “co-responders,” which will look at ways to “bring the community and police together.”

Ja’Ron Smith, an adviser to Trump, explained that “co-responders would allow for police to do their job but bring in social workers and experts that deal with mental health and deal with issues such as drug addiction.” It appears that the order will mainly lean on local lawmakers to “encourage” police departments to embed such professionals in their response to police calls, meaning that the  executive order will be even more vacuous than what is being proposed by Democrats.

Workers and young people must reject the premise foisted upon them by Democratic and Republican Parties that the police are neutral arbiters who exist to “serve and protect.” As Friedrich Engels insisted over a century ago, the capitalist state is a coercive instrument employed by the bourgeoisie to defend its rule and to oppress the working class. The police are a central arm of the capitalist state, a special body of armed men, who exist to enforce the interests of the ruling elite.

The only way to put an end to police brutality and imperialist violence is the revolutionary mobilization of the international working class guided by a socialist program to overthrow the capitalist state and dismantle all of its oppressive agencies, including the police and the military.