The return to work policy and the suspension of all measures to contain the coronavirus is the new accepted reality advanced by Brazilian politicians, the media and the corporate-financial elite. They are not shaken by the eruption of new cases and deaths from the disease, which, according to official numbers, has killed 45,000 people in Brazil.

A video commercial published by Bradesco Bank declares: “Everyone understands the importance of staying home now. But we know that this was not possible for you.” It then presents images of workers at industries, cleaning, health care, delivery and a several other services, including, of course, their own bank employees: “People who wake up early, who work hard, who take risks. People who are doing what needs to be done”.

In the name of resuming the flow of profits to banks and shareholders, these workers are being sent into extremely unsafe workplaces that are contaminated with COVID-19. Those workers then bring the disease home to their families and neighbors. This is what has guaranteed the “best May since 2009” for the Brazilian stock market. 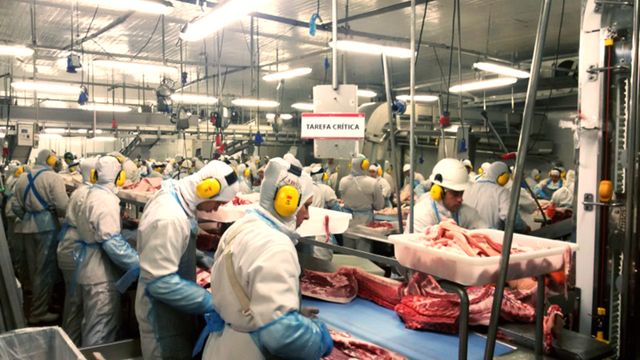 Outbreaks of coronavirus are taking place in large companies, impacting hundreds of thousands of workers across the country. Cities built around large meat processing plants and mines are suffering from mass contamination.

A report published by the Taquari Valley University (Univates) in Lajeado, a city with a high concentration of meat-processing plants in the interior of Rio Grande do Sul, concluded that the contamination rate in the city is 14 times higher than in the rest of the state. Among the more than 16,000 workers in meat plants, the chance of being infected is 207 percent higher.

In early May, a BRF Foods plant in Lajeado was closed by the State Labor Department (MPT) for posing a serious risk to the city’s health. It was reopened eight days later, after a plea deal involving the allocation of 1,200,000 reais (around US$ 230,000) to local hospitals.

The same pattern is repeated in meat-processing plants across Brazil. In Mato Grosso do Sul, in the central region of the country, the MPT has already given notice to more than 30 industries in the sector for not following the most basic health recommendations.

One of the worst outbreaks in the state occurred at the JBS factory in Dourados, where more than 400 of the approximately 4,000 employees tested positive for COVID-19.

The indigenous reservation of Dourados, the largest concentration of indigenous people in the country, where around 16,000 people live, already has 86 confirmed coronavirus cases. Community transmission at the reservation started after a resident who works at the JBS plant became contaminated at work.

In an emergency statement, the Guarani & Kaiowá indigenous leaders warned that the population of the reservation, which lacks health infrastructure and adequate housing, “stands in the face of yet another massacre with the arrival of COVID-19.”

JBS responded by sending home the infected workers and indigenous people working in the plant and continuing the production as before, claiming it follows “a strict protocol for controlling and preventing the disease.” They also announced a donation of 21,000,000 reais (around US$ 4,000,000) to the public health care system of Mato Grosso do Sul, to “compensate” for the devastation it is causing.

The already terrible working conditions in the Brazilian meat-processing plants may worsen. On behalf of the meat corporations, Federal Deputy Celso Maldaner of the Brazilian Democratic Movement (MDB), is proposing the elimination of legally-required breaks for workers working under low temperatures in the meat plants.

Another series of outbreaks of COVID-19 occurs in the cities where Companhia Vale do Rio Doce carries out its mining operations. In Canaã dos Carajás, in the state of Pará, where Vale’s largest complex and the world’s largest iron mine are located, the rate of COVID-19 contamination among its inhabitants is almost 4 percent. In June 10, the city had 1,417 confirmed cases for a population of 36,027.

After the company carried out rapid tests among its employees, the various cities in Minas Gerais where Vale carries out its explorations revealed high levels of contamination. In Itabirito, out 100 confirmed cases, 94 are of Vale employees. In Ouro Preto and Barão dos Cocais, miners account for about 80 percent of confirmed cases.

Vale’s mining complex in the city of Itabira—where around 10 percent of the company’s production is carried out—was shut down by the MPT for the second time on June 6, after a surge of dozens of new coronavirus cases among the approximately 5,000 workers. At the end of May, the complex had already been closed after a report showed more than 200 had been infected.

The working conditions exposed by the investigations are totally unsafe: workers are crowded at shift changes and are transported in tightly-packed vans. Operation inside closed cabins is also a potential risk factor, which helps transform mines into COVID-19 breeding grounds.

The workers of the National Steel Company (CSN), the largest steel company in Brazil and Latin America, are also under high risk. The MPT requested the closure of a CSN mine in the city of Congonhas, which was denied by the courts. According to the MPT, a health investigation “found flaws in the protective measures, agglomeration in transport and lack of distance between workers in some points of the company, such as cafeterias.”

Even in the company’s offices, located in São Paulo, employees reported that the company is keeping its on-site activities operating under unsafe conditions, such as lack of proper cleaning and crowded cafeterias, even after dozens of employees had been contaminated.

There is growing anger among the CSN workers, who, in addition to the high risk at work, receive very low wages. In Volta Redonda, where their main mill is located, workers were furious at the beginning of the month with the signing of an agreement by the union that freezes wages for two years.

In hundreds of comments on the Internet, workers have denounced the online voting process as a fraud. They claim that they were coerced by high-ranking employees to vote against the strike and threatened with being fired if they voted in favor. “The voting, as always, is manipulated, we were not allowed to follow the process. I can’t believe the workers accepted that. You can’t trust this union,” said one worker.

The situation of workers at the meat and mining plants is just one case of many. Workers’ lives are in danger in most workplaces.

Last week, Petrobras workers held demonstrations in front of the Presidente Bernardes Refinery in Cubatão, São Paulo, where more than 130 oil workers were infected and three died from COVID-19. According to Petrobras, there are more than 1,000 confirmed cases among employees across the country.

There is an urgent need for rank-and-file workers to organize safety committees at workplaces all around the country, to develop safety procedures and regulations and inspect their implementation. We urge workers to read our statement, “Build rank-and-file factory and workplace committees to prevent transmission of the COVID-19 virus and save lives!” and contact us.