The BBC’s Sitting in Limbo: Compelling dramatization of the anti-migrant Windrush scandal

The BBC’s Sitting in Limbo is a dramatisation of the real-life story of Anthony Bryan, who was caught up in the anti-migrant Windrush Scandal and almost deported. Anthony had lived legally in the UK for 53 years.

Like many migrants of his generation, Anthony arrived in Britain from Jamaica on his mother’s passport. The year was 1965 and he was eight years old. Between 1948 and 1973, workers from the colonies were invited to the “Mother Country” to answer the labour shortage in the UK. Migrants from the Caribbean, especially Jamaica, Trinidad and Tobago and Barbados, came to be known as the Windrush generation, after the ship MV Empire Windrush, which landed 500 Jamaicans at Tilbury, Essex on June 22, 1948. 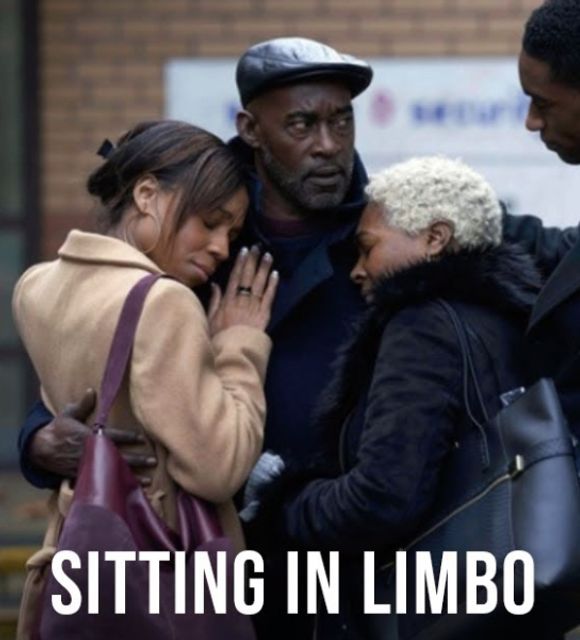 The 1971 Immigration Act granted post-war Commonwealth immigrants leave to remain in the UK, but did not issue them any paperwork or keep records. Draconian legislation passed by the Conservative-Liberal Democrat coalition in 2012 demanded proof of residency to obtain healthcare, open a bank account, get a job or rent a home. According to the Migration Observatory at Oxford University, 50,000 people were left in limbo, without regularised residency status.

The opening sequence presents some bald facts in regard to the anti-migrant agenda pursued by all of Britain’s main parties.

In 2007, the Labour government first used the term “hostile environment” when discussing the polices to be adopted regarding undocumented migrant workers. 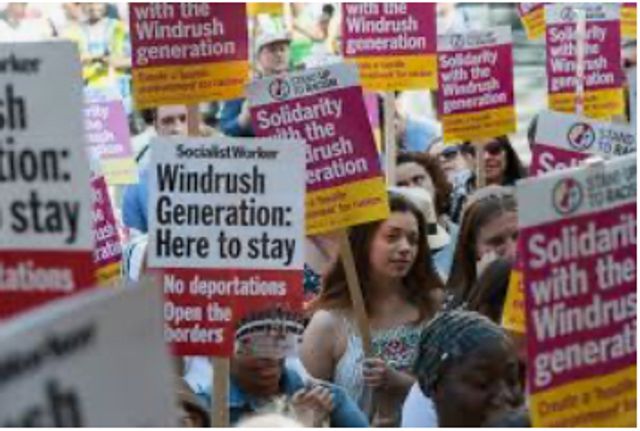 The drama then introduces us to the characters. The year is 2016, the place Edmonton in North London, a family gathering. The occasion is Anthony’s birthday. There is good food, reggae music and the company of friends. This is a happy family.

The affection between Anthony and his partner Janet is clear. His mother Mama Lou, who retired 10 years previously to her place of birth in Jamaica after working 30 years in Britain’s National Health Service, sings Happy Birthday on Skype. Anthony promises to visit just as soon as he gets a passport.

Little do they anticipate the Kafkaesque nightmare to come.

The film cuts to news footage at the time. Cameron is shown declaring, “We would like to see net immigration in the tens of thousands, rather than in the hundreds of thousands.”

Then Home Secretary Theresa May mounts a rostrum emblazoned with the Tory mantra “For Hardworking People,” to announce, “We will soon publish the Immigration Bill… which will make it easier to get rid of people who have no right to be here.”

Anthony Bryan works hard as a painter/decorator, has paid his taxes, brought up a family and now has grandchildren.

Vicious anti-immigrant measures were introduced in the aftermath of the 2008 banking crash and subsequent bailout, to try and divide the working class by scapegoating ethnic minorities for the austerity that followed. 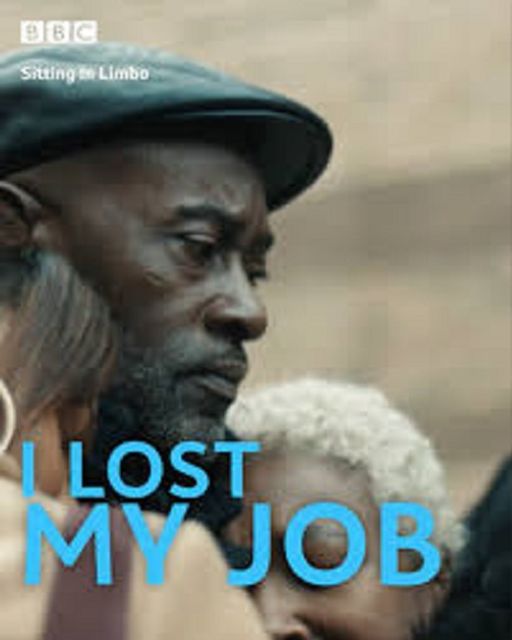 The problems begin for Anthony (Patrick Robinson) after he applies for a passport. On his way to work, a Home Office Immigration Enforcement van passes by. His employer has received a letter from the Home Office and breaks the bad news: “You’re not eligible to work in the UK. You’re not a UK citizen.”

We follow Anthony to Beckett House Immigration Reporting Centre. Treated like a criminal, he must report once a fortnight. The immigration official requests Anthony’s birth certificate and mother’s passport to prove his residence in the UK since 1965. The passport was lost years ago.

Anthony faces a wall of bureaucracy and red tape. Any request for help or information is met with, “We are not at liberty to disclose that information … It’s up to you to provide evidence to support your claim that you have lived here since 1965.”

In one scene, Anthony’s partner Janet (Nadine Marshall) arrives at Beckett House with a file stuffed with documentation proving his right to citizenship, with family photos showing that Gary (C.J. Beckford) and Eileen (Pippa Bennett-Warner) are his children, a testimonial from his headmaster and so on. It is never enough.

The Home Office, now under Amber Rudd, is working towards achieving removal targets, urging officials to deport the “low-hanging fruit.” When the scandal erupted in April 2018, Rudd, after first lying to parliament about the existence of targets, was forced to resign.

Anthony’s first detention is terrifying. On the morning of September 12, 2016, there is loud hammering on the front door followed by the command: “Open up! Immigration!” He is arrested on suspicion of being an illegal immigrant and sent 166 miles from London to the Verne Detention Centre in Dorset.

After two and a half weeks Anthony is released, with no explanation. His ordeal, however, is not over.

The torture is played out over three years, during which time Anthony loses his home due to rent arrears, is detained again and only rescued from imminent deportation when family and friends raise £1,500 for a solicitor. Even after a court case where the judge grants indefinite relief against the deportation order and excoriates the Home Office, the threat of deportation looms.

The drama nears its end with now Prime Minister Theresa May apologising profusely through crocodile tears. “We are putting it right,” she declares.

The film puts the record straight:

“In April 2018, it was revealed that in 2010 the Home Office destroyed the landing cards of thousands of Windrush immigrants. Later that year, the Home Office admitted that they were responsible for wrongfully detaining at least 850 people between 2012 and 2017. In 2019, 83 were deported, and at least 13 died before the Home Office acknowledged their mistake. In May 2020, the Home Office revealed 1,275 applications for the Windrush Compensation Scheme. Only 60 received any compensation.”

On June 1, Anthony Bryan was offered compensation for only one part of his application to the Compensation scheme, for unlawful detention.

Thompson has written a tight script, without undue sentiment or hyperbole. The dark events are punctuated with humour. On reading the script, actor Patrick Robinson, who convincingly plays Anthony, was moved to tears. Nadine Marshall plays Anthony’s gentle though indomitable partner Janet McKay to perfection. The drama is directed sympathetically by Corradi, whose use of muted colour exuding a warm glow in the domestic scenes expresses the film makers’ partisanship for Bryan and his family. The viewer feels abhorrence for the injustices meted out to the Windrush generation.

This drama will deservedly attract a wide audience, airing at a time of deep anger in the face of police violence, racism and social inequality, which, triggered by the heinous murder of George Floyd in the United States, has led to mass protests in the UK as part of a global outpouring of class solidarity.

Sitting in Limbo was first shown on BBC1 June 8. It is available now for 11 months on BBC iPlayer.