One month after the reopening: COVID-19 rips through US states and workplaces

One month since the resumption of manufacturing activity throughout the country, it is clear that the Trump administration’s campaign to prematurely force workers back on the job has resulted in a major resurgence of COVID-19.

Twenty-one states in the South and the West are seeing a sharp rise in infections, hospitalizations and deaths. Ten states—Alabama, Arizona, California, Florida, Nevada, North Carolina, Oklahoma, Oregon, South Carolina and Texas—have recorded their highest seven-day averages since the pandemic began, according to a CNN analysis of data from Johns Hopkins University. 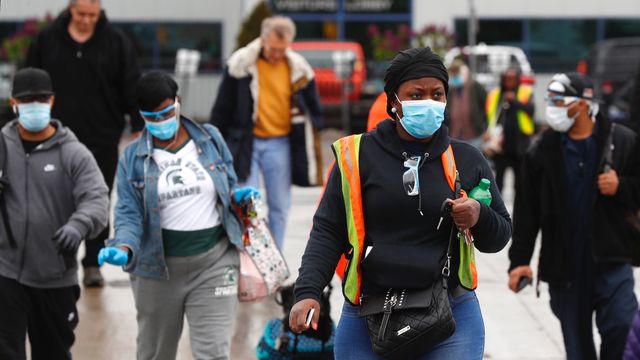 US factories and other large workplaces have been a major vector for the spread of the deadly disease. On Thursday, Ohio Governor Mike DeWine announced that at least 200 of the 829 workers at a Dole Fresh Vegetables plant in Springfield, Ohio had tested positive for COVID-19, with more results to come. The company issued a standard statement that the safety of its employees and the community were “top priority,” before announcing it would not close the plant.

In the meatpacking industry, more than 25,000 workers have been infected and at least 91 have died. These numbers have increased five-fold since President Trump issued an April 28 executive order reopening slaughterhouses and meat processing plants after the spread of the contagion closed dozens of plants.

At the same time, Trump approved requests by 15 poultry plants, including those owned by Tyson Foods, to squeeze workers even closer together on production lines and increase line speeds by 25 percent, according to a report released Wednesday by the National Employment Law Project (NELP). Half of these plants have seen spikes in cases, with at least one fatality.

As for the supposed safety measures adopted by the meatpacking companies and the Trump administration, “It’s all smoke and mirrors,” said Debbie Berkowitz, a former Occupational Health and Safety Administration (OSHA) advisor, who now directs NELP’s worker health and safety program.

Since the reopening of the auto industry on May 18, there have been scores of infections, including at Ford plants in Chicago, Dearborn, Michigan and Kansas City, Missouri; General Motors plants in Arlington, Texas and St. Louis; and Fiat Chrysler plants in Toledo, Ohio and the Detroit area. Toyota has reported 40 cases in its US plants.

At least four workers have tested positive at Tesla, which reopened its Fremont, California plant last month after billionaire owner Elon Musk blackmailed county officials into lifting lockdown orders by threatening to move his operations to Texas or Nevada. A Tesla employee, Carlos Gabriel, who demanded the release of information about infections and safety precautions, was informed earlier this week that he is being terminated today.

In a Reuters article Thursday headlined “Automakers report no major COVID-19 outbreaks since restart,” a top UAW official claimed there were few, if any, cases in the factories and blamed these on workers. Reuters wrote: "'People leave work and then they have their own protocols outside of the workplace,' said Gerald Kariem, UAW vice president and director of the union's Ford department. But in terms of the workplace, the protocols are probably better than the protocols that you'll see out in the general public.'"

These are bald-faced lies.

While the UAW, the auto executives and the media conceal outbreaks in the factories, autoworkers have informed the World Socialist Web Site about the real conditions in the auto plants. “I work for LINC/Universal and we warehouse parts for General Motors Fort Wayne plant work, right across the street,” wrote one auto parts worker. “So far, there have been five confirmed cases with COVID-19 and there is a possibility of 20 more. The GM bigwigs at the Fort Wayne plant have told our bigwigs and bosses at LINC that they do not care how many people get sick, they will not be shutting down no matter what.”

As production of the most profitable vehicles has increased and summer shutdowns have been canceled, workers have reported to the WSWS that the half-hour down time before and after shifts for cleanup has been abandoned, bathrooms are once again filthy, and workers are being piled into entryways, work stations and break rooms.

As in the meatpacking industry—where many plants are experiencing a 30 to 50 percent absenteeism rate—thousands of autoworkers are staying away from the factories out of concern for getting sick and bringing the virus home to spouses and children. As the Reuters report noted, “At Ford Motor Co.'s F-Series pickup truck plant in Louisville, Ky., the company has given more than 1,000 workers leave related to COVID-19 concerns. It hired temporary workers to fill their jobs as the plant accelerates production of trucks critical to Ford's financial recovery.”

After allocating over $6 trillion to bail out Wall Street and major corporations with the bipartisan CARES Act, the American ruling class intends to pay for the increased debt by ruthlessly pumping out surplus value from the labor of the working class. The Federal Reserve is spending trillions to purchase bad corporate debts—including the junk bonds of Ford—while the Trump administration threatens to cut off the $600 weekly addition to unemployment benefits in order to force workers back into infected factories.

The Socialist Equality Party urges workers to elect rank-and-file safety committees in every factory and workplace to fight for the protection of workers in opposition to management and the profit principle. These committees must fight for control of working hours and line speed, as well as full access to protective equipment, safe and comfortable working conditions, regular testing, universal health care and guaranteed income. They must ensure the distribution of information, protect workers against retaliation for exposing unsafe conditions, and reserve the power to halt production to guarantee safe conditions.

Workers all over the world face the same conditions that are shown in the damning video sent to the WSWS from Mexican workers at GM’s Silao complex, along with reports of alarming infections among Polish coal miners, Chilean copper miners and meatpacking workers in Germany and Brazil. The fight against the pandemic requires the international unity of the working class and all those committed to defend human life in opposition to all forms of nationalism, chauvinism and militarism.

The policy of capitalism is death. The policy of the working class is life. That is why the struggle for the day-to-day conditions in the factories must be fused with a political struggle to put an end to capitalism, break the grip of the corporate and financial oligarchs, and create a socialist society based on the satisfaction of human needs, not corporate profit.