The Supreme Court has blocked the Trump administration's plan to put an “immediate end” to the “Deferred Action for Childhood Arrivals” (DACA) program. A 5-4 majority led by Chief Justice John Roberts cited the administration’s failure to provide a “reasoned explanation” for the termination as the basis for its judgment.

This is a second major setback for the Trump administration on the legal front this week, following Monday’s ruling which held that an existing landmark Civil Rights law protects gay and transgender people against workplace discrimination. 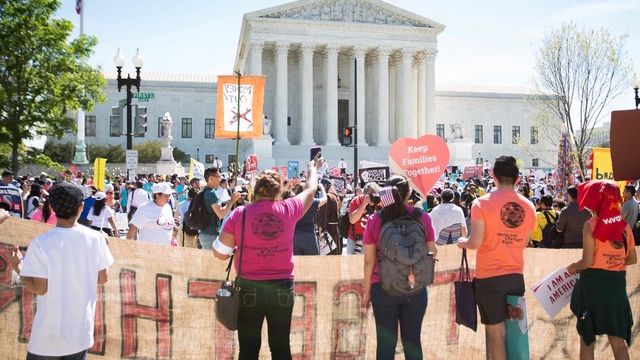 Groups gathered from all across the U.S. to demonstrate support for DACA. (Flickr/Bread for the World)

The program allowed eligible youth to apply for a temporary status that protected them from deportation and provided them with work permits. What this meant was that those eligible for the program could, depending on the states in which they lived, qualify for drivers’ licenses, in-state tuition, state-funded educational grants and loans, and state-subsidized health insurance. DACA status, once obtained, was not permanent and had to be renewed every two years.

A politically motivated gesture by Obama during the lead-up to the 2012 election, DACA was carefully calibrated to put a gloss on an abysmal anti-immigrant record that was already earning the Democratic president the title of “deporter-in-chief.” It targeted a section of immigrants who enjoyed wide public sympathy, since those who were brought to the country “illegally” as children had clearly not broken the law. And it made only limited concessions, with no pathway to citizenship. Despite these limitations and the stringent requirements, the program attracted over 700,000 youth, who registered with the federal government and were therefore at the mercy of the future good will of the capitalist state.

Trump, whose administration carried out a series of vicious anti-immigrant measures, had initially been equivocal about his stance on DACA. In 2017, claiming to support the program and wanting to preserve it, Trump tweeted: “Does anybody really want to throw out good, educated and accomplished young people who have jobs, some serving in the military?”

This changed within a very short period, however. In September 2017, after what has been widely reported to be a contentious debate within the administration, in which the fascistic Stephen Miller and then-Attorney General Jeff Sessions prevailed, Trump announced that he was terminating DACA. In his formal statement, he declared: “I do not favor punishing children …[but] the program is unlawful and unconstitutional and cannot be successfully defended in court.” More informally, Trump defended his position in language that has become quite familiar. In a tweet last year, he declared: “Many of the people in DACA, no longer very young, are far from ‘angels’... Some are very tough, hardened criminals.”

The attempt to terminate DACA immediately provoked widespread national protests, as well as legal challenges that wound their way to the Supreme Court. Immigrant rights groups, as well as the initial lawsuit filed by the attorneys general of 15 states and the District of Columbia, argued that the Trump administration’s decision reflected “racial animus” towards a group that was more than 80 percent of Mexican origin. By that time, Trump was already on record disparaging Mexicans as “rapists, criminals, thugs and ‘bad hombres.’”

The Supreme Court’s ruling, however, does not engage with either the motivations behind the ending of DACA or the substance of the policy. Instead, it narrowly focuses on a procedural point raised by the plaintiffs, that the Trump administration had violated federal procedures in promulgating the executive order rescinding DACA.

Chief Justice Roberts reiterated this in his majority opinion: “We do not decide whether DACA or its rescission are sound policies … We address only whether the agency complied with the procedural requirement that it provide a reasoned explanation for its action.” The five justices, he stated in his ruling, found that the justifications given by the administration were insufficient, and therefore did not constitute sufficient grounds for terminating the program. However, nothing in the ruling prevents the administration from trying again to shut down the program with “adequate reasons.”

In his dissenting opinion, Clarence Thomas, joined by Samuel Alito and Neil Gorsuch, declared: “Today’s decision must be recognized for what it is: an effort to avoid a politically controversial but legally correct decision … [this ruling] has given the green light for future political battles to be fought in this court rather than where they rightfully belong—the political branches.”

In typical form, Trump responded to the ruling with a series of tweets that managed to both personalize the decision, while using violent rhetoric to incite his base: “Do you get the feeling that the Supreme Court doesn’t like me?... These horrible & politically charged decisions coming out of the Supreme Court are shotgun blasts into the face of people that are proud to call themselves Republicans or Conservatives. We need more Justices or we will lose our 2nd. Amendment & everything else. Vote Trump 2020!”

The claim that political considerations swayed the Supreme Court’s ruling is undoubtedly correct. It is worth noting that these considerations in fact reflect the ratcheting up of factional strife within the ruling class, particularly in the face of intensified protests around the country. In late November 2019, when the court held oral arguments on the DACA case, comments made by the justices were interpreted to mean that the administration’s action would be upheld by a 5-4 majority. Roberts, who shapes the court’s rulings as both chief justice and swing vote, seems to have switched sides in view of the changed political climate.

The growing unrest amongst masses of workers and youth, fueled by the coronavirus death toll and the accompanying economic depression, and triggered into open protest by stark instances of police brutality, has hardly gone unnoticed by the ruling elite. As in the LGBT decision issued Monday, it is likely that Roberts, as a class-conscious representative of the financial aristocracy, is concerned about pouring more gasoline on the fire by backing Trump’s unpopular and bigoted attacks on gays and lesbians and undocumented youth.

In both the LGBT and DACA cases, Roberts, as chief justice, assigned the writing of the main opinion to the most right-wing justice available—Gorsuch for the LGBT ruling, himself for DACA. Far from using these cases as an opportunity to expand the struggle for democratic rights, the majority opinions are framed in such a way as to block the most reactionary aspects of the Trump administration’s policies in the narrowest possible fashion.