The border clash between India and China on June 15, which left dozens of Chinese and Indian military personnel dead, has significantly heightened international tensions. While the US has aggressively intervened on the side of India, Russia sees the clash as a major challenge to its geo-strategy and has been heavily involved in trying negotiate a resolution to the conflict.

Just two days after the clash occurred, on June 17, the Indian ambassador to Russia, D. Bala Venkatesh Varma, spoke on the phone with Russia’s deputy foreign minister, Igor Morgulov, about the border dispute. Last Wednesday, Russian President Vladimir Putin’s spokesman, Dmitry Peskov, stated that “we are watching with great attention what is happening on the Chinese-Indian border” and called the developments there “very alarming.” 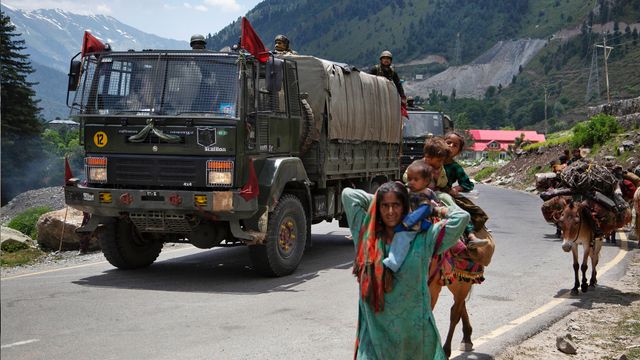 Russia is hosting a meeting today with the Chinese and Indian foreign ministers in Moscow as part of the Russia-India-China trilateral grouping (RIC). According to media reports, the sides have agreed not to discuss the border dispute and instead focus solely on the COVID-19 pandemic. On Wednesday, the Indian defense minister Rajnath Singh  will be participating in a “victory day parade” to celebrate the end of World War II in Moscow. The parade, originally planned for May 9, had been delayed because of the coronavirus pandemic. It is being held now under conditions where the Russian economy has been fully reopened despite a spike in cases.

The conflict between India and China is posing a fundamental challenge to Russia’s foreign policy in Asia and, more broadly, on the world stage. Russia has historically maintained close ties to India. Even though bilateral trade is relatively low, Russia is India’s largest supplier of weapons and both countries have a series of joint military production agreements. Moreover, Russia plays an important role in India’s civilian nuclear program

However, encircled by US imperialism and the European imperialist powers, over the past decade Russia has also been pushed into an increasingly close alliance with China, which has been engulfed in long-standing conflicts with India. Moscow and Beijing have developed a closer military collaboration, and Russia has pushed for several major economic projects, most notably the Power of Siberia pipeline.

While energy cooperation, in particular, has fallen far short of Russia’s expectations—the Russian economy is heavily dependent on oil and gas exports, and China has been unwilling to pay the prices asked by Moscow—it has become a central component of Moscow’s economic and geopolitical strategy.

By contrast, India, especially under Prime Minister Narendra Modi, has been fully integrated into the war drive by US imperialism against China. India has undertaken major military purchases from the US, including very advanced military technology that the US only sells to its closest allies, and the countries undertake a large number of joint military exercises. Under Modi, New Delhi has also made its military bases available to US warships and warplanes.

Under conditions of growing isolation on the world stage, Russia has sought to maintain good relations with both India and China. Moscow has pushed for several organizations that include all three powers, including the Shanghai Cooperation Organization, an economic and security alliance, and the RIC. Russia has tried to use India, in particular, to counterbalance China’s growing influence in Central Asia, where Russia’s economic interests in countries of the former Soviet Union often clash with those of Beijing. More generally, Russia is also concerned about becoming too dependent on China on both a political and economic level.

At the same time, the Indian government has refrained from joining the anti-Russia campaign of US and European imperialism, which has escalated in recent years over the Ukraine conflict and the Syrian war. Moreover, despite vocal objections from Washington, India has purchased Russia’s S-400 defense system. The finalization of the purchase will also be a subject of discussion during India’s defense minister Rajnath Singh’s visit to Moscow this week.

In May, at the 2020 Valdai Club meeting, an annual gathering of leading Russian foreign policy pundits and officials, Fyodor Lukyanov, Russia’s leading foreign policy analyst, insisted: “We should by all means stay away from the flywheel of the US-Chinese confrontation, which is gaining momentum. One of the tasks of Russia’s foreign policy in the foreseeable future will be to accurately build a system of counterbalances that would on the one hand prevent us from being involved in this confrontation, and, on the other hand, enable us to use the fact that there are some other countries that have absolutely no intention to participate in it. There is a common task of positioning oneself in the new world in a new way. I think that India and Russia can play the role of flagships.”

Vasily Kashin, senior research fellow at the Russian Academy of Sciences’ Institute of the Far East, was quoted by TASS as saying: “What makes the role of Russia and India so special is that the outcome of the US-Chinese standoff will depend on them.” He added that Russia’s position “implies certain opportunities, but it is rather risky at the same time.”

A Russian diplomat told the Hindu that Moscow had “high stakes” at a global level in the conflict, adding that “Good relations between India and China are central to the rise of Eurasia and the emergence of a multipolar world order, which is not dominated by a single pole.”

This strategy is now threatened by the growing tensions between India and China, which are fueled, above all, by the US war drive against China. At the same time, notwithstanding the infighting within the American ruling class over foreign policy and the Kremlin’s repeated attempts to find a negotiated settlement with American imperialism, Washington has only further ratcheted up its encirclement of Russia, most recently by enhancing the NATO status of Ukraine.

The campaign against China has been escalated at even greater speed and intensity. In a recent piece in Foreign Affairs that reflects the intense discussions in Washington about war preparations against China, Michele A. Flournoy, the former undersecretary of defense for policy, noted that the risk of a war between the US and China, which would inevitably draw in India and enflame the entire Asian continent, “is higher than it has been for decades, and it is growing.”

Flournoy argued that the most significant obstacle to averting “war in Asia” was the allegedly low “deterrence” by the US against China, and complained that Washington had “not delivered on its promised ‘pivot’ to Asia,” which had been initiated by Obama.

Flournoy proposed a series of measures to dramatically heighten the US military buildup and prepare for warfare “in all domains—air, sea, undersea, space, cyberspace.” She wrote, “To reestablish credible deterrence of China, the United States must be able to prevent the success of any act of military aggression by Beijing, either by denying the PLA’s [People’s Liberation Army] ability to achieve its aims or by imposing costs so great that Chinese leaders ultimately decide that the act is not in their interest. And [Chinese President] Xi and his advisers must believe that the United States has not just the capability but also the resolve to carry through on any deterrent threat it makes.”