Antigone is a film loosely based on the tragedy of the same title by Greek playwright Sophocles (495–406 B.C.) and inspired by the August 2008 shooting of a young Honduran immigrant, Fredy Villanueva, by a Montreal police officer and the subsequent attempt by Quebec authorities to extradite his older brother.

This is the fourth feature-length fiction film by Canadian director and screenwriter Sophie Deraspe ( Vital Signs, The Amina Profile ). Antigone had its world premiere at the Toronto International Film Festival in September 2019, where it won the Best Canadian Film award. The work has not been screened in major movie theaters, but is now available on the distributor’s website Maison 4:3. At the end of May, Deraspe’s film received five awards (along with nominations in two other categories) at the 8th Canadian Screen Awards (announced in a livestream), including Best Picture. Antigone opens with a still shot of an androgynous teenage girl, sitting alone in front of a greyish-white wall. A voice, presumably that of a policewoman, suggests she call her parents. The young girl, named Antigone, answers: “They’re dead, my parents.” Later, it will turn out they were among the more than 200,000 victims of the civil war that devastated Algeria between 1991 and 2002.

Through flashbacks, we learn that after the murder of her parents, Antigone had to leave her native Kabylia accompanied by her grandmother Ménécée Hipponome (Rachida Oussaada), her sister Ismène (Nour Belkhiria) and her two brothers, Polynice (Rawad El-Zein) and Étéocle (Hakim Brahimi), to move to a poor neighborhood north of Montreal when she was only three years old. 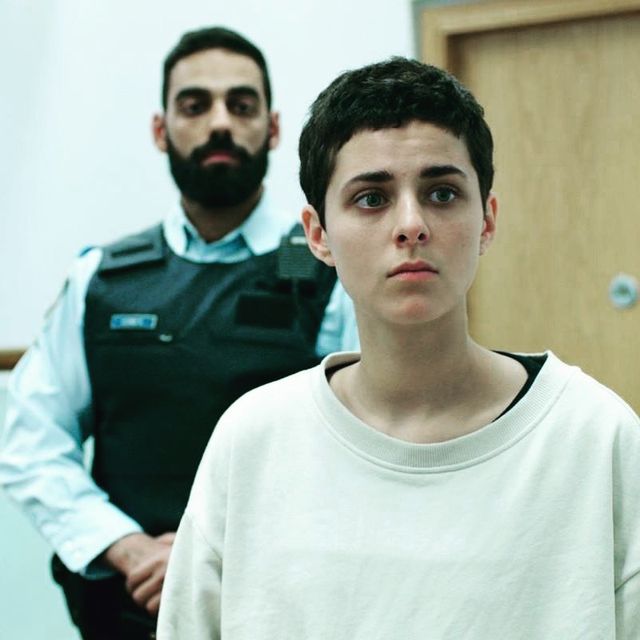 The children managed to adapt to this new life and, with their grandmother, enjoy happy moments. Antigone is a reserved and intelligent young girl, loved by her two brothers, who commit the occasional petty theft. At school, Antigone meets Hémon (Antoine Desrochers), the son of a prominent politician, with whom she discovers the simple joys of life and love.

The fragile stability of this everyday life is suddenly shattered when Étéocle is shot by a policeman during a brutal intervention. After identifying the body of their beloved brother in an austere morgue, the two sisters, in tears and mourning, learn from the implacable authorities that Polynice will be placed in detention for “breaking conditions and assaulting a police officer.” Since he still does not have Canadian citizenship, Polynice faces deportation from the country.

Convinced of her brother’s innocence and determined to do everything possible to help him escape from prison and avoid extradition, Antigone puts her own freedom at risk. In her quest, which is initially driven by a certain naïveté, Antigone is confronted by powerful state forces, including a ruthless judicial and prison system, but also the big business media that feeds anti-immigrant sentiment.

In Antigone, Deraspe addresses in an honest, albeit limited way, burning social issues not only in Canada, but around the world—the oppression of immigrants, police violence, mounting youth revolt and, to some extent, social inequality. This is especially relevant in light of the recent eruption of mass protests throughout the US and internationally denouncing the police murder of George Floyd in Minneapolis. The organizers of a demonstration in Montreal pointed out that several people in Canada have been victims of police violence in recent years, including Villanueva.

Deraspe is interested in individuals from the most oppressed strata of society, without falling into stereotypes. The film is in itself a challenge to the anti-immigrant chauvinism of the ruling elite, embodied by François Legault’s hard-right Coalition Avenir Québec (CAQ, Coalition for Quebec’s Future) government, which seeks to blame ethnic minorities for all economic and social problems. 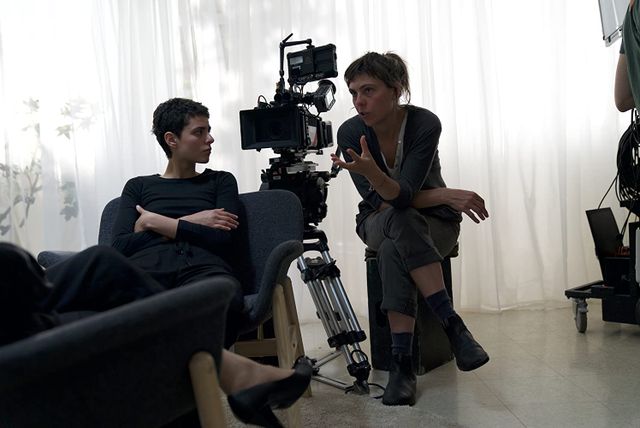 The filming of Antigone

Significantly as well, the film is not saturated with identity politics, which falsely attributes the oppression of minorities to inherent racism among whites and portrays Quebec society as being divided between privileged “native-born Quebecers,” on the one hand, and immigrants, on the other. Both at school and at the Youth Centre, where Antigone is eventually sent, the characters in the film naturally mix together, regardless of their ethnicity. The young people who defend Antigone are of all nationalities. Hémon, who is white and in love with the heroine, is doing better than Antigone, but chiefly because his father is wealthy and influential.

Intriguingly, in an attempt to appease the anger of the girls at the Youth Centre and undermine their support for Antigone, management at one point hires a counselor wearing the hijab. One young woman exclaims, “Hold on, they want to look open to diversity!”

Several scenes in the film are moving. For example, the scene of Étéocle’s murder, filmed in slow motion, has the ring of genuine truth. The use of actual video of the riots that broke out in the multi-ethnic, working-class neighborhood of Montreal North following Villanueva’s murder reveals the wave of anger that results from Étéocle’s death. Also worthy of mention is the scene where Ismène realizes she will probably never be able to lead the simple life she so dearly cherishes, as well as Ménécée’s sadness at the oppression of her grandchildren. The performers, both the professionals and the many non-professionals, are serious and talented.

In Antigone, young people are portrayed as intelligent and defiant toward the authorities. Social media is rightly seen as a means of organizing resistance, and the judicial and prison systems portrayed as instruments of state oppression.

Although in her feature film debut, Nahéma Ricci brings a beautiful authenticity to the main character. Her acting remains simple and without exaggeration, but is not always entirely convincing. Her composure, almost stoical at times, can seem at odds with her radical positions against the powers-that-be. This is related to the film’s social weaknesses, the main one being that it does not address the class issues.

Police brutality in the US and throughout the world expresses the overall violence of the capitalist state and the ruling elite, and the fundamental harshness of the social relationships. The authorities respond to their insoluble crisis and growing social inequality with repression and anti-democratic measures. The police, as well as the courts, the media and the entire parliamentary system are instruments of class oppression.

Over the last five years in the US, the most unequal advanced country in the world, the police have killed more than 1,000 people annually. The same trends are at work around the globe, including in Canada. While the exact number of police-induced deaths will never be known due to the lack of an official national count, a CBC research revealed that from 2000 to 2017, 461 people lost their lives at the hands of Canadian law enforcement. The number has increased over the past three years. 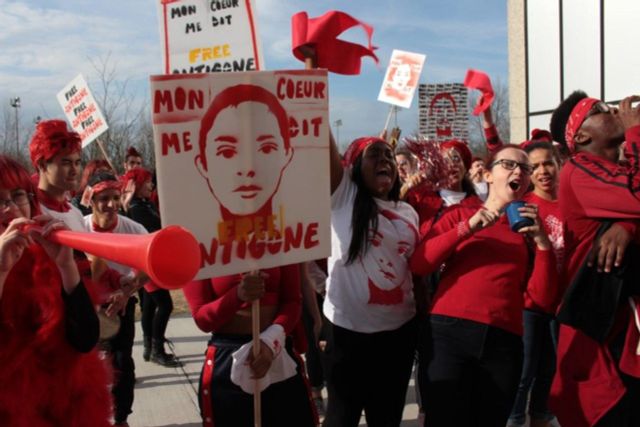 Victims of police violence belong mainly to the most exploited sections of the working class, including immigrants and people living in chronic poverty, as well as people with mental illness. In both Canada and the US, whites make up the majority of victims, although minorities, especially blacks, and, in Canada, aboriginals, are vastly over-represented.

However, the current outburst of anger is not just about the murder of Floyd, or racism. More fundamentally, struggles are emerging objectively against a decaying profit system that brings to workers and young people only social inequality, poverty, mass unemployment and endless imperialist wars. The desperate situation of the working class has been intensified by the COVID-19 pandemic.

Deraspe’s work only touches on, and in some cases completely ignores, these bigger issues. Antigone’s struggle is essentially an individual one. It is motivated solely by a passionate and almost unreasonable love for her brother and her family.

Antigone obviously has every reason in the world to want to protect her brother who is threatened with extradition, but why does her fight gain such strong popular support? It is hard to believe that what is driving the wave of support for Antigone is simply the “My heart tells me” slogan she uses to explain her cause. As with Floyd’s death, the killing of Étéocle at the hands of the police becomes a rallying point for the masses against a profoundly unjust social system. But the film lacks clarity on this essential connection.

It is also astonishing that there is no real criticism of the violent and gratuitous police murder of Étéocle. There is, no doubt unconsciously, a tendency to accommodate to the official ruling elite and media version of events in the “Villanueva case.” These forces have always maintained, in contradiction to numerous eyewitness accounts validated in court, that police officer Jean-Loup Lapointe acted in self-defense. The media, which plays a key role in the agitation against immigrants to divide the working class, has been waging a relentless campaign in favor of Villanueva’s extradition. Lapointe, cleared by the courts and the media, has never been charged and is still on patrol in the streets of Montreal.

The recent mass protests in the US and internationally had not yet erupted during the writing and filming of Antigone, but the underlying processes had long been underway. They are now bursting to the surface and will have a profound impact on cultural and artistic life. Honest creators such as Deraspe, it is to be hoped, will take an even more critical look at society, bringing their talents and art to bear to further expose the truth.