US: Bath shipyard workers strike over subcontracting and job cuts

As the Trump administration and the US Pentagon are ratcheting up preparations for great power conflict with China, Russia and other overseas rivals, more than 4,300 workers at the Bath Iron Works in Maine, a contractor for the US Navy, have walked out on strike.

The shipyard workers launched the strike Monday after voting by 87 percent to reject a contract proposal by the company, an arm of General Dynamics. The last walkout at the facility took place in 2000 and lasted 55 days. The striking workers are members of International Association of Machinists Local S6, the largest union at the shipyard, which is located 40 miles south of the state capital of Augusta.

Management is offering a minimal 3 percent annual pay raise but wants significant changes to work rules that it claims are needed in order to boost production. The company wants to bring in more subcontractors and eviscerate work rules to allow it to shift workers from job to job as needed. The company is continuing operations with management and other non-striking personnel during the strike. Workers are outraged that under the terms of the proposed contract management can bring in subcontractors even though permanent employees are on layoff.

The company is about six months behind schedule on the building of six Arleigh Burke-class destroyers, and the last of three Zumwalt destroyers. The Burke destroyers host the advanced Aegis combat system for air and missile defense. The backlog on production is despite the fact that Bath Iron Works continued operations throughout the pandemic.

On March 24, over 50 percent of the Bath shipyard workers stayed home to demand the suspension of operations after an employee tested positive for COVID-19. The action was carried out by workers independently of the IAM and other unions. The shipyard soon reopened, bolstered by a declaration from the Trump administration that the building of destroyers was “critical infrastructure.” However, 25-30 percent of shipyard workers continued to stay home over COVID-19 concerns until management issued a back to work ultimatum in early May that met no serious opposition from the IAM.

The IAM had agreed to concessions in the previous contract in 2015 claiming they were needed to help management obtain a contract from the US Coast Guard. The deal substituted bonuses for annual pay raises and raised workers’ pension and health care contributions.

The Bath Iron Works lost the Coast Guard contract, but of course the concessions were never repaid. Workers appear determined not to accept more cuts. Furthering their determination is the fact that defense contractors such as General Dynamics were the beneficiaries of billions in COVID-19 bailout money courtesy of the US Congress.

The US Navy is insisting on the contract changes to speed up production. In a letter to local Maine congressmen about the state of the negotiations, Bath Iron Works President Dirk Lesko said, “This (the need for more subcontracting) was a point communicated to both of you directly by Rear Adm. William Galinis”—at the time the program executive officer for ships and who is now the head of the Naval Sea Systems Command—who “noted that the other shipyards with which the Navy does business, our competitors, regularly use subcontractors to address shortfalls in skilled labor or to overcome schedule challenges.”

One angry worker posted on Facebook “Yes. It's a junk contract and WE will lose so much. THEY once called us essential but now are treating us like garbage and trying to bust the union. The management is the ... issue here.!!! They blame it all on us, but can’t manage the place!! STRIKE!!!!!Help”

The Bath Iron Works is one of the largest employers in Maine, with 6,800 workers. It hired 1,800 workers last year, mostly in lower-paid categories. The company plans to add another 1,000 this year, along with more subcontractors. 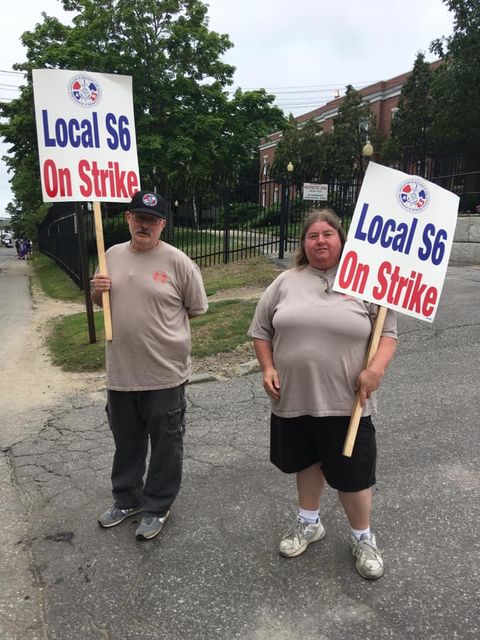 Management has insisted that cost reductions are needed in order to compete with lower-cost operations along the US Gulf Coast. General Dynamic is massively profitable, reporting full year 2019 earnings of $3.5 billion on revenue of $39.4 billion.

The Trump administration is watching the strike closely. Navy spokesman Captain Danny Hernandez said in an emailed statement Sunday that “the work performed by our industry partners is critical to our Fleet. To avoid disruptions, the Navy is hopeful leaders at General Dynamics’ Bath Iron Works and the International Association of Machinists and Aerospace Workers come to agreement on the current contract negotiations soon.”

In mid-April, the Trump administration issued an executive order forcing meatpacking plants to stay open, despite rampaging COVID-19 infections at many facilities. In issuing this order Trump cited the Cold War-era Defense Production Act that gives broad power to the president over “critical” industries.

At the same time, the White House exerted immense pressure on the Mexican government to restart production at plants that manufacture components for the US defense industry, which had been shut down due to the spread of deadly disease and worker protests.

In an ominous sign of impending military conflict, the Navy said it was taking the unprecedented step of calling up 1,600 reservists to fill labor shortages at shipyards repairing aircraft carrier and submarines to get them back to sea quickly.

For its part, the IAM is doing everything it can to limit the effectiveness of the strike and isolate the workers from other sections of the working class. In a long list of picket line rules issued to strikers, the union demanded that workers take no actions that might impede strikebreakers in any way, including the self-limiting of the number of workers on the pickets.

Among other reactionary directives, the IAM states, “Hold no conversations with any truck drivers or other persons who attempt to make deliveries to projects or remove material from projects.” And “Do not, in any way, encourage or induce people to leave the project or to quit work on the project.” Further, the union bans workers from bringing recording devices to the picket lines, leaving them unable to document possible provocations by scabs, management or police. In light of the nationwide epidemic of police violence this last directive is of particular significance.

Several Maine Democratic politicians have offered platonic support to the strikers. However, Maine Democratic Governor Jane Mills has refused to comment on the issues in the strike except to urge a resumption of negotiations, while adding the walkout impaired the “ability of BIW workers to deliver much-needed ships to our Navy.” Democratic presidential candidate Joe Biden has also been conspicuously silent, as have other prominent Democrats.

The fight by Bath shipyard workers over key contract issues merges with the fight of the whole working class against the murderous policies of the ruling class of a forced return to work even as the COVID-19 pandemic surges. No confidence whatsoever should be placed in the unions, either to protect workers on the job or to wage a serious fight for contract demands.

The World Socialist Web Site and Socialist Equality Party urge strikers to build an independent rank-and-file strike committee to conduct their struggle. This committee should expand the fight of Bath workers to all sections of the working class, teachers, UPS workers, truck drivers, health care workers and food processing workers in the US and beyond. The strike should serve as a catalyst for a broader struggle in defense of workers’ right to jobs, decent incomes and safe, healthy working conditions. This must be combined with the fight for the international unity of the working class against war and for the conversion of war-making industries into production for human needs.