As the first wave of the pandemic in the United States continues unabated, yesterday the US posted 38,386 new COVID-19 infections, according to Worldometer coronavirus tracker, just short of the high set on April 24 when the same index reported 39,072 cases. Even this horrific figure was exceeded by Brazil, which had a staggering 40,995 new cases reported on June 24.

Nearly two-thirds of the new US cases, more than 23,000, came in seven states across the south and southwest: North Carolina, South Carolina, Georgia, Florida, Texas, Arizona and California. The US epicenter of the disease, previously in the New York City area, as well as urban areas across the north, from Boston to Philadelphia, Detroit and Chicago, has now shifted to the Sunbelt. 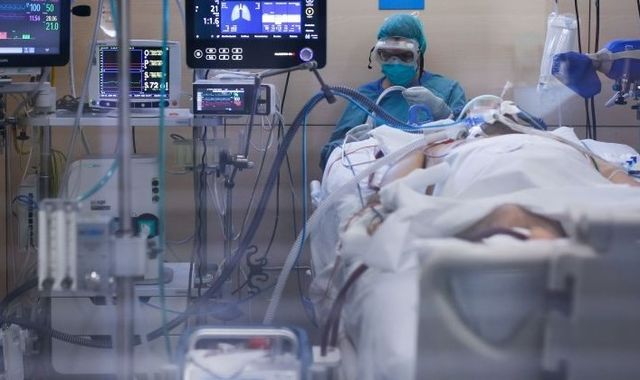 Texas had 4,092 patients whose COVID-19 cases were so serious they required hospitalization, the largest figure for any state, and Houston, the largest city in Texas, is in danger of a New York-style overflow of its hospital system.

In approximately three weeks, 500,000 more Americans have fallen victim to the coronavirus, and by all accounts, the curve of cumulative cases has begun to accelerate. There are now more than 2.45 million cases and close to 125,000 deaths in the US, according to Worldometer. During these three weeks, the pandemic has been expanding in both scale and scope. Thirty-three states are now reporting rising seven-day averages, up from nine states seeing such increases on June 9.

According to the Trump White House, the current increase in COVID-19 cases is not a real public health emergency, but an artifact of increased testing. The disease is not really spreading, it is just that greatly increased testing is finding disease that was already there. This argument has culminated in Trump’s monumentally stupid claim that if testing were reduced, there would be fewer cases of the disease.

This argument not only fails the test of logic, it falsifies the actual course of testing, with the daily rate for the US remaining at a totally inadequate 400,000 to 500,000. Yet, since mid-June, the rate of positive tests has been climbing, currently reaching a figure of 5.5 percent for the country as a whole. This suggests that community transmission is increasing, particularly in those states that have been the most aggressive in reopening businesses and encouraging the resumption of social gatherings where the virus can easily spread.

Using data obtained through the COVID-19 tracking project website, the Wall Street Journal found alarming figures for the worst-affected states for the week ending June 23. For Arizona, 22.1 percent of tests for COVID-19 returned a positive result—nearly one in every four tests. South Carolina is at 15.9 percent, Florida at 13 percent, Utah at 12.7 percent, Mississippi at 11.9 percent and Texas at 10.9 percent.

By contrast, countries that have effectively suppressed or contained the infection have tested so widely that the figure for positive tests is below one percent—100 tests performed for every case detected.

According to the University of Minnesota’s COVID-19 hospitalization tracker, as of June 24 over 25,000 people are in hospitals throughout the country undergoing treatment for coronavirus infection. Texas and California have the highest number of hospitalizations with 4,092 and 3,868 patients, respectively. The tracker indicates that there are 1,225 patients in ICUs. Arizona has 2,136 patients hospitalized, of whom 614 are in ICUs and 386 on mechanical ventilators. The state public health department reported that the ICU utilization in the state is at 88 percent, with only 200 ICU beds available throughout the state.

Obtaining testing in Arizona has quickly become more difficult with longer wait times in the punishing heat. There are growing delays in test results and growing shortages in the supply of testing materials such as reagents and nasal swabs. The number of cases is growing faster than testing capacity. Health officials are also lamenting the need for more trained personnel at hospitals to treat patients. All of the very same issues that had erupted in April in New York and New Jersey have returned to plague Arizona.

Will Humble, executive director of the Arizona Public Health Association, said that in the reopening of the state, no guidance was given beyond issuing a perfunctory statement to maintain voluntary vigilance in public spaces, which only led to normalizing pre-pandemic behavior. An infectious disease epidemiologist at the University of Arizona, Kacey Ernst, said, “Many people equate reopening with being safe. While there certainly is some uptake of masks and physical distancing, it is not ubiquitous … we are not yet in the place where we have a well-developed capacity to test and do contact tracing for all our cases.”

California smashed its daily record with more than 6,000 infections reported on June 22. Dr. Barbara Ferrer, Los Angeles County’s Public Health Director, said that the spike in cases correlates with the mass protests that broke out in the wake of the murder of George Floyd by a Minneapolis police officer. However, other clusters are a direct contribution from recent social gatherings and parties. Los Angeles County’s positivity rate has climbed from 5.8 percent of those tested just two weeks ago to 8.4 percent.

Florida continued to see cases rise with 3,286 COVID-19 infections on June 23. The state has surpassed 100,000 total cases of COVID-19. Along with the rise in cases, metrics followed by Miami-Dade County public health demonstrate that since the beginning of June, the number of ICU patients and those on mechanical ventilation has started to climb.

Since the United States lifted its restrictions and lockdowns in the latter part of May, officials across several states have noted that many of the new cases of COVID-19 are among young people who are more resilient to the infection.

Health officials fear that this may lead to the transmission back into the more vulnerable communities. Dr. Tom Frieden, a former director of the Centers for Disease Control and Prevention, tweeted, “with younger age of recent infections in at least some places such as Florida, expect a lower death rate in this wave … until 20 to 40-year-olds who are infected today go on to infect others.”

Dr. Mike Ryan, speaking at a press briefing by the World Health Organization, was asked about predicting peaks of outbreaks. He replied, “It’s very difficult to predict peaks. The peak has an awful lot to do with what you do. What you do affects the peak. It affects the height of the peak, the length of the peak, and the trajectory downwards. That has everything to do with the government's intervention to respond, the community’s cooperation with that intervention and the health care and the public health care systems' capacity to act. The virus does not act alone. The virus exploits weak surveillance; the virus exploits weak health systems; the virus exploits poor governance; the virus exploits a lack of education and a lack of empowerment of communities … the numbers respond to the response. There are no spells here. You can’t divine this away.” Though he didn’t mention any country by name, undeniably, Dr. Ryan clearly had the United States in mind.

Dr. Anthony Fauci, in his House Energy and Commerce Committee testimony on Tuesday, explained that the “virus was not going to disappear” and that the next two weeks would be critical because death lags cases. In plain English, that means the sharp rise in new cases will be followed, about two to three weeks later, by a sharp rise in deaths.

“I’ve been dealing with viral outbreaks for the last 40 years. I’ve never seen a single virus—that is, one pathogen—have a range where 20 to 40 percent of the people have no symptoms,” explained Dr. Fauci at the hearing. He went on to add that asymptomatic patients have viral loads not significantly different than in symptomatic patients, making them equally contagious. He urged the continued measures of social distancing and universal usage of facemasks to protect community transmission. Moreover, asymptomatic patients can still suffer significant damage to their health. When medically evaluated by imaging techniques like CT scans or x-rays, more than half showed signs of inflammation in the lungs.