Surging COVID-19 cases and the abandonment of any official measures to contain the virus have triggered a new wave of struggles by workers, with autoworkers in Detroit launching work stoppages in recent days to demand measures be taken to protect their lives.

The pandemic has spun out of control. The US recorded its highest and second-highest numbers of new cases Friday and Saturday, with over 90,000 testing positive in the course of 48 hours. Deaths in the US now exceed 125,000 and at the current pace are set to surpass 200,000 by the end of July. Globally, total cases raced past 10 million and deaths topped 500,000 over the weekend, with no end to the acceleration of the disease in sight.

Following the premature and homicidal return to work forced through last month by the Trump administration and Democratic state governors, the coronavirus has expanded its grip silently and rapidly throughout factories, warehouses and other workplaces. Company management and union officials alike are deliberately withholding information on new cases from workers, fueling explosive anger and opposition. 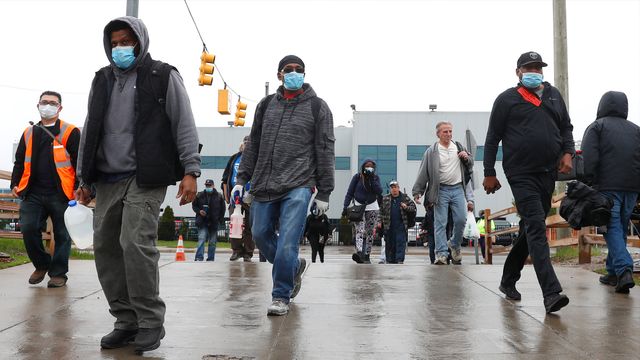 On Thursday, workers at the Fiat Chrysler (FCA) Jefferson North Assembly Plant in Detroit stopped production after hearing reports of new cases of COVID-19, staying on the line but refusing to handle vehicles. The job action spread throughout all three of the plant’s shifts over the next day and a half, with workers appealing for support on Facebook and Twitter.

On Saturday night, workers at the FCA Sterling Heights Assembly Plant just north of Detroit launched their own work stoppage, after learning that a coworker in materials handling had tested positive for the coronavirus. Workers at the plant had closely followed the reports of the job actions at Jefferson North.

Workers at both Jefferson North and Sterling Heights have initiated independent rank-and-file safety committees in order to assert their interests, faced with the intransigent refusal of company management and the United Auto Workers to provide basic safety measures or information about new cases.

A statement issued by the Jefferson North Rank-and-File Safety Committee Friday night said that workers’ “health must not be jeopardized for corporate profits” and called on “all autoworkers and workers everywhere: If necessary, stop production. We have the right to a safe environment and to not bring home this disease to our loved ones. We are due that.”

The independent actions taken by autoworkers in recent days are the advance guard of an upsurge of class struggle by workers in the US and in other countries.

Nurses in Riverside, California, launched a strike against hospital chain HCA last week to demand adequate protective equipment and staffing, while nurses in Joliet, Illinois, have set a strike deadline of July 4. Some 4,300 shipbuilders at the Bath Iron Works in Maine are entering the second week of their strike today. Protests by diverse sections of workers have emerged over the past week, including Uber and Lyft drivers, Disneyland workers, University of California service workers, and state workers in Nevada.

Workers globally are seeking to fight back against the common problems they face: lack of safety measures against the pandemic, mass unemployment and spiraling social inequality. In the Netherlands, workers at Tata Steel struck Sunday in opposition to planned job cuts. In Nigeria, health care workers in the state of Nasarawa launched a strike after 50 of their colleagues tested positive for COVID-19.

The decision to restart nonessential production and roll back social distancing measures was not made by scientists and medical experts on the basis of public health considerations or the retreat of the virus, but rather by Wall Street and the financial and corporate aristocracy, in the interests of further inflating their wealth.

After using the economic crisis triggered by the pandemic to engineer the transfer of trillions of dollars to the major corporations and banks, the Trump administration and Democratic and Republican officials alike moved to end economic shutdowns and ensure that the flow of profits was renewed.

Although gargantuan sums of money have been sucked up by the ruling elite, the auto companies and other corporations whose revenues have been impacted by the crisis have also taken on massive amounts of debt in order to keep their operations afloat. In the roughly eight weeks of shutdown, the auto industry took on $72 billion in debt. The Federal Reserve has begun buying corporate bonds for the first time, in particular to keep the junk bond market from collapsing.

In order to ensure these debts are paid, production and the process of value extraction from the working class must continue, no matter how many lives are lost, and there must be no return to economic shutdowns—so says the ruling class.

But the class interests of all workers, the defense of their lives and those of their families, are in irreconcilable conflict with these policies. If the pandemic is to be brought under control and thousands and millions of lives saved, it will be done by workers through the means of class struggle.

Autoworkers at Jefferson North and Sterling Heights have taken the first steps. In their statements, the workers’ committees issued demands for elementary safeguards against COVID-19, including:

These basic requirements to ensure the protection of workers and their families are opposed to the profit interests of the corporations, which are ferociously defended by their political representatives in the Democratic and Republican Parties.

As the Socialist Equality Party wrote in its statement Build rank-and-file factory and workplace committees to prevent transmission of the COVID-19 virus and save lives!:

The fight against the pandemic is inseparably linked to a struggle of workers against the ruling class—the corporate and financial oligarchy—and its dictatorship over economic and political life. It is, therefore, a fight against capitalism and for socialism, the restructuring of society on the basis of social need, not private profit.

The struggle by workers to protect their lives is therefore a political one, requiring the development of a political party of the working class opposed to capitalism and based on a socialist program, fighting to establish workers’ democratic control of society.