The primary elections held on Tuesday, June 30, and results of earlier primaries announced the same day, showed the ongoing political polarization in the United States. Both the major capitalist parties, the Democrats and Republicans, are moving to the right, while working people in general are moving to the left.

This is one more indication of the mounting conflict between the corporate-controlled two-party system and the working class, which comprises the vast majority of the population.

The shift to the right among the Republicans was demonstrated in the victory of a fascist supporter of the QAnon internet conspiracy theory, Lauren Boebert, over a sitting congressman in the Republican primary for the Third Congressional District of Colorado. 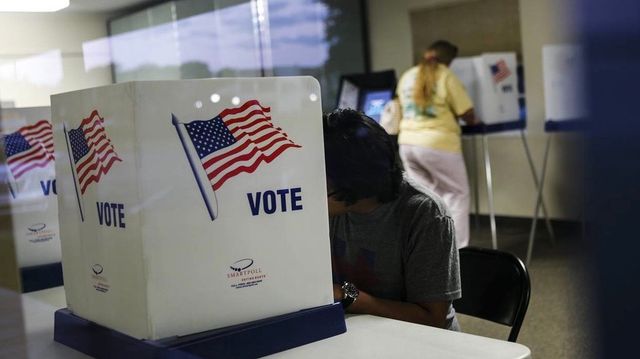 A man voting at a polling place (Credit: Flickr.com)

Representative Scott Tipton has held the seat, which covers the entire half of the state west of the Rocky Mountains, for the past ten years, since he defeated an incumbent Democrat, John Salazar, in the 2010 election, when the right-wing “Tea Party” campaign returned the House of Representatives to Republican control.

Tipton won only a narrow victory in 2018 against a well-financed and thoroughly right-wing Democratic Party opponent, former state representative Diane Mitsch Bush, who won the Democratic primary again on Tuesday. The incumbent Republican evidently was looking ahead to the general election, having accumulated a war chest of $630,000, and spent little on the primary, not airing even a single television ad.

But Boebert, an ultra-right gun rights activist, unexpectedly won 54 percent of the vote in a relatively high turnout for a primary contest. She campaigned against Tipton as a supposed moderate, linking him to four liberal Democrats—Alexandria Ocasio-Cortez, Ilhan Omar, Rashida Tlaib and Ayanna Pressley—because he has voted or co-sponsored coronavirus relief legislation they supported.

Boebert is the second advocate of QAnon to place first in a Republican congressional primary. The first, Marjorie Taylor Greene, faces an August 11 runoff against the second-place finisher in Georgia’s 14th Congressional District. The Republican Party establishment has lined up against Greene, who won 41 percent of the vote in the first-round vote.

If elected, either Boebert or Greene would be the first member of the House of Representatives with close ties to the ultra-right internet tendency.

Boebert owns Shooters Grill in the town of Rifle, Colorado, where the wait-staff serves customers with guns on their hips, and the menu features food described using the names of various types of weapons, both civilian and military.

The restauranteur launched her political career last year by confronting Beto O’Rourke, then a candidate for the Democratic presidential nomination, over his call to confiscate semi-automatic weapons like those used by a fascist gunman to murder nearly two dozen people, mainly Hispanic and immigrant, at a Walmart in El Paso, Texas. Boebert spoke out at a town meeting with O’Rourke held in Aurora, site of a horrific movie theater massacre in 2012 in which 12 people were shot to death.

She also defied state coronavirus restrictions and refused to close the dining area of her restaurant until county officials obtained a letter from a local judge compelling her to do so.

Boebert has indicated sympathy for the QAnon theory, while proclaiming her main causes to be hostility to socialism and support for Trump. She told an internet interview program in April, “Everything I’ve heard of Q—I hope this is real. Because it only means America is getting stronger and better and people are returning to conservative values.”

The QAnon theory claims that Trump is leading a battle against a secret cabal of child sex abusers who control the Democratic Party, and that at some point the president will arrest and even execute his opponents in Washington.

While the Republican leadership has sought to distance itself from the QAnon candidate in Georgia—who may still be defeated in the runoff—there is no such effort in Colorado, where Boebert has won the Republican nomination outright. The National Republican Congressional Committee declared, “This is a Republican seat and will remain a Republican seat,” while Trump tweeted his congratulations.

On the Democratic side, the party establishment asserted its dominance in primary contests for US Senate nominations in Colorado and Kentucky. In both cases, heavily funded and more conservative nominees beat back more liberal challengers.

In the Colorado race, to choose a nominee to face first-term Republican Senator Cory Gardner, former governor John Hickenlooper won the nomination over Andrew Romanoff, former speaker of the state house of representatives, by 60 percent to 40 percent. Hickenlooper has led Gardner in the polls, and the seat is considered essential to the Democratic Party effort to win back control of the Senate, now held by the Republicans with a 53-47 majority.

Both candidates are longtime fixtures in state politics, but Hickenlooper had a higher national profile because of his failed campaign for the Democratic presidential nomination, and vastly more access to big money and endorsements. He was supported by Senate Minority Leader Charles Schumer. Romanoff adopted a more “left” sounding platform, embracing Medicare for all and the “Green New Deal,” but Senator Elizabeth Warren endorsed Hickenlooper, while Bernie Sanders adopted a position of neutrality.

In Kentucky, final vote tabulations from the June 23 primary were released on June 30, after lengthy counting of mail-in ballots that comprised the bulk of the vote. Retired Marine Corps fighter pilot Amy McGrath narrowly defeated state representative Charles Booker for the Democratic nomination to face Senate Majority Leader Mitch McConnell, who is finishing his sixth six-year term. McGrath received 45.4 percent of the vote compared to 42.6 percent for Booker, while a third candidate finished well back.

McGrath is one of the CIA Democrats—candidates coming directly from military-intelligence activities into Democratic Party politics—who lost her race for Congress in 2018, narrowly defeated by Representative Andy Barr for the seat including Lexington, Kentucky. She had the backing of Schumer and the Democratic Party leadership, and has already raised an astonishing $40 million, much of it over the internet. McGrath had to spend half that sum in the primary contest, overwhelming Booker with a 20-1 financial advantage.

Booker trailed badly in the early stages of the race, but as an African American representative from Louisville, he positioned himself at the forefront of the demonstrations that erupted in May and June over the police murders of George Floyd in Minneapolis and Breonna Taylor in Louisville. McGrath was a well-publicized no-show for these demonstrations. Booker also was endorsed by Warren and Sanders, as well as Ocasio-Cortez.

While outright fascists gained in the Republican Party, and the right-wing party establishment maintained control among the Democrats, there was a noticeable shift in Oklahoma, long a byword for right-wing politics in both capitalist parties. In a statewide referendum conducted alongside the primary voting Tuesday, State Question 802 passed by a narrow margin of less than one percentage point.

Four other states expanded Medicaid through ballot questions that amended state law, thus still allowing the state legislature and governor significant leeway in implementing the action. The constitutional amendment in Oklahoma stops the legislature from rolling back the Medicaid expansion. A similar vote is to be held in Missouri August 4.

Oklahoma was one of a total of 14 states, all Republican-dominated, that have refused to expand Medicaid as provided by the 2010 Affordable Care Act, denying health care coverage to millions of lower-income families even though the federal government would pay 90 percent or more of the cost.

An estimated 215,000 state residents would qualify for Medicaid as a result of the statewide vote, according to the Oklahoma Health Care Authority. The state share of this coverage would come to $164 million a year, a bargain at only $800 per person, with the federal government paying the balance.

The measure was placed on the ballot through a petition drive that collected a record 313,700 signatures, conducted before the outbreak of the coronavirus pandemic, which has only underscored the need for universal health care coverage. Oklahoma has one of the highest rates of uninsured, 14.2 percent of the population, second only to neighboring Texas.

The measure had widespread support in the state’s urban areas, including Oklahoma City, the state capital, and Tulsa, where President Trump held an in-person, indoor campaign rally June 20 in defiance of health concerns over the pandemic. The referendum was defeated in the vast majority of rural counties, but not by a wide enough margin to offset the votes in the cities.

The CIA Democrats: A balance sheet of the primaries
[21 September 2018]