“How many of us have to die to build their Jeep Cherokees?”

Detroit FCA workers call on workers at GM, Ford and other companies to set up rank-and-file safety committees

Autoworkers at Fiat Chrysler’s Jefferson North and Sterling Heights plants have urged workers in other auto plants and industries to build rank-and-file safety committees to fight the spread of coronavirus in the factories. Late last month, workers at the two Detroit area assembly plants established safety committees after FCA management and the United Auto Workers refused to release information about COVID-19 cases in their plants or to take any serious measures to protect them from the deadly disease.

“It was apparent that we needed rank-and-file committees because the safety of workers is being disregarded,” said a worker at the Sterling Heights Assembly Plant (SHAP) where workers set up a committee after they halted production over reports that a material handler had tested positive. “We heard that a TPT (temporary part-time worker) was put in the work area believed to be infected, and she was forced to work two hours before management even came to disinfect the area.

“There is no sense of urgency from the company or the UAW. All they care about is keeping the line running and producing the trucks. No workers should be literally risking their lives so the company’s numbers and profits can go up. We have to create our own safety committees opposed to the UAW and FCA, because they are aligned over the bottom line of profit. If they are organized, then we, as workers, have to organize to protect ourselves and our families.” 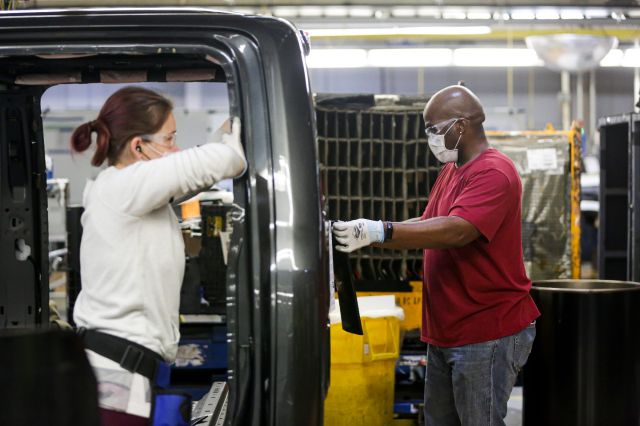 Even though management and the UAW are aware of many cases, including at least 22 at a General Motors assembly plant in Arlington, Texas and another 12 at a GM plant in Wentzville, Missouri, “GM's policy is to not confirm the number of coronavirus cases in its plants,” the Detroit Free Press reported last week. The same is true for FCA and other automakers, with a spokesperson for Toyota’s US automotive operations telling the Wall Street Journal, “Just announcing the number of COVID cases at a given site is not productive.”

The automakers and other large employers have rejected regular testing of employees, the only means to contain the virus. According to an article by Bloomberg News titled “Employers Find Testing Employees More Trouble Than It’s Worth,” only six percent of the 40 large employers they polled are conducting on-site testing. Testing is “not really available, feasible or easy, and it’s not a solution you can do for every employee, every day,” said Lauren Vela, senior director for the Pacific Business Group on Health, which represents large employers like Microsoft Corp. and Walmart Inc.

The UAW has also said that regular testing is not practical. Instead, the UAW, whose top leaders are negotiating with the US Justice Department to avoid a federal takeover because of widespread corruption, including taking bribes from Fiat Chrysler management, has joined the automakers’ efforts to intimidate workers who refuse to work under unsafe conditions. Last week, the UAW issued a joint statement with FCA management suggesting that it was unsafe habits of workers outside the plants that were responsible for any infections.

Nor are workers getting any aid from the federal Occupational Safety and Health Administration (OSHA). OSHA and its state-level equivalents have received more than 20,000 COVID-related complaints from workers this year, but have issued only one citation, according to Bloomberg.

FCA workers at Sterling Heights and the Jefferson North Assembly Plant (JNAP) in Detroit, where a safety committee has also been set up, issued a list of six demands, which they are encouraging workers at other plants to adopt and expand upon.

1. Workers must be immediately notified of any cases of COVID-19 and what areas were affected. This information cannot be kept secret from workers.

2. When a case is confirmed, the factory should be closed for 24 hours for deep cleaning, not just the affected area, but the whole plant. Preventative maintenance is needed to ensure a safe and comfortable working environment.

3. Social distancing must be implemented when entering and leaving the plant and during bathroom, lunch and other break times.

4. The line must be stopped for 10 minutes every hour to enable workers to take off their masks, rest and cool off.

5. Workers must have regular, universal testing. Temperature checks and self-reporting symptoms are not enough.

6. If conditions are not safe, workers have the right to refuse to work without threat of retaliation by management and the union.

“Building rank-and-file safety committees is absolutely necessary,” a Jefferson worker said. “Everyone in the plant stood up and stopped work because management and the union are sweeping everything under the rug. When the plants reopened on May 18, the line started a half-hour after we arrived so we could clean our work areas and shut down a half-hour earlier so they could be cleaned again before the next shift. Now we start 10 minutes later and work flat-out until the end of the shift.

“The cleaning process is almost nonexistent. In their statements to the media, the company and the UAW make it sound like they are going above and beyond to protect us. That’s a lie. It’s business as usual. The union safety committee sides with management. When we protested, they union stewards were nowhere to be found. That’s why we set up our own safety committee.”

Another JNAP worker said, “They can’t wait to get back to full production for their 2021 launch. The plexiglass and shower curtains are not the cure-all. In every local union contract, the workers always said the ventilation in the plant sucks, it’s so smoky it’s like there is a fire in the plant. After every deal with the union, the company promises to repair the fans and the heating and cooling system, but nothing happens.

“Now we have COVID. How are they going to guarantee that the air is okay now? The full cleaning they did in April was it. Now they’re putting everything on the workers. If you catch it, it’s your fault. But we didn’t build this plant.

“If you look at the way the corporations work, someone did a cost benefit analysis when they rushed to reopen the plants. How many lives of the autoworkers it will cost? How many of us have to die to build the Jeep Grand Cherokees? Now, they’re saying ‘If you don’t want to be there, you commit economic suicide because we are going to cut you off of unemployment benefits.’

“But if the workers get together and talk to each other, we can decide to make the adult decisions needed to save lives. They are making monetary decisions. For them, the end, making profits, justifies the means. But we are not ‘human capital stock,’ like one of Trump’s aides said. We are not cattle. Workers care for each other, we are trying to do what is right, but they are trying to repress us. The WSWS Autoworker Newsletter is a wonderful resource to utilize, so people can know what is going on and come together to protect ourselves.”

A worker at FCA Trenton Engine plant, just south of Detroit, added, “They made us think we were going to be safe when we came back into the plant. But they’re not sanitizing or social distancing, and it is frightening. Workers need breaks to remove their masks, but all the company wants is for you to work harder and harder.

“The union is not standing up for us. They are on management’s side. We need a committee of our own to stand up for ourselves. Workers in all the industries are experiencing this. We need a voice of our own.”

A Ford worker at the Dearborn Truck Plant said that because large numbers of workers have called off out of concerns over COVID-19, management claims it does not have enough relief workers to fill in when an individual worker needs to take a bathroom break. “Instead, they are carrying out ‘mass relief,’ with everybody taking the break at the same time. There is no way to social distance that way.

“We have to take control over our own safety,” he said. “We are the ones whose priority is safety. We will not take risks for extra profits. Autoworkers need to link up with workers in other industries in the US and internationally,” he said. “We should just stop production if there is an infection in the plant. We don’t know where that infected worker may have been.

‘When we are in charge of safety, we will say, ‘No work, until the safety committee deems it safe.’”