A continuing spike in coronavirus infections, centred in the Victorian state capital Melbourne, is exposing the criminally-negligent “reopening of the economy” by state and federal governments over the past six weeks and their refusal to even consider any strategy aimed at eliminating COVID-19 transmission.

“We will see an increase in hospitalised and ICU [Intensive Care Unit] cases and in deaths in the coming days because of the spike that we have seen,” Sutton declared.

He revealed that there were almost 5,000 people who had come into contact with affected individuals. The state, Sutton said, does not have a sufficient number of medical professionals to contact all of them, so “where feasible,” they will receive an automated message. 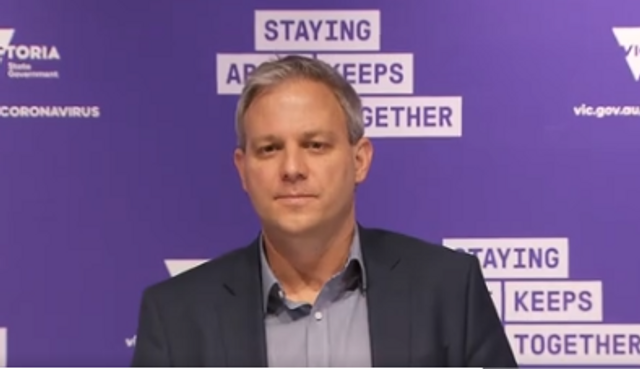 Today’s tally is the fifth straight day of triple-digit infections in Victoria. Active cases across the state stand at 1,172, the largest number since the coronavirus crisis began.

The spike is continuing as a city-wide lockdown, announced earlier in the week, goes into effect. The measure, while placing further restrictions on travel within Melbourne, visits to other people’s homes and outdoor gatherings, will not impede the operations of most businesses, especially the largest companies.

Yesterday’s announcement of 165 Victorian infections revealed widespread community transmission. Some 30 of those infections were related to “known clusters,” while 130 were “under investigation,” meaning that their source is unknown. None of Thursday’s cases were among returned travellers in hotel quarantines.

Unlike in the initial stages of the pandemic, when those affected were wealthier residents returning from overseas holidays in Europe and the US, the current spike is hitting the working class, the poor and the vulnerable the hardest.

More than 100 cases are among residents of nine public housing towers in the inner-city suburbs of Flemington and North Melbourne. When residents were forced into a police imposed “hard lockdown” on Saturday, that figure was below 50.

Victorian Labor Premier Daniel Andrews announced yesterday that the stay-at-home order would be lifted in all but one of the towers, after widespread public anger over the failure to provide tenants with basic essentials, including decent food.

At least 53 infections have been confirmed in the North Melbourne building that will remain under lockdown for another nine days. It remains unclear how many tenants in other buildings have tested positive. Andrews said that more than 100 would be given the offer of quarantining in hotels. Some media reports have stated that in all of the towers, including the North Melbourne building, 159 infections have been detected.

This likely indicates that the bureaucratically-imposed and punitive restrictions have failed to halt rampant transmission within at least some of the towers, or that testing prior to the “hard lockdown” was minimal.

Cases are again emerging in aged care facilities, where most deaths have occurred since the pandemic began. A resident at the Glendale Aged Care facility in Werribee tested positive this week, as have staff members at Uniting AgeWell in Preston, Baptcare Karana in Kew and Doutta Galla Lynch’s Bridge in Kensington.

Workplaces continue to be centres of transmission, underscoring the reckless character of the pro-business drive to force all workers back to their places of employment. At least four workers have tested positive at a Footscray “customer fulfillment centre” operated by supermarket giant Woolworths, following multiple cases at a warehouse operated by its main rival Coles and confirmed infections in two abattoirs.

Some 113 cases have been among students and staff at the Al-Taqwa College in western Melbourne, the largest outbreak in the more than 30 schools forced to close after face-to-face teaching was prematurely resumed in late May.

Despite this, the Andrews government is forcing teachers to return to schools next week for the beginning of Term 3 with a reduced student cohort, and has still not ruled out a complete reopening over the following weeks.

As in the previous wave of infections in March–April, transmission is occurring within the health system itself. Cases have been reported in Royal Melbourne Hospital, the emergency department of Sunshine Hospital and Brunswick Private Hospital, while eleven infections have been confirmed at the worst cluster in Epping’s Northern Hospital. At least four paramedics have tested positive. The total number of infected healthcare workers is almost two dozen.

Around 41 COVID-19 patients have been hospitalised. Twelve of them are in intensive care, up from the seven reported yesterday.

Despite the relatively low numbers at this stage, medical professionals have warned that Melbourne’s hospitals are already in danger of being overwhelmed. Senior doctors who spoke to the Guardian yesterday stated that a “hard stop” to elective surgeries was required to ensure capacity, differing with official instructions that 75 percent of such procedures should be carried out.

One doctor stated: “There is no free, or surge bed capacity, at the moment,” adding that their hospital “only had three beds available for COVID or suspected COVID patients [this week]. That’s scary. The Australian hospital system is always at 100% capacity. There aren’t a lot of spare beds.”

The situation had not improved over the previous six months, she said, with overcrowded waiting rooms threatening broad transmission.

When the pandemic began in March, there were just 2,200 intensive care unit (ICU) hospital beds across the country. From 1977, the number of all hospital beds per 1,000 people had halved from 8.1 to 3.9, bringing Australia’s ratio below countries such as Italy.

In justifying the lifting of coronavirus restrictions beginning in May, governments proclaimed that they had increased hospital capacity to cope with any surge in infections.

An article in the Age on Wednesday called into question those assertions. It revealed that in Victoria alone, an order of 3,000 intensive care monitors in April was “significantly reduced,” plans to “buy hundreds of defibrillators from overseas never proceeded” and a proposal for a “750-bed intensive care facility at the Melbourne Convention and Exhibition Centre was also quietly shelved.”

While each one of those initiatives was announced with great fanfare, their cancellation was not even publicly-revealed prior to Wednesday.

The Australian has claimed that an assessment by the Australian Health Protection Principal Committee found that Victoria did not follow guidelines specifying that “close contacts should be followed up daily for flu-like symptoms, a breakdown that led to surging transmission rates.” It is also alleged that the Victorian health department has an insufficient number of specialists trained in contact-tracing.

Chief health officer Sutton appeared to confirm those claims during the announcement of today’s record infections. In any event, the high proportion of cases of “unknown origin” each day clearly suggests that efforts to trace the spread of the virus are failing.

There are growing fears that the spike will extend across the country, intensified by the announcement of 14 new COVID-19 infections in New South Wales today (NSW). A closure of the border between Victoria and NSW, the country’s two most populous states, began this week.

The lack of any warning of the unprecedented move, which is being enforced by hundreds of police officers, has created a crisis for those living in border towns. Some have been cut off from their places of employment, their close relatives and even their nearest medical facility.

Thousands of people have already been granted exemptions, however, meaning that the dangers of transmission across state boundaries remain high.

Earlier this week, it was revealed that some passengers of a Jetstar flight from Melbourne to Sydney were waived through on arrival, despite medical checks supposedly being mandated. This has been compared to the disastrous handling of mass infections on the Ruby Princess cruise ship, which resulted in hundreds of cases across the country.

The primary concern of the ruling elite is to ensure that the current surge does not impact on their reckless back-to-work drive. Restrictions are continuing to be eased, with Queensland announcing the opening of its state border, except for Victorian residents.

Liberal-National Prime Minister Scott Morrison has backed Victorian Labor Premier Andrews, in line with the bipartisanship that has been on display throughout the crisis. Morrison has reportedly offered to deploy hundreds more army personnel to assist with Melbourne’s lockdown, in the latest warning of the increasingly militarised response to the pandemic.

The calculations in the political and financial establishment were spelled out in back-to-back editorials in the Australian.

This morning, the Murdoch-owned paper insisted that there was “no need for panic or extreme measures that would prolong the economic fallout from COVID-19 unnecessarily.”

It denounced calls for any attempt to eliminate transmission, a strategy already rejected by Morrison and the state leaders, on the grounds that this would “do the nation no favours.” The editorial callously noted that the majority of those who had died of COVID-19 were over 70. Given this, it was necessary for Australians to “learn to live with the virus, as safely as possible,” as they had done with the flu, in order to “protect the economy.”

Yesterday’s editorial also downplayed the crisis, blithely stating: “The infections setback aside, a more positive national policy is possible.” This had been seen with the establishment of a bipartisan “national cabinet,” largely ruling through anti-democratic fiat, and the creation of government-led working groups, bringing together union officials and company executives to plan a sweeping pro-business overhaul of industrial relations and workplace conditions.