Last Saturday, July 11, tens of thousands of workers and youth marched in a demonstration on Cathedral Square in the central district of Port Louis, Mauritius, against the government of Prime Minister Pravind Jugnauth (Militant Socialist Movement/MSM). While the event included workers from many industrial sectors, multiple organizations representing Mauritian maritime workers and their families were present.

In addition to utilizing the coronavirus as a pretext to carry out austerity measures, the Mauritian government has been one of several around the world responsible for the abject failure to repatriate ship workers since March, when governments worldwide restricted their borders in response to the outbreak of the pandemic.

Protesters held signs in French and English, as well as Mauritian French Creole, the two official languages and de facto dialect in the small island nation situated in the western Indian Ocean.

Signs from seafarers’ families bore slogans such as “Return my father,” “Let my husband come home” and “Citizens have the right of return to their homeland.” Others denounced the pro-business policies of the government, displaying messages such as “People before profits,” “Stop taking public money” and “Stop playing with our future.” A Mauritian worker present at the July 11 demonstration told the WSWS that the rally drew approximately 30,000 to march against the Jugnauth administration. 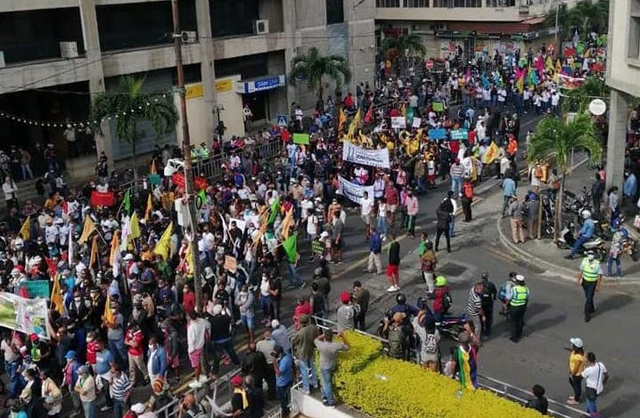 According to advocacy groups for stranded seafarers, approximately 1,500 Mauritian sailors still remain on cruise and merchant vessels around the globe. Having been stranded for months, hundreds of thousands of cruise ship workers from dozens of nations faced horrendous conditions in which they received little to no information about how they would return home, as the WSWS has reported.

Many workers were left to face financial ruin after having been pushed off company payrolls, with their employers deeming them “non-essential” for ship operation. By May, there were a number of COVID-19 and non-COVID-related crew deaths, and of the non-illness-linked deaths, many were broadly suspected to have been suicides. In June, the Seafarer’s Hospital Society of the UK declared that suicide had become “the foremost cause of deaths amongst seafarers.”

On May 15, the Mauritian National Assembly (Parliament) implemented the COVID-19 (Miscellaneous Provisions) Act and the Quarantine Act in response to the outbreak of the pandemic. The measures authorized by the legislation include warrantless police searches and seizures, the restriction of the country’s borders, as well as sweeping attacks on the living standards of the working class. One such provision eliminated the requirement for employers to pay workers a night shift allowance, a 15 percent bonus for employees scheduled to work outside of regular business hours.

Appleby Global, a worldwide legal firm specializing in services for private companies and financial institutions, explains the restrictions on work stoppages as outlined by the Mauritian COVID-19 Act: “The procedural agreement between employers operating in the transport, customs, electricity, hotel services, radio and television, refuse disposal, telephone, transport of passengers and goods and water supply sectors and the trade union ought to provide the number of workers, their occupations and departments for a minimum service during any strike or lock-out. Before proceeding to a strike or lock-out, the trade union or employer has to ensure that the minimum service is put into effect.”

At the time of the COVID-19 and Quarantine Acts’ passing, a stranded Mauritian cruise ship worker spoke anonymously to the WSWS. “With this bill, they took away our right to strike, and our freedom of expression has been removed. So while seafarers are stuck on board indefinitely, killing themselves, protests in my country have been made illegal. Now the whole population is angry about it.”

On June 10, Foreign Affairs Minister Nando Bodha announced the government plan to repatriate 3,500 of its citizens abroad which included a $1,300 price tag per individual returned. The steep cost for the right to return home was explained to have covered “meals and miscellaneous/ancillaries like tea and coffee” for a 14-day quarantine period, two PCR (polymerase chain reaction) tests for COVID-19 and other “support and ancillary services.” The price of one charter flight between London and Port Louis for 150 returning citizens was listed as €215,000.

Mauritian workers returned home via the government’s repatriation plan reported that many of the quarantine provisions were improperly cleaned and insect-infested. In many cases, the meager food rations provided were already rotten or beyond their expiration dates. In other instances, repatriating Mauritians were told that they would be released early from their costly quarantines.

The repatriation plan was coordinated in an exclusive public-private “partnership” between the government and Air Mauritius, a subsidiary of Mauritius Air Holdings Ltd., a major Mauritian tourism corporation, of which the government owns over 43 percent. In other words, the Jugnauth administration and Air Mauritius restricted travel to the island by any other means but its own, including cruise ships passing by the country which contained stranded Mauritian citizens. Then, it raised the prices in an attempt to aid the airline’s falling shares.

The annual budget for 2020/2021 announced in early June will impose yet another set of savage austerity measures, aimed squarely at the highest bracket of earners in the Mauritian working class. The so-called “solidarity levy” imposes a massive tax hike on those earning an annual salary of more than 3 million Mauritian Rupees (Rs/MUR)—approximately $75,000.

Shrouding its intentions in the most cynical, left-sounding doublespeak, the report by Dr. Renganaden Padayachy, Minister of Finance, stated, “to ensure more social justice, we are reviewing the solidarity levy. [T]he levy of 5 percent on the excess amount of chargeable income plus dividends of a resident Mauritian citizen will now be 25 percent and applicable as from Rs 3 Million annually. […] This is the patriotic appeal which we make to those who earn most. [W]e expect to receive more than Rs 3.5 billion of additional revenue from this levy. As representatives of the people, we are proud to contribute to this levy.”

The switch to the CSG also introduces the Service Employment Cheque (SEC) system, in which “self-employed,” i.e., casualized workers, will also be required to contribute to the new national pension system. What is touted in the budget by Padayachy as the replacement of an “unfair,” “regressive” system with a “progressive” and “collective” alternative, will in actuality serve as a boon for companies which stand to save millions on pension contributions.

An early June article from Maurice-Info.mu entitled “Rebuilding Mauritius: The New Future?” gives a telling report of the intentions of the pandemic budget. “The Mauritian economy, through its key economic pillars was stuttering during the pre COVID-19 period and the measures announced [in the new budget] allow for the reset button to be pressed.”

The July 11 protest was organized by a “Solidarity Assembly” in which “more than 300 representatives of various movements” participated. Organizations involved in the event included several major industrial trade union groups and agricultural associations, such as the Federation of Civil Service & Other Unions, the Hotel & Restaurant Employees Union (HREU), All Employees Confederation, General Workers Federation, Casino Employees Union, Telecom Workers Union, the Union of Bus Industry Workers and the Small Planters Association.

The Solidarity Assembly issued a patchwork list of demands in the form of an open letter to the Jugnauth administration. These demands included broad appeals for Parliament to restore the rights removed in the COVID-19 Act, as well as calls for the general strengthening of the welfare state, the public sector, workers’ rights and sustainable industry. The letter also stipulated that a union representative should be elected to the board of directors for all government agencies in which public money is concerned, as well as a demand that Mauritius’ tourism sector be “made more profitable for workers.”

“Frederick,” a Mauritian cruise ship worker who has been stranded since March, gave a statement to the WSWS using an alias out of a fear of retaliation from both his employer as well as the government. Speaking on the July 11 event in Port Louis, he said, “Mauritians rallied thousands of people, but I really don’t know how much this will help. The government feels powerful, especially since they know that we’re a peaceful people. Corruption is at its peak in the country and the law is only enforced upon the poor. They always seem to be able to get away with anything they want and their answer to the population is, ‘yes, we’re working on fixing it.’” He continued, “We’ve done everything. We wrote a letter to the prime minister, the president and we even had an interview on major American news media—still nothing. If they don’t tell us what they intend to do now, I don’t know what else can be done.”

When asked if he thought that Mauritian workers have a valuable ally in workers around the world struggling against similar conditions, Frederick agreed. “An alliance with the working class of other countries will definitely help, although it’s certainly a difficult route. On the other hand, not much will get better unless we make a major change to the whole political system.” He continued, “I want to follow the updates on WSWS—I hope that Mauritius will be part of the global upsurge of consciousness in the international working class and that Mauritians will stand up for themselves for a change.”

The WSWS urges Mauritian workers to reject all appeals to the agencies of capitalism at home, including those which conceal their programs of chauvinism, protectionism and nationalist economic policy in leftist-sounding phraseology such as the unions involved in the Solidarity Assembly. Instead, workers must form independent rank and file committees of struggle in conjunction with similar workers’ organizations across the globe. These organizations must be uncompromisingly committed to a program which replaces capitalism and the nation state system with an international, socialist planned economy.