Australia yesterday registered the highest number of new coronavirus infections since the beginning of the pandemic.

The total of 502 new cases surpassed the previous daily high of 469 cases on March 28, nearly four months ago. Unlike the initial wave of infections, which was driven by people returning from their overseas holidays, the latest surge features widespread community transmission. More than 2,000 cases remain under investigation, meaning that health authorities do not know how and where these infections were contracted.

Just six weeks ago, on June 9, only 2 new coronavirus cases were reported across Australia. The return of large scale infection is a consequence of the decision by Prime Minister Scott Morrison, and every state leader, Labor and Liberal, to lift lockdown measures in May. 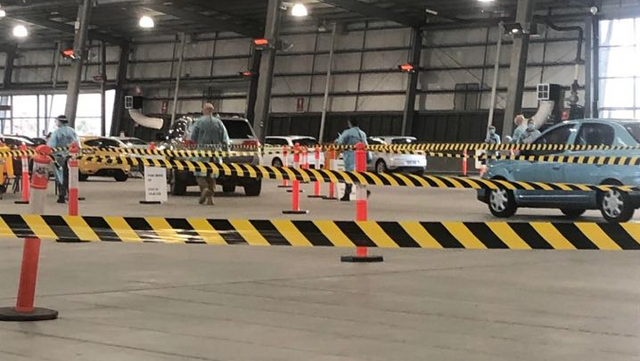 This move defied evidence within an expert report submitted by epidemiologists and medical scientists that lockdown measures needed to be maintained for at least another month in order to eradicate the virus. Like their counterparts in the US and internationally, the Australian ruling elite has throughout the pandemic prioritised the needs of big business and finance capital ahead of public health and safety.

Melbourne remains the worst affected city, with 484 of the 502 total cases yesterday registered in the state of Victoria. There was one case reported in both Queensland and South Australia, and 16 in New South Wales (NSW). Earlier today, an additional 403 cases was recorded in Victoria and 19 in NSW.

Across Melbourne, 45 aged care centres have registered one or more infections among their staff or residents since July 8. The worst clusters are at Menarock Life Aged Care in Essendon, with 38 infections, Estia Health aged care in Ardeer, with 54 cases, and St Basil’s Home for the Aged in Fawkner, with 69 cases. Federal health authorities have taken over the operating of St Basil’s, with a replacement workforce brought in.

Infections were so widespread there that every regular staff member has to self isolate at home for a fortnight. Workers have reported that the facility’s management did not enforce proper use of personal protective equipment (PPE), with staff told this was optional.

In some affected aged care facilities, residents are being isolated in their rooms instead of being evacuated if they are not infected and hospitalised if they are.

Marylouise McLaws, an infection control expert at the University of NSW and adviser to the World Health Organization, told the Guardian that aged care facilities lacked the necessary pressured rooms, Hepa filters, and designated areas for PPE storage. “It’s very difficult to all of a sudden turn really a shared home into a proxy hospital with cutting-edge infection control,” she said.

When residents of Sydney’s Newmarch House were left inside their infected facility during an outbreak in April, 19 elderly people died of COVID-19. The Victorian government’s failure to organise comprehensive evacuation measures for affected aged care facilities will likely lead to many more deaths.

Melbourne and the neighbouring regional shire of Mitchell have been in official lockdown since July 9. Residents are only permitted to leave their homes for four reasons—to exercise, purchase supplies, provide caregiving, and to go to work or school. Ten postcode “hotspots” had the same restrictions imposed a week earlier, on July 2. Despite this, the coronavirus infection numbers have not declined.

Epidemiologist Raina MacIntyre, from the University of New South Wales’s Kirby Institute, told the ABC: “Generally, when you apply an intervention, you would expect to see the effects in two weeks, which is the incubation period. So it is very concerning to be still seeing figures in the triple figures.”

The Victorian Labor government has now mandated the wearing of masks or face coverings in public. It has not, however, imposed any restrictions on business activity, despite admitting that 80 percent of all infections since May have occurred within workplaces.

The pandemic has been exacerbated by the casualisation of the workforce that was engineered over the last four decades by successive Labor and Liberal governments as part of their “free market” offensive against the working class. Fewer than half of all workers now have a permanent full-time paid job, with proper leave entitlements. More than 25 percent of all workers are in casual employment, with zero job security and no paid leave of any kind.

Many of the aged care clusters are understood to originate from infected casual workers who were compelled to take different shifts across multiple facilities.

Other workplaces have likewise been affected by casual workers who have not self-isolated due to fears of losing their job, or being unable to cope with lost wages. Victoria’s Premier Daniel Andrews acknowledged yesterday: “If they don’t work the shift, they don’t get paid for the shift—they don’t have sick leave. This is a commentary on insecure work.”

The Labor leader did not take any responsibility for this “commentary,” nor announce measures to address insecure working conditions. Instead, as a band aid measure, casual workers who take a coronavirus test are eligible for a new $300 payment to self isolate while awaiting the result, with an additional $1,500 available for those who test positive and need to forego at least two weeks wages. It remains to be seen whether the limited payments will have any affect on virus transmission.

Many other workers continue to be exposed to dangerous conditions—including tens of thousands of school teachers. Schools in Victoria opened for Term 3 last Monday, with all public teachers expected to work on-site even if their students are learning from home. Around 100,000 Years 11 and 12 students are attending school each day, together with Year 10s doing senior subjects, children in specialist schools, and children whose parents cannot supervise them at home.

In just four days, 21 schools have reported infections among staff and/or students. These are across multiple areas of Melbourne—many in working class suburbs such as Dandenong High School, Roxburgh College, and Gladstone Park Secondary, others in upper-middle class and inner suburbs such as Victorian College of the Arts Secondary School and Toorak Primary School.

Keeping schools open is regarded by state and federal governments as a key measure to ensure corporate Australia has access to the required workforce. The reckless endangerment of teachers and students safety flies in the face of growing scientific evidence. A South Korean research study reported this week that both adolescents and children aged 10 and over are equally infectious with COVID-19 as are adults.

Victorian authorities today reported that four children are among the 201 people currently hospitalised with coronavirus.