It has now been 10 months since the collapse of the Hard Rock Hotel construction site in downtown New Orleans, and still the bodies of two workers killed in the collapse have yet to be retrieved and given a proper burial by their families.

Three workers employed by a construction firm to build a Hard Rock-themed hotel were killed in October during a multi-story floor collapse caused by months of poor management and corrupt skirting of regulations by the construction firm and the property owners operating the site.

Quinyon Wimberly, Jose Ponce Arreola, and Anthony Magrette died as a result of a fully preventable disaster, and dozens of others were injured. Nearly a full year later, only Magrette’s body has been recovered; Ponce Arreola and Wimberly are still located on the 8th and 10th floors of the partially collapsed building. 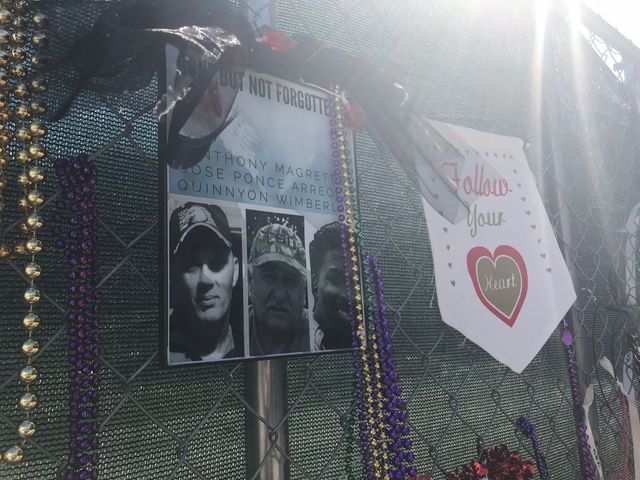 A memorial for the three workers who were killed

As of this week, newly announced plans to retrieve Wimberly and Ponce Arreola have already seen setbacks due to inclement weather. In June, construction crews began demolishing nearby buildings as a safety precaution with a plan to eventually remove the massive crane that is dangerously close to falling from the top of the partially collapsed building.

Lawsuits and arguments between the city and the building developers have led to several months of delays and false starts in recovery and demolition efforts. The question of who will pay for such efforts has come up again and again as insurance costs among other expenses have skyrocketed amid local and national outcry over the collapse and the indignity of leaving the bodies of Wimberly and Ponce Arreola to rot in the rubble.

“We lost a day and a half last week to weather,” McConnel told the Associated Press this week. He reiterated his hopes that the bodies of both men will be recovered by the end of the week and blamed delays on the changing of plans to make it easier to maneuver the cranes necessary for use in the recovery. 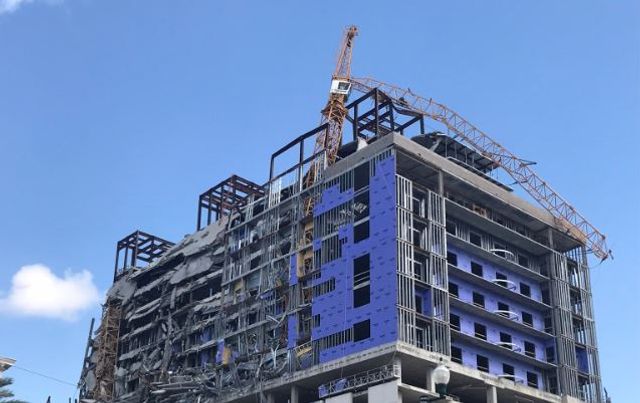 A portion of the collapsed Hard Rock Hotel construction site

“This is a tricky operation and we want to make sure everyone is safe,” McConnel said, explaining the most recent delay caused by the need to demolish a nearby wall in order to make room for crews to operate safely, “If something were to start to collapse, if they had to quickly maneuver the crane, that could pose a risk to not being able to swing the crane out of the way quickly. And the last thing we want is for one of those cranes to topple over.” The current plan is for recovery workers to begin at the 18th floor and “chip away” at the wreckage as they work their way down to the 11th floor.

The months and months of painstaking delays have led to widespread anger across the city, with many residents coming to see the site to be a grim and macabre eyesore amid the coronavirus pandemic and a historic unemployment crisis.

Ten months on, an official cause for the collapse has also not been officially announced. A federal investigation found multiple regulatory oversteps and safety violations committed by the firms in charge of the building.

The Occupational Safety and Health Administration (OSHA) completed an investigation a few months ago that concluded that there were several “willful” and “serious” safety violations that compromised the structural integrity of the construction site. Most of the blame was laid at the feet of the Heaslip Engineering firm, and nearly a dozen other firms and contractors were cited in the report. 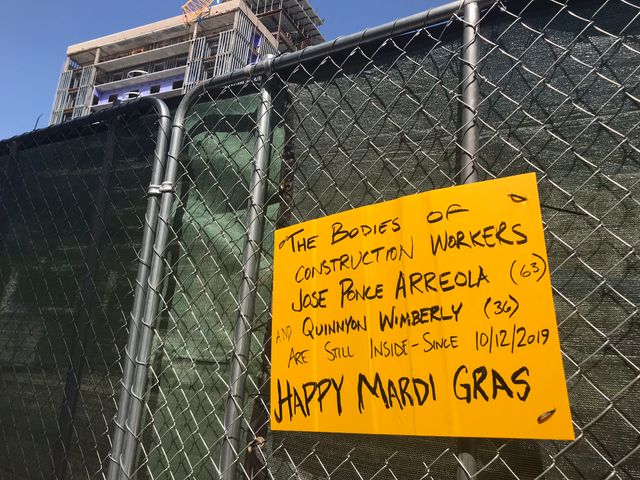 A protest sign erected on the fence surrounding the site

As of yet, no criminal charges against any individual have been filed, and the final tally for all the fines across the 10 companies cited in the OSHA report amount to a mere $306,000.

A lawsuit filed by 10 of the surviving workers injured in the collapse cited several agencies, developers, architects, builders, and engineers, for negligence in the construction. The suit detailed the various cost-cutting measures and structural regulatory violations that led to a weak structural support systems overladen with unsafe amounts of weight.

The suit alleged that not only was unskilled labor used but labor was poorly supervised, workers were often underpaid, and firms would hire undocumented workers in order to get away with labor violations and avoid minimum wage laws. Construction crews were also poorly supervised with a criminal lack of safety supervisors approving crucial implementations.

In the weeks following the initial lawsuit, one of the witnesses in the case, Delmer Joel Ramirez Palma, a Honduran national was detained by Immigration and Customs Enforcement (ICE) and deported shortly after giving interviews detailing the unsafe conditions and violations of the project. An ICE spokesperson denied that the deportation was related to the suit, but the message was clear to any whistleblower or undocumented worker who would want to speak out against unsafe and illegal working conditions.