It was amid a deepening social and political crisis that Hamilton: An American Musical came to the Disney Plus streaming service this July 3, in time for viewing on the 244th anniversary of the Declaration of Independence.

The musical, as most readers will know, has been an extraordinary, nearly unprecedented phenomenon since its opening on Broadway in February 2015. It reportedly earned $30 million in ticket sales before its opening. Once it premiered, obtaining a ticket for the show, for anything less than astronomical prices, was very difficult. In November 2016, Hamilton set a box office record, grossing $3.3 million for an eight-performance week. The original Broadway cast recording and other recordings associated with the musical have sold in huge numbers.

Hamilton’s appearance on Disney Plus has allowed a broader audience access to the piece, and provides the opportunity, with some of the hoopla having dissipated, for the viewer or critic to see if the musical lives up to its extraordinary reputation, or not. The verdict is mixed. 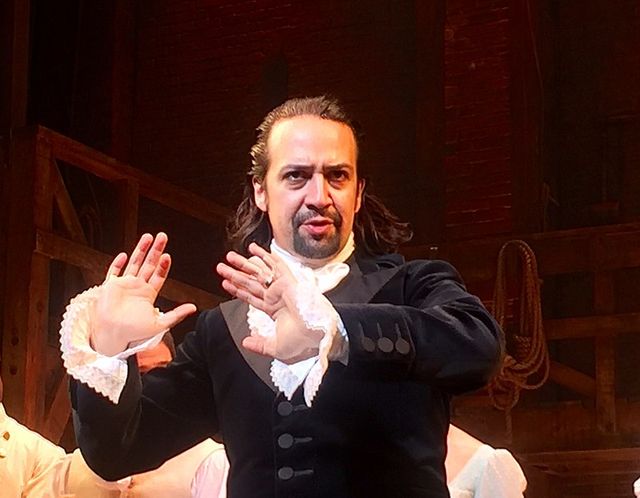 A portrayal of the American Revolution—especially a lively, modern one, through the rapid-fire medium of hip-hop—is certainly welcome and opportune. The Enlightenment notions of equality, freedom of expression, the right to revolt against tyranny and others are under fire today from every official quarter. They retain burning and immediate relevance.

The swift, even urgent style of hip-hop allows Hamilton to include a massive amount of material in the course of two-and-a-half hours (over 20,000 words, or more than triple the word count of some musicals with similar run times). The subject matter ranges from events like the Siege of Yorktown or the retirement of George Washington, on the one hand, to the personal and family life of the title character, marriage, fatherhood, adultery and a son’s death, on the other.

The creation of songwriter/actor Lin-Manuel Miranda and inspired in part by Ron Chernow’s 2004 biography Alexander Hamilton, the original musical performance premiered off-Broadway in 2015.

A highly complex and contradictory figure who stood on the political right of the early republic, Alexander Hamilton served as “right-hand man” to General George Washington, commander of the Continental Army, wrote most of the Federalist Papers urging the adoption of a new Constitution and became the first US secretary of the treasury, nine days after the department was created in September 1789. In Empire of Liberty (2009), Gordon Wood writes that however much Hamilton’s “sentiments shifted between monarchy and republicanism, the monarchical government of England was certainly the model for his financial program in the 1790s.” 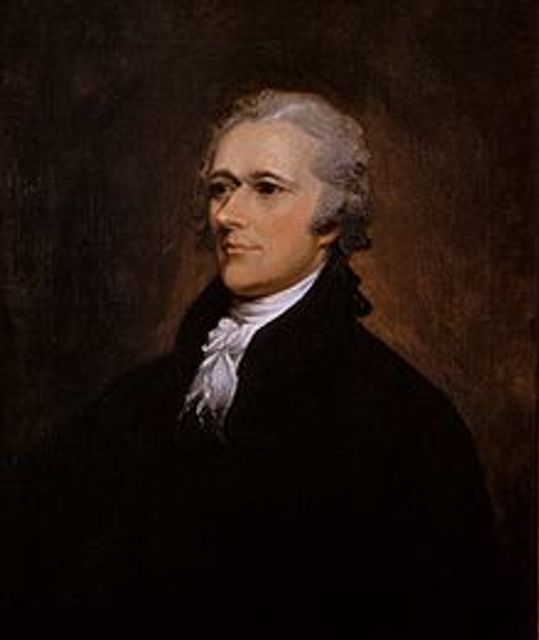 Wood describes Hamilton as something of a “natural aristocrat … at the beginning he had no estate or family to support him; his genius was all he had. And what genius it was! The worldly French politician and diplomat Talleyrand who knew kings and emperors ranked Hamilton as one of the two or three great men of the age.” It is probably the case that Hamilton has not been properly acknowledged in the past.

There is plenty to enjoy in Miranda’s Hamilton. The choreography and stagecraft constantly impress. The video recordings featured on Disney Plus preserve a “live” feel throughout, using many different camera angles, frequently alternated, and extraordinary close-ups to capture the action. Nor is it an exaggeration to count Miranda among the best hip-hop lyricists for his work here.

The number Yorktown, about the final major land battle of the American Revolutionary War in 1781, highlights the best elements at work in Hamilton. It begins with a slow, three-note piano motif, painting a picture of calm before the storm. As battle plans unfold, violins underscore the rising tension, and the title character raps,

And so the American experiment begins
With my friends all scattered to the winds.
Laurens is in South Carolina, redefining
Brav’ry.
We’ll never be free until we end slavery!
When we finally drive the British away
Lafayette is there waiting in Chesapeake Bay!
How did we know that this plan would work?
We had a spy on the inside. That’s right

Hercules Mulligan!
A tailor spyin’ on the British government!
I take their measurements, information and then I smuggle it!
Up
To my brother’s revolutionary covenant
I’m runnin’ with the Sons of Liberty and I am lovin’ it!
See, that’s what happens when you up against the ruffians.
We in the shit now, somebody gotta shovel it!
Hercules Mulligan, I need no introduction
When you knock me down I get the f=ck back up again!

The slower choral refrain creates an uplifting backdrop: “The world turned upside-down.” This and other numbers—particularly in the first act—have something to offer artistically.

Giving credit where due, Hamilton suffers from two gaping intellectual or historical flaws, closely intertwined: its treatment of its title character and that of Thomas Jefferson. 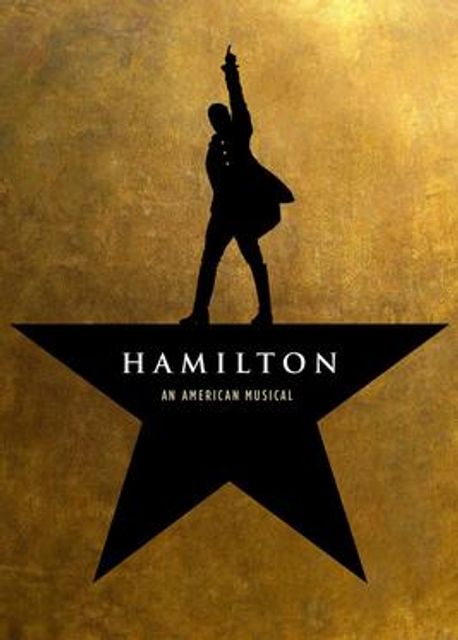 First, Miranda’s approach to Hamilton exceeds even the most generous allowances for artistic interpretation. A spokesman for the rising Northeastern merchant class, the talented Hamilton eventually supported high property ownership requirements for voting, a lifetime presidency (a quasi-monarchy), the brutal suppression of the Whiskey Rebellion in western Pennsylvania (1791-94) and enforcement of the authoritarian Alien and Sedition Acts (1798), to name a few episodes that go unmentioned here.

Certainly, none of this forbids admiration, or even an artistic rendering of Hamilton that has a favorable slant. But running parallel to uncritically extolling Hamilton is a cheap, crude denigration of the much more substantial, progressive figure of Jefferson.

The preeminent Enlightenment figure in the American Revolution—with the possible exception of pamphleteer Thomas Paine—Jefferson authored the Declaration of Independence, including the immortal words “that all men are created equal, that they are endowed by their Creator with certain unalienable Rights, that among these are Life, Liberty and the pursuit of Happiness.”

Jefferson championed the separation of church and state, the rights to privacy and free expression; he opposed a standing army as a tool of tyranny and advocated public education as the best weapon against it.

An owner of slaves and an inconsistent opponent of slavery, Jefferson had no shortage of contradictions and shortcomings, including his limited and utopian vision of an ever-expanding, egalitarian society of small farmers. None of this invalidates his progressive contributions, including his authorship of one of the most subversive documents ever written. Largely because of his commitment to Enlightenment ideals, although his personal situation is often advanced to demonstrate his hypocrisy or worse, Jefferson has come under sustained attacks in recent decades. 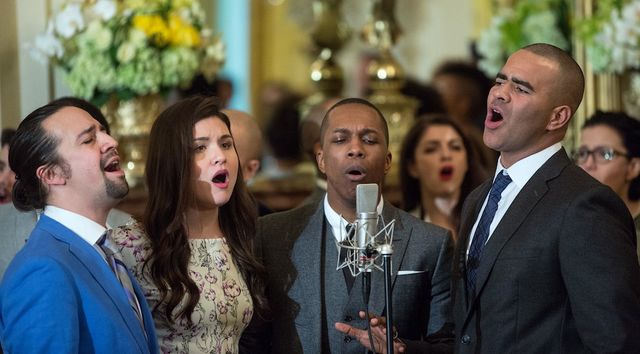 Miranda’s Jefferson slithers onto the stage in Act Two dressed like a Las Vegas lounge lizard, in a pink sequined coat. Jefferson has just returned from France, in time to celebrate the revolutionary victory and take a position as Secretary of State. “What’d I miss” he sings, accompanied by a cartoonish, vaudevillian piano chop.

The numbers What’d I Miss? and The Room Where It Happened severely disappoint, to say the least. In the latter song, Miranda adopts a thoroughly cynical attitude toward a compromise between Jefferson and newfound ally James Madison, on the one side, and Hamilton, on the other, that established a national bank and moved the US capitol to Washington D.C. The direct comparison between this compromise and contemporary congressional back-room maneuvers simply fails.

Hamilton intervenes briefly in more contemporary matters, directing political swipes at the American establishment of the 2000s. The frothing despot King George III quips as the Revolution erupts, “Once we beat the traitors, we’ll be greeted as liberators,” a caustic reference to war criminal Dick Cheney’s March 2003 prediction about the outcome of the then-impending US invasion of Iraq. That criminal, neo-colonial war was supported by both parties and the US media, including, prominently, the New York Times.

Then there is the pronouncement by Hamilton and the Marquis de Lafayette (a French aristocrat and military officer who fought in the American Revolutionary War) in the number Yorktown, “Immigrants: we get the job done,” a rebuke to the anti-immigrant chauvinism encouraged by both major parties, most demagogically by the Republicans. It may be that Miranda had Donald Trump—who by the time Hamilton debuted in 2015 had begun hinting at a presidential run fueled by xenophobia—in mind here.

In any event, Hamilton has generally earned a warm reception in Democratic Party circles and bears the markings of that political orbit.

Only people of color fill the major roles in Hamilton. Colorblind casting is all to the good, and the musical has given some exceptionally talented people a well-deserved opportunity, but it is difficult to avoid the conclusion that “larger” arguments in line with identity politics precepts are being made. Thematically, Hamilton hints that various “outsiders” can enjoy success in America if they only play their cards right. This echoes the social outlook of so many aspiring urban professionals and entrepreneurs from different identity groups.

A slew of pro-business interests claim the mantle today of the mercantilist, semi-authoritarian Hamilton—including the extreme right-wing Federalist Society with its Alexander Hamilton Award for entrepreneurship, the Hamilton Project of the Democratic Party-aligned Brookings Institution, etc. As noted, Jefferson’s legacy urges contempt for concentrated power, egalitarianism, taxing and spending for public education—all of which instill fear and contempt in elite circles. Funding for a Jefferson: The Musical would prove elusive …

Still, Hamilton’s overall zeal for revolution and its comedic shots at tyranny are always in season. If anything, the production has only increased in relevance since its initial release. Ironically, given the current climate, it is doubtful that a figure like Miranda, or anyone else, would dare mount a production in honor, even irreverent honor, of a Founding Father today.

Only last month the president of the United States attempted a military coup in the face of widespread protests against police murder.

King George’s memorable line in Hamilton, “cuz when push comes to shove, I will kill your friends and family to remind you of my love,” will have an unmistakable echo for countless viewers of Hamilton.

The significance of the July 4 online discussion, “The Place of the Two American Revolutions: Past, Present and Future”
[6 July 2020]