A survey by the Sutton Trust into the impact of COVID-19 on early years education has revealed enormous levels of anxiety among parents over sending their children back to regular nursery and childcare settings.

Before the national lockdown in March, 68 percent of parents accessed formal early education or childcare, defined in the report as a preschool, nursery, a childminder or school. By June, 83 percent of these parents had not sent their children back.

Almost half of surveyed parents cited concerns about the increasing transmission of coronavirus and of it being brought back home. Most remaining parents cited worries that they were unable to access a place, with providers closed or on reduced staff. Two thirds of parents without childcare are feeling stressed, worried or overwhelmed. 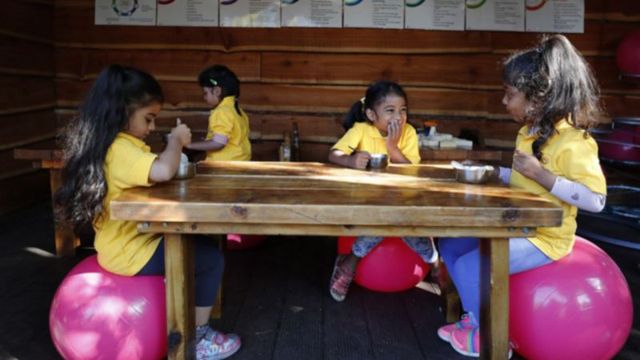 Children have breakfast at the Little Darling home-based Childcare after nurseries and primary schools partially reopen in England after the COVID-19 lockdown in London, Monday, June 1, 2020. (AP Photo/Frank Augstein)

In May, the Johnson government directed all nursery and early years primary classes to open their doors on June 1, as the first step in a criminally reckless “phased” reopening of schools. The youngest children, including babies and toddlers, would be sent back first, despite the impossibility of social distancing, with the sole aim of pushing their parents back to work.

Close social contact is an integral part of early years education. Play, social co-operation and interaction, both with staff and other children, are necessary for a child's vital social and emotional development.

On July 2, the government announced its final guidance for all school children to return full-time in September. It included changes to previous instructions for early years settings, removing the requirement to keep children in small consistent groups, known as “bubbles.” This change took effect on July 20.

Parents have every right to be fearful of a return to nursery under these conditions.

On the same day as the Conservative government’s new guidance was issued, schools throughout Leicester closed as a “local lockdown” was imposed. COVID-19 infection rates in the city of 329,000 people had increased by over 70 percent over a two-week period.

Health Minister Matt Hancock cited an increase in the number of under-18-year-olds testing positive for coronavirus as one of the main reasons for imposing the city-wide lockdown. Dr Nick Phin, Public Health England (PHE) incident director, said those under 19 testing positive in Leicester rose from 5 percent in mid-May to 15 percent.

Outbreaks of COVID-19 at nurseries and pre-schools have led to wider community transmission. At the Acorn nursery in Milton Keynes, England, nine children, four staff and 10 family members tested positive for coronavirus last month. In the US state of Texas, at least 1,335 people tested positive from childcare facilities between May and June. Of those infected, 894 were staff members and 441 were children.

At the same time, research is continuing into ways that COVID-19 may be linked to a range of serious conditions in young children.

This month, the Lancet reported key findings from 78 cases of Paediatric Inflammatory Multisystem Syndrome (PIMS-TS) in the UK between April 1 and May 10. Cases of PIMS-TS occurred at double the normal rate and were reported by 21 of 23 Paediatric Intensive Care Units, coinciding with peak COVID-19 hospital admissions. The median age of patients was 11 years.

A potentially fatal syndrome known as Kawasaki Disease, which can cause severe heart complications, has also developed during the pandemic among a small number of children in the US and Europe.

The Sutton Trust’s report exposes the bogus and completely cynical character of the government’s pretence that they are reopening pre-schools and nurseries out of concern for children’s social, educational, and emotional development and welfare.

The report highlights the devastating impact of decades of austerity by Tory and Labour governments, with the pandemic triggering an existential crisis. A staggering one quarter of settings reported they were unlikely to still be operating next year, rising to one third of providers in deprived areas.

Even before the pandemic, the report explains, the early years and childcare sector were “struggling and in crisis in the face of rising costs, unstable workforce supply and insufficient government funding.”

September will be the litmus test for the long-term survival of childcare provision, the report warns.

In deprived areas, 42 percent of providers say they are likely to make redundancies in the next year. The report stresses, “The impact of the pandemic on the early years workforce has been enormous. In Birmingham, the survey revealed high levels of staff anxiety throughout the crisis… A picture has emerged of a highly stressed and worn down workforce whether they had been open or closed during the lockdown.”

A substantial percentage of the 90,000-strong early years workforce are over 55 years old, placing them at heightened risk from COVID-19.

In the last 10 years more than 1,000 Sure Start centres—that provided a wide variety of services designed to support children's learning skills, health and well-being—have closed due to Tory austerity cuts enforced by Labour controlled councils, forcing the poorest families to rely on volunteer provision run by charities and the church. The authors note that, “Cuts to Children’s Centres over recent years have removed a vital source of support for both children and families, which could have played a valuable role during this time.”

The Sutton Trust has appealed for an urgent support package of £88 million focused on the most disadvantaged areas. But this is a drop in the ocean and will do little to address the massive needs throughout the sector for parents, children, staff or providers. Local Authority childcare is only partially funded from central government, providing just £3.5 billion a year, leaving an estimated annual shortfall of £55 million made up by charging parents.

Earlier this week, Labour Leader Sir Keir Starmer made clear his party’s total support for the Johnson government’s homicidal campaign to lift social distancing measures and reopen the economy, “to reopen our society and economy safely and successfully, we need the public to have confidence in the governments advice ... we need proper support for children to learn and for parents to get back to work.”

Parents and early years teachers and support staff must unite together and form rank-and-file committees to fight the austerity agenda of the Tories and Labour. Billions are needed to finance free and universal provision of high-quality early years nurture and education for children. The thousands of qualified early years staff paid a pittance should receive salaries commensurate with their critical role in society.

Parents with young children should not be forced back to non-essential work. They must be provided with a living wage so that they can look after their young children during the pandemic if they so choose.

For those key workers who rely on nurseries, additional support must be available to enhance the cleaning and safety of all preschool and nursery facilities. Staff must receive full personal protective equipment and regular testing, with a fully qualified nurse on site at all times.

No to the reopening of schools! Build action committees to safeguard children and teachers!
[30 May 2020]

The impact of the pandemic on childcare in the US: A social catastrophe affecting generations
[14 April 2020]