Germany’s grand coalition government plans to introduce a “new voluntary military service” from next April. The announcement was made by Defence Minister Annegret Kramp-Karrenbauer (Christian Democratic Union, CDU) at a press conference last Thursday at the Bendlerblock, one of the Defence Ministry’s official sites.

Kramp-Karrenbauer, who appeared alongside the deputy inspector general of the army, Markus Laubenthal, and Peter Tauber (CDU), the state secretary in the Defence Ministry, left no doubt about the fact that the new military service was part of a comprehensive militarisation of society. It has two key goals: a major deployment of the army domestically, and the recruitment of new soldiers for external wars.

The new military service with the slogan “Your year for Germany” is “an option for men and women, whether they be young or old, who want to become engaged for Germany,” asserted Kramp-Karrenbauer. It takes up “the issues we’ve been thinking about for some time, specifically building a strong bridge between the concept of protection on the home front and the concept of the military reserve.” 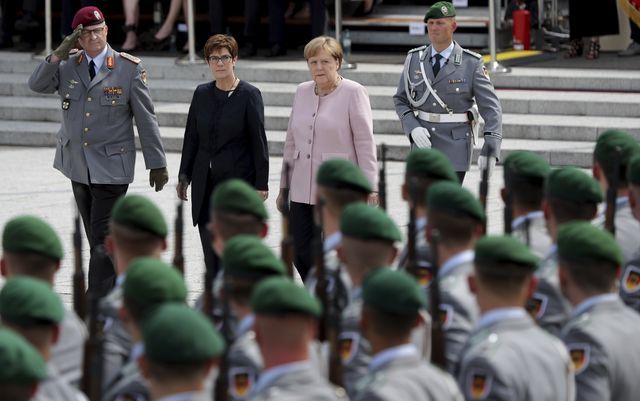 In a programme lasting seven months, an initial contingent of 1,000 recruits will be trained. During this time, they will make “initial contact with their future unit, the so-called RSU companies, the regional security and support units for homeland protection.” This will be followed by “a six-year long service as a reservist in an area close to home, which will in practice be the RSU closest to their home.”

In other words: the regional security and support units, which have been part of the territorial reserves since 2012 and are commanded by the state military command structures in each German state, will be significantly strengthened and transformed into rapid and permanently deployable fighting units. This has nothing to do with disaster response or providing a “helping hand” during the coronavirus pandemic. Instead, the goal is the defence of the capitalist state and its institutions.

“It’s about protecting critical infrastructure, not just in the army, but other things too,” said Tauber. It provides “the opportunity to train young people specifically for security tasks for six years, and not just in the general reserves, but to solidly anchor them in a company, in their state or region.”

The “military advantage” is that in an operational situation “you don’t have to start with a general call to the reserves...to engage.” Instead, “we have appropriate companies ready to deploy,” he continued.

In the context of current developments in the US, where Trump is mobilising paramilitary units against protesters, and of German history, this must be taken as a serious warning. Among the victims of the German military’s terrorism were revolutionary workers and their leaders, including Karl Liebknecht and Rosa Luxemburg, who were murdered by far-right Freikorps forces in January 1919.

Today, the German military is seething with right-wing extremist networks plotting a violent putsch and the murder of political opponents. In a noteworthy development, a Defence Ministry employee responsible for social media was removed from the social media team on the same day as the announcement of the new military service programme because of his right-wing extremist views.

This did not produce any change in course from the Defence Ministry. On the contrary, the army’s recruitment campaigns are directed towards right-wing elements. The new “homeland protection” is “a tremendous opportunity for young people who feel obliged to serve their army and their country, and bound to their homeland, and who want to fill an important gap in the armed forces,” said Tauber.

Among right-wing extremists and neo-Nazis, the phrase “homeland protection” is a code word. For example, the National Socialist Underground (NSU), which was responsible for the deaths of nine immigrants, recruited its members from the so-called “Thuringia Homeland Protection” force.

A major consideration in the creation of homeland protection units domestically is the preparation of soldiers for external wars. “The young people who enter the service will receive military training and participate in exercises with the reserves,” added Tauber.

The main task is to “recruit for the wide variety of tasks” the army has, on the basis of “the strategy of the reserves, the doctrine of the army, and its capacity profile. For that, we need men and women. Active serving soldiers can’t manage it alone.”

An examination of the strategic papers referred to by Tauber gives a sense of the wide-ranging plans for militarisation being prepared behind the backs of the population. The “doctrine” openly declares that after its horrific crimes in two world wars, the German military is preparing for another major war.

The main purpose of the German army’s new policy doctrine adopted in 2018 was to prepare all military and civilian structures for war. “Plans must be made for rapid strike and follow-up capabilities for a very large operation,” stated the doctrine. “They must be effectual in a hybrid conflict as it develops and escalates across the full spectrum of its effects, in all its dimensions, in a joint, multi-national armed force, and in all types of operations. At the beginning of a very large, high-intensity operation, a huge deployment of readily available forces and equipment is necessary. Provisions to regenerate the personnel and material will be required.”

The new military service is a component of this mad drive towards rearmament and war. “All six areas of military organisation are currently working together on strengthening the territorial structures,” Gen. Laubenthal told the press conference.

“With the implementation of its strategy,” the army assumes “that the reinforcements will also have a quantitative impact.” He pointed to “synergy benefits in other areas, in the air force, navy and army, where they want similar training programmes.” However, all of this is merely “the beginning.”

She not only enjoys the backing of the far-right Alternative for Germany (AfD) for this strategy, but also the Social Democratic Party (SPD) parliamentary military commissioner, Eva Högl. Earlier this month, Högl described the ending of compulsory military service in 2011 as a “huge mistake.”