Throwing down the gauntlet before the Democratic-controlled committee, Barr focused his opening remarks on the ongoing crackdown in Portland by tactical units of Customs and Border Protection (CBP) and other federal special police forces. He presented it as part of an open-ended response to “mob violence” and “rioting” by anarchists and left-wing extremists.

Brushing aside the blatant violations of First Amendment rights of free speech and assembly and Fourth Amendment protections against arbitrary searches and seizures, he explicitly defended the use of tear gas and pepper spray against unarmed protesters and the seizure by police in military camouflage of demonstrators, who are then transferred in unmarked vehicles to secret locations for questioning. 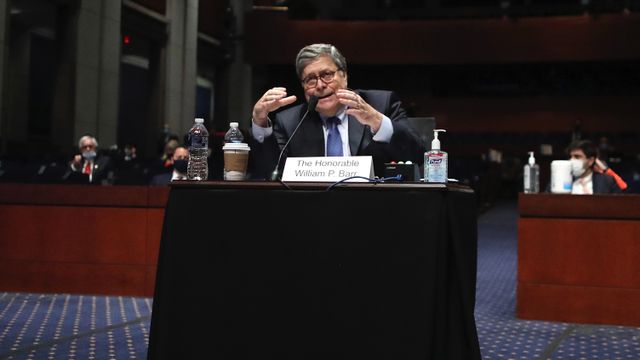 Attorney General William Barr appears before a House Judiciary Committee hearing on the oversight of the Department of Justice on Capitol Hill, Tuesday, July 28, 2020 in Washington. (Chip Somodevilla/Pool via AP)

Barr implied that Portland was only the beginning of the Trump administration’s response to the ongoing nationwide protests against police violence that were triggered by the murder of George Floyd by Minneapolis police in May. Speaking in the course of the hearing of “violence sweeping through the country,” Barr said, “We are concerned about this problem metastasizing around the country… There’s no doubt in my mind that it would spread.”

The Trump administration has already put federal tactical police on standby in Seattle and begun deploying an additional 150 federal cops to Portland. In addition, it is dispatching agents of the FBI; the Bureau of Alcohol, Tobacco, Firearms and Explosives; the Drug Enforcement Agency; the US Marshals Service and other federal agencies to cities across the country, including Chicago, Detroit, Philadelphia and Albuquerque, New Mexico.

In his opening statement, Barr blamed the popular response to George Floyd’s murder for rising crime rates in a number of cities. Citing calls to “defund the police” and “demonization of police,” he said, “When a community turns on and pillories its own police, officers naturally become more risk averse and crime rates soar.”

Turning to the crackdown in Portland, he said, “Every night for the past two months, a mob of hundreds of rioters has laid siege to the federal courthouse and other nearby federal property… What unfolds nightly around the courthouse cannot reasonably be called a protest; it is by any objective measure an assault on the Government of the United States.”

This is a lie. The ongoing protests in Portland and other cites remain overwhelmingly peaceful. It was the deployment, against the opposition of state and local officials, of a special tactical unit of the CBP anti-immigrant police, called BORTAC, that led to an uptick in vandalism, much of it, no doubt, carried out by police provocateurs. BORTAC has been dispatched to US war zones in the Middle East and Central Asia and is known for its agents’ fascistic mind set and brutality.

In the course of the hearing, Barr also defended the violent dispersal by hundreds of National Guard troops and federal police of demonstrators peacefully protesting across from the White House on June 1. As the demonstrators were being attacked in Lafayette Square, Trump gave a speech in the White House Rose Garden in which he declared himself the “president of law and order” and said he would invoke the 1807 Insurrection Act and deploy active-duty troops against protesters across the country, branding them as “domestic terrorists.”

As the World Socialist Web Site stated at the time, this was an attempted coup d’etat against the US Constitution, aimed at establishing a presidential dictatorship based on the military, the police and fascistic militia forces loyal to Trump. It was blocked at that time by opposition from within the military, with the military brass deeming such a move premature, insufficiently prepared and likely to unleash an eruption of social protest that would be uncontrollable.

As the WSWS has repeatedly warned, the plotting has not ended, and the events in Portland demonstrate that the White House remains the cockpit of a conspiracy to destroy democratic rights and establish authoritarian rule, driven by the unprecedented crisis of American capitalism and the acute crisis of the Trump administration.

This was reflected, in different ways, by the response of both the Republicans and the Democrats on the Judiciary Committee to Barr’s testimony.

The Republicans to a man described the protests as criminal mob actions and the protesters as terrorists, anarchists and rioters. A common refrain was the supposed role of Antifa in masterminding demonstrations that have occurred in hundreds of cities and towns in the US and around the world.

Texas Representative Louie Gohmert invoked the Chinese Communist Party, the Bolshevik Revolution and the “tactic of Marxists to kill police” and asked, “Should we shut down these protests during the pandemic?”

The Democrats responded with their typical cowardice and impotence. Not one characterized Trump’s actions for what they are—moves to establish a dictatorship. There were no calls to force Trump’s removal or for popular protests to demand a halt to the police state attacks.

To the extent that Democrats on the panel addressed the events in Portland and the June 1 crackdown in Washington, they presented them as mere political ploys to advance Trump’s electoral chances in November. This theme was struck by Judiciary Committee Chairman Jerrold Nadler, Democrat of New York, in his opening remarks.

He attacked Barr for “forcibly and unconstitutionally” suppressing dissent, “all in an apparent attempt to assist the president’s reelection.”

Most of the Democrats avoided these issues entirely, focusing instead on Barr’s attacks on the anti-Russia Mueller investigation and his interventions into the criminal cases of Trump cronies Roger Stone and Michael Flynn. A few denounced Barr for echoing Trump’s attacks on mail-in ballots.

Hakeem Jeffries of New York cited Trump’s repeated tweets and statements threatening to reject the results of the election if they go against him and asked Barr what he would do if Trump refused to leave office. Barr brushed the question aside with the absurd claim that he was “not familiar with those statements.”

None of the members of the Congressional Black Caucus on the committee referred to Portland or the June 1 events in Washington. Instead, they focused on the general question of police killings and violence, framing it entirely as a racial matter. Representative Karen Bass, the chair of the Congressional Black Caucus, merely asked Barr to look into the use by police of the sedative ketamine to suppress suspects.

The sharpest questioning came from Ted Lieu of California. He cited the US Constitution and a forty-year old Supreme Court decision establishing that it is illegal for police to arrest and question someone without probable cause. He cited news articles describing precisely such illegal seizures in Portland.

Barr made no attempt to deny that protesters were being arbitrarily picked up and arrested in Portland, but all Lieu could muster was to urge Barr “to instruct your federal officials to comply with the Constitution.”

Democrats and Republicans alike are petrified by the prospect of an upsurge of class struggle fueled by the pandemic and the exposure of the incompetence and inhumanity of capitalism and the entire political system. While Trump and the Republicans openly attack the Constitution and move toward dictatorship, the Democrats align themselves ever more closely with sections of the military and the intelligence apparatus, while promoting racial politics in an effort to divide the working class.

Tuesday’s hearing underscores the correctness and urgency of the revolutionary perspective fought for by the Socialist Equality Party and the WSWS. As we stated in our statement of July 27, “Stop Trump’s coup d’etat! Mobilize the working class against authoritarianism and dictatorship!”:

But, above all, workers and young people must understand that the defense of democratic rights is, in essence, a fight against the capitalist system and its state. The methods that must be employed in this fight are the methods of class struggle. The conspiracies of the Trump administration and the ruling elites must be countered through the development of a strategy to transfer political power to the working class and establish socialism.

Trump’s plan to send paramilitary police throughout the US: The ruling class prepares for civil war
[22 July 2020]

The police-state crackdown in Portland, Oregon