A report published last month exposed egregious levels of wage theft targeting international students in Australia. It also warned that the so-called “reopening of the economy” and the desperate situation of international students experiencing financial hardship amid the COVID-19 crisis means they will be more vulnerable to exploitation and to worsening working conditions.

Written by Professor Bassina Farbenblum (University of New South Wales) and Associate Professor Laurie Berg (University of Technology Sydney) in conjunction with the Migrant Worker Justice Initiative (MWJI), the report analysed data from a 2019 survey of 5,968 international students, as part of the Information for Impact project funded by StudyNSW.

The respondents were nationals of 103 countries. The highest number were from China (24 percent), followed by India (14 percent). 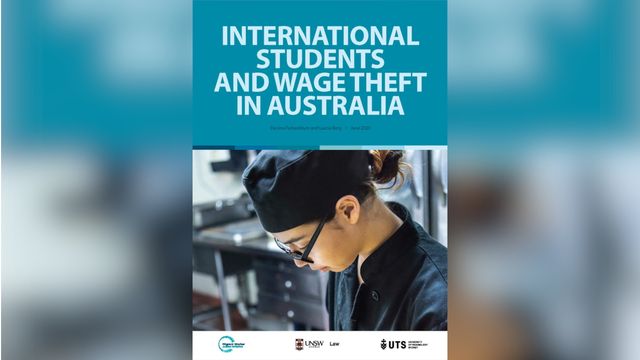 Over a quarter of respondents (26 percent) earned $12 or less per hour. The report noted that this figure has remained unchanged since the National Temporary Migrant Work Survey in 2016, despite marginal rises to statutory minimum wages since that time. The proportion of international students who reported that they speak “fair” or “poor” English on $12 or less per hour was 39 percent.

The report also noted that a “stark outlier was Chinese students who fared far worse than others at the most egregious levels of underpayment. In their lowest-paid jobs, well over half (54 percent) were paid $12 per hour or less.” Approximately one in ten were paid less than $10 per hour and 83 percent earned less than the minimum wage for casuals.

One in five respondents reported working very long hours and 9 percent had not been paid at all for a period.

Of the students surveyed who experienced problems at work, almost two thirds did not try to access help or seek information to address the problem according to the MWJI analysis.

The authors pointed out that 48 percent of respondents said that they feared losing their jobs if they complained. They write that this concern is “likely accurate,” as 7 percent of all respondents reported that they had in fact lost their jobs as a result of a complaint. This would be a substantial proportion of those who had raised issues at work. Thirty-eight percent said that they did not seek information or help for fear of affecting their current or future visas.

Like young workers, students and other casual and part-time workers across Australia and internationally, many international students lost their casual jobs as a result of limited social distancing measures introduced in response to the spread of COVID-19.

International students are excluded by nationalist and anti-democratic laws from almost all government assistance, leaving those that lost jobs with no income and unable to pay for accommodation, living expenses or their exorbitant course fees. Many are no longer able to rely on assistance from family members in their home countries, who are also experiencing financial hardship brought on by the COVID-19 crisis.

Interviewed by Equal Times last month, Indian student Ajay is studying for a masters degree in data science at Melbourne’s Monash University. His course will cost $80,000. After the 25-year-old’s café job was suspended in March, he was left with just $50 in his bank account.

With the pro-business “reopening of the economy” in Australia, the report noted that international students will be even more vulnerable to exploitation “due to their highly precarious financial status and desperation for work in a more tightly constrained labour market.”

The authors added that this “will likely lead many to accept even poorer working conditions” and “intensify the factors that deter international students from seeking help or taking action when problems arise.”

In an interview with the Australian Broadcasting Corporation, Professor Berg said: “The government cannot treat international students and their labour as a utilitarian commodity. During COVID-19, many international students were essential workers in aged care, supermarkets, food delivery and cleaning, keeping Australians safe, fed and cared for. Yet the government turned its back on those who lost jobs and has failed to seriously address exploitation among those who are working.”

The report also pointed to the fact that many international students could not return home due to borders being closed, flights being unaffordable or unavailable or because they did not want to jeopardise their return to Australia to study amid uncertainties around the spread of the pandemic.

However, increasing financial hardship, concerns over their health and inadequate online learning support led tens of thousands of international students to return home when lockdowns were introduced in March. Most planned to continue their studies in Australia once COVID-19 had abated.

As a result of the reckless back-to-work drive, dictated by corporate profit interests, Australia has in recent weeks seen a resurgence in COVID-19 cases and has closed its international and most state borders. There have been several thousand new cases since the beginning of July, the majority in the state of Victoria.

According to the Special Broadcasting Service (SBS), approximately “120,000 students or 20 percent of total international enrolments in Australia are currently blocked from entering the country due to the border closure, of which nearly 7,000 are stranded in India.”

The federal government announced earlier this month that a “pilot” program to bring small numbers of international students back for the coming semester would be suspended.

The “Safe Passage” pilot program was tabled by the Canberra-based Australian National University (ANU) and the University of Canberra (UC) in early June. They proposed to fly 350 international students to Canberra this month. It was accompanied by a similar plan for 800 students to return to South Australia.

According to the ANU and UC, the program included stringent pre-departure and post-arrival testing and 14-day isolation upon arrival in Australia.

Federal education minister Dan Tehan told PIE News that the programs would only go ahead with the “reopening of internal state and territory borders within Australia” and “the return to on-campus learning for the benefit of domestic students and the international students who are already in Australia.”

ANU undergraduate student Harpragaas Singh, currently stuck in the northern Indian state of Punjab and unsure if he had even be shortlisted for the pilot program, told SBS: “I am totally disappointed with the way they are handling the situation for students and all other temporary visa holders who are currently stranded offshore.”

Universities across the country are pleading with the federal government to reconsider the proposals, but not out of concern for the future education of their international students.

Previously, students were required to be present in Australia for at least 16 months to be eligible. Among the changes are the granting of student visas to new students offshore, free visa applications and counting online study while abroad toward requirements for the post-study work visa.

However, the changes do not help international students who chose to defer their studies as the pandemic began to spread in March.

The situation confronting international students is a graphic expression of the social crisis being inflicted on the entire working class by governments and the corporate elite that they represent.

This underscores the need for a fight to unify international and domestic students, as part of the struggle to build a socialist movement aimed at establishing free higher education for all, and decent paid permanent jobs as a fundamental social right.