Just days after Victorian Labor Premier Daniel Andrews and health authorities suggested that a “peak” had been reached in the state’s COVID-19 surge, a record 723 infections and 13 deaths have been announced, in the worst 24-hour period since the pandemic began.

On Monday, when they revealed 532 confirmed cases in the state, Andrews and chief health officer Brett Sutton claimed modelling indicated that the height of infections had been reached. Tuesday’s tally of 384 cases and yesterday’s 295 were proclaimed by officials and the corporate media as signs that the worst of the crisis was likely over. The phrase “cautiously optimistic” was repeated ad nauseam.

Today’s grim figures brand these assertions as exercises in wishful thinking and public deception. Because the official response to the crisis, at the state and federal level, is shrouded in secrecy, the erroneous modelling that was touted cannot be subjected to scrutiny by independent medical experts or the public.

It is increasingly clear, however, that authorities have lost any control over the spread of the pandemic almost three weeks since limited lockdown measures were introduced in metropolitan Melbourne, the current epicentre.

On July 10, when those restrictions, mostly covering social gatherings and individual movements, came into effect, 288 new cases were announced. At that point, this was by far the highest number of daily infections in any state. A month earlier, on June 9, just two infections across the country had been confirmed.

The official attempts to downplay the scale of the crisis over the past days have served a definite political purpose.

They have been aimed at damping-down mounting demands for the shutdown of non-essential workplaces and schools from medical experts, health staff and growing sections of the working class, because of the impact that such measures would have on corporate profits.

This week, Julian Rait, Victorian president of the Australian Medical Association, called for the imposition of a harder lockdown centering on workplace closures. Doctors took to the media to anonymously advocate similar measures, warning that unless they were immediately implemented, weekly hospital admissions in Melbourne could surpass 700 and overwhelm the system.

Meat workers at a JBS plant in Melbourne’s west, where cases had been detected a fortnight ago, briefly walked off the job on Tuesday morning to demand safe conditions, while the Australian Principals’ Association called for the immediate closure of all Melbourne schools.

Some 35 cleaners employed by Spotless in the Melbourne suburb of Dandenong did not go to work yesterday, apparently over fears of infection after at least two cases were detected. The company immediately responded by taking them to the Fair Work Commission, the pro-business industrial tribunal.

In a similar vein, Andrews, with the support of Prime Minister Scott Morrison, has rejected demands for school and workplace shutdowns. Today, he only announced an extension of mandated mask wearing across the state, and stricter rules on nursing home visits in regional areas.

The premier has blamed ordinary people for the surge in workplace infections, which account for up to 80 percent of cases since May. He has claimed, without providing any evidence, that workers have been going to their places of employment while symptomatic. In reality, the deaths and infections are the direct consequences of the pro-business “reopening of the economy” and back-to-work campaign prosecuted by all governments since May.

The escalation of the crisis is directly linked to decades of cuts to the public healthcare system. Yesterday, the Age reported that when the pandemic struck Australia in March, the Victorian health department responsible for tracing communicable diseases had only 14 staff members, just six of whom were fully-qualified physicians, in a state with 6.4 million people.

As a result of funding reductions enforced by the Labor government, the number of Victorian public health officials covering communicable diseases had decreased by nine in the eighteen months prior to the pandemic.

In May, 2019, the Department of Health and Human Services warned that “a doubling of current staff numbers would still see Victoria as the least resourced state in terms of staff undertaking public health officer duties.” Accompanying calls for funding increases were rejected.

The revelations go some way to explaining why the vast majority of new cases in Victoria are reported as being “under investigation” and of “unknown origin.” The state government claims that there are 2,000 new staff “supporting” the miniscule public health department, but they are composed of inexperienced recruits and military personnel who have not been trained to deal with an unprecedented public health emergency.

With today’s increase, there are more than 5,000 active cases in the state. Of those, well over 3,000 are classified as being “under investigation,” meaning that the authorities do not know how they were acquired. As of Tuesday, 2,500 infections had been in that category for more than 48 hours. Some 900 of those had been confirmed more than a week earlier.

This means that in practice, the extent of the spread is a mystery. Authorities have also given up on any attempt to test all close contacts of confirmed infections. There have been 20,000 fewer tests in Brimbank, the local government area with the fastest rise of infections in Melbourne, than in inner-city areas with half the number of cases. 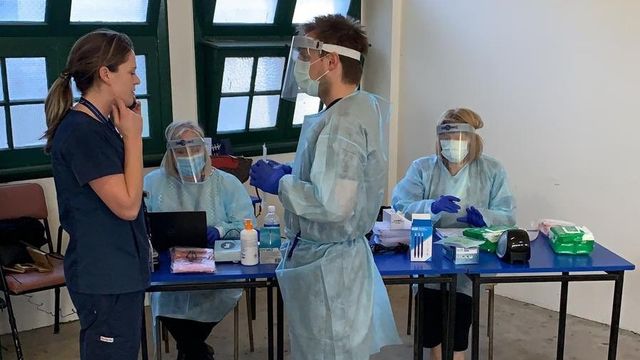 The breakdown of testing and contact-tracing, and the precarious conditions of low-paid casual workers have come together to create a catastrophe in the aged-care sector, where at least ten of today’s deaths occurred.

Prior to this morning, there were outbreaks at 87 Victorian facilities, the majority of them in Melbourne. Some 46 fatalities, or half of the state’s death toll, had been among residents. Since the pandemic began, at least 474 residents and 419 staff have been struck by the disease.

The spread has accelerated, as a result of casual staff being forced to work in multiple facilities. Just one in five at homes operated by private corporations had completed a training module on the use of protective equipment early last month.

St Basil’s, among the worst affected in Melbourne, was taken over by federal authorities last week because there were no longer enough healthy staff to operate the facility. Residents then reported inadequate food and the incorrect provision of medication. At least one relative was not informed that his father was gravely ill a couple of days before he passed away. Another family spent days trying to establish the whereabouts of their elderly mother after seeing from the outside of St Basil’s that her room was empty. Some private operators have been accused of blocking public health inspections for several weeks.

Today, Australian Medical Assistance Team personnel, including military offices, have been deployed to Victorian aged-care homes. This continues a growing domestic use of the army during the pandemic, and is the outcome of the gutting of healthcare and the privatisation of care homes.

Most residents who are infected are still not being moved to hospitals, despite being at a severe risk of succumbing to the disease. This has sparked fears that the healthy and the ill are not being isolated from one another. The decision not to hospitalise the elderly victims likely indicates that the Victorian hospital system simply does not have the capacity to do so.

Meanwhile, double-digit infections are continuing to be reported each day in the neighbouring state of New South Wales (NSW). Confirmed cases have also emerged in at least half a dozen schools.

Professor Mary-Louise McLaws, an epidemiologist and adviser to the World Health Organisation, warned yesterday that NSW was also on the cusp of losing control over the pandemic.

Noting that the state had recorded at least 154 new cases over the previous fortnight, McLaws wrote: “My analysis of the data suggests when cases reach 100 over 14 days— the ‘red zone’—then an outbreak becomes very difficult to control. This happened in Victoria on June 18, before cases skyrocketed and a second lockdown was called.”

Cases are also being reported in Queensland, where community transmission was previously eliminated. Individuals who allegedly breached travel restrictions are being publicly-vilified and threatened with six months imprisonment.

In reality, the reopening of Queensland’s borders, when coronavirus cases were rapidly rising in other states, was a criminal decision guaranteed to result in new infections and taken solely on the basis of corporate profit interests.