US coronavirus deaths soared past 155,000 on Thursday, with more than 4.6 million reported cases, according to Worldometer. One person is dying in the US nearly every minute of COVID-19-related causes. The US deaths account for nearly a quarter of the world’s death toll, which stands at more than 669,000, and more than a quarter of the global case count of more than 17.4 million.

Deaths have risen in the US for three weeks in a row, according to a Reuters analysis. Deaths are rising in 26 states, up from 23 last week. New coronavirus cases are rising in 37 states, down from 44 a week ago. As deaths generally lag behind cases, the death toll is expected to continue to rise over the next several weeks at least.

The biggest hotspots remain in Florida, Arizona, California and Texas, while COVID-19 infections appear to be “moving up” from the South into Missouri, Ohio, Kansas, Nebraska, and Kentucky. White House Coronavirus Task Force coordinator Deborah Birx said on Thursday that this shift was “because of vacations and other reasons of travel.” 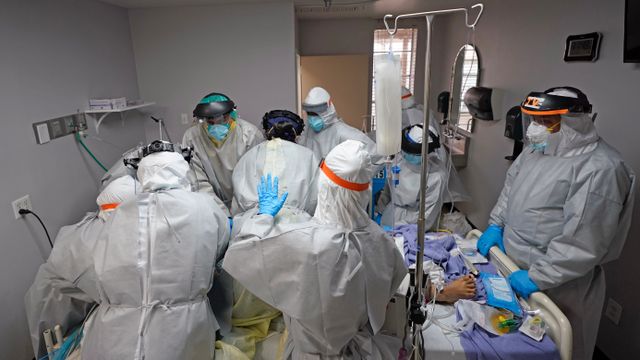 Dr. Joseph Varon, right, leads a team as they try to save the life of a patient unsuccessfully inside the Coronavirus Unit at United Memorial Medical Center earlier this month. (AP Photo/David J. Phillip)

Florida’s Department of Health on Thursday confirmed 9,956 new coronavirus cases, bringing the state’s known total to 461,379. There were 252 reported deaths in the state, breaking a fatality record for the third day in a row, and marking the highest single-day number of deaths since the pandemic began. The statewide death toll now stands at 6,587, the eighth highest in the nation.

Miami-Dade County reported 2,773 additional confirmed COVID-19 cases and 60 new deaths, according to the Department of Health. The county now has 115,916 confirmed cases—4.3 percent of its entire population—and 1,515 deaths.

On Wednesday, Miami-Dade County Public Schools, the state’s largest district, announced it would be resuming classes August 31 with all instruction taking place virtually. In a press release, Miami-Dade Superintendent Alberto Carvalho said the “decision to commence the academic year on the My School Online distance learning platform is representative of our commitment to safeguarding the health and wellbeing of our students and workforce.”

The decision of the school district to begin the school year with all online instruction and no in-person classes runs counter to Governor Ron DeSantis’ order to open all Florida public schools in-person, five days a week. Earlier this month, DeSantis made the absurd claim, “If you can do Home Depots, if you can do Walmart, if you can do these things, we can absolutely do schools.”

As of Thursday morning, there were 8,429 COVID-19 patients admitted to hospitals throughout the state, according to the Florida Agency for Health Care Administration (AHCA). Fifty-one hospitals have run out of beds in the intensive care units (ICUs), and the entire state has only about 1,000 total ICU beds available for treating newly admitted coronavirus patients.

Arizona reported Thursday a record increase of 172 COVID-19-related fatalities, bringing the state’s death toll to 3,626. Identified cases rose to 170,798. The Arizona Department of Health Services reported that 83 percent of inpatient beds and 86 percent of ICU beds were in use, including for people treated for COVID-10 and other patients.

During the past three weeks, COVID-19 cases have increased in Arizona by 52 percent and tests for the virus increased by 40 percent. Known test results from last week show a 12 percent positive rate, an indication that there is not enough broad testing and the virus is widespread. Santa Cruz County, on the Mexican border, has the highest rate of cases in the state.

The Arizona Department of Corrections reported that 840 prisoners had tested positive for COVID-19 as of Wednesday. Six incarcerated people are confirmed to have died of the virus, with another 11 deaths under investigation. Navajo Nation, which included parts of Arizona, New Mexico and Utah, reported 8,968 deaths and 453 confirmed deaths as of Thursday.

Texas confirmed 313 new COVID-19 deaths Wednesday, surpassing the previous one-day record of 197 and bringing the statewide death toll from the virus to 6,190. The state has seen a staggering 4,300 deaths this month alone.

Coronavirus cases in Texas have risen to more than 433,000, putting the state just under the case count in New York, the epicenter of the virus in the early stages of the pandemic. South Texas is still reeling from the impact of Tropical Storm Hanna, which hit the region over the weekend, causing high winds, heavy rain and significant flooding.

The worst hotspot in the state is the Rio Grande Valley, where hospitals began reaching capacity earlier this month. The pandemic is ravaging Hidalgo County. “It’s a tsunami what we’re seeing right now,” Dr. Federico Vallejo, a critical care pulmonologist, told CNN. He said he was treating up to 70 patients per rotation, compared to the usual 15 to 20.

The state of California broke another record on Wednesday, with at least 189 deaths, according to a Los Angeles Times count. This was the second consecutive day, and fourth time this month, that the state broke its single-day death count record.

At least 12,285 new COVID-19 cases were reported in the state Wednesday, also a new single-day record. This surge in deaths and cases comes more than a month after the state began to reopen the economy, the devasting impact of the reopening now being registered.

California has now recorded nearly 9,000 deaths since the pandemic began. Many countries have lower death tolls that the most populous US state, including Japan, with 1,000 deaths, and South Korea with 300. Both countries have populations greater than that of California.

In the Northeastern states, which have seen by far the greatest number of fatalities—New York alone has recorded more than 32,000 COVID-19 deaths—new concerns are being raised.

On Thursday, Mark Levine, chair of the New York City Council health committee, said that cases are rising again in New Jersey, Connecticut and Massachusetts. “Now, for the first time since spring, cases are rising again in all three,” he said. “NY is now an island within an island, with warning signs on all sides.” All three states have carried on with reopening plans despite small, but not insignificant, increases in the reproduction rate of the virus.