New York City Health Commissioner Dr. Oxiris Barbot resigned abruptly on August 4 after months of conflict between her department and Democratic Mayor Bill de Blasio related to the city’s response to the coronavirus pandemic. While conflicts between de Blasio and the Department of Health and Mental Hygiene (DOHMH) have been glaring since May, it appears that the impending reopening of the city’s public schools as soon as September 10 was the final straw that prompted Barbot’s departure, reportedly because she expected to be fired shortly.

In early March, Barbot and other top DOHMH officials were among those urging de Blasio to adopt measures to combat the pandemic earlier and more consistently against the urging of, among others, Dr. Mitchell Katz, CEO of NYC Health + Hospitals (H+H), responsible for the city’s public hospitals. De Blasio apparently retaliated by moving COVID-19 contact tracing from DOHMH—which contact traces for HIV and other communicable diseases—to H+H. 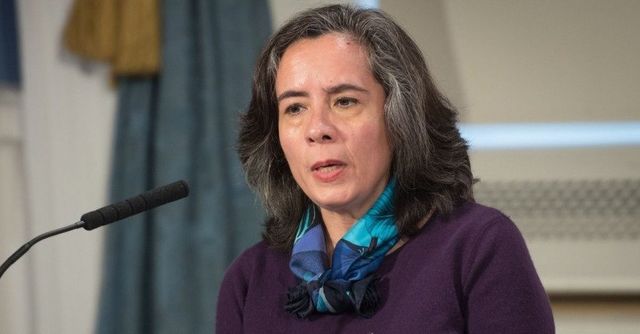 Barbot’s replacement, Dr. David Chokshi, has worked for six years in senior roles at H+H. He has endorsed the reopening of schools, saying that New York City is one of the only places with an infection rate low enough to do so. His new role was announced rapidly, illustrating that Barbot was indeed forced out and did not resign of her own volition.

In point of fact, while new cases in the city are in the low hundreds daily, a far cry from the April 6 peak of 6,377, the proportion of tests coming back positive remains above one percent, and tests still take days to return results. With the pandemic surging nationally and with much of the New York economy reopened, a second wave in the state and city is inevitable, especially if the schools reopen as planned.

Official data for the city indicates 18,938 confirmed COVID-19 deaths and an additional 4,625 probable deaths. The staggering 23,563 total is certainly an undercounting of deaths directly and indirectly caused by the pandemic.

There is every indication that Barbot’s forced departure is an attempt to neuter an agency that has advocated for generally more stringent public health measures than de Blasio, a tool of Wall Street despite his “progressive” posturing, has been willing to adopt. This conflict dates back to before the pandemic, with the mayor and DOHMH squabbling over the 2015 Legionnaires’ disease outbreak in the Bronx.

However, this pales in comparison to the row that began at the beginning of this year. Barbot, who became health commissioner in 2018, and her staff were arguing for the closure of schools and businesses much earlier than the mayor was willing to consider and earlier than their counterparts in H+H were.

As early as March 10, DOHMH officials were urging de Blasio to close the city’s public schools, with some even threatening to resign in the face of the mayor’s intransigence, according to the New York Times.

On the very same day, H+H’s Katz was emailing top mayoral aides recklessly promoting a murderous “herd immunity” approach. He claimed that there was “no proof that closures will help stop the spread,” despite the experience of Hubei Province in China, and worried about the economic impact of any serious public health measures, according to the Times.

He then declared, “We have to accept that unless a vaccine is rapidly developed, large numbers of people will get infected. The good thing is greater than 99 percent will recover without harm. Once people recover, they will have immunity. The immunity will protect the herd.”

This perspective guided the city’s response for the following week, needlessly condemning tens of thousands to an early grave in New York City and in areas across the US where the virus spread from New York.

De Blasio only ended up closing the schools days later above all due to threats of a mass sickout by rank-and-file teachers. At this point, further shutdowns at the city and state levels were inevitable, especially under conditions in which workers nationally were engaged in job actions against the spread of the virus and when the Wall Street bailout had not yet been passed in Congress.

His reluctant coming around to public health measures did not mend the relationship with DOHMH or Barbot. In early May, de Blasio handed control of the city’s COVID-19 contact tracing program to H+H, despite DOHMH overseeing contact tracing measures for other diseases like HIV. Public health experts at the time roundly condemned the decision, and de Blasio officials privately told the media the decision was “outrageous.”

The contact tracing program began, in the understated words of the New York Times, with “a rocky start.” Despite supposedly being chosen because it can rapidly hire people, H+H has outsourced call center management to a subsidiary of UnitedHealth Group, and fewer than half of those contacted have provided the necessary information to contact tracers.

Dr. Neil Vora, director of the contact tracing efforts, admitted in an internal meeting, “Right now, cases are popping up all over the place, and we are not linking them to known contacts except in a small proportion of cases.”

The dirty tricks against Barbot did not end there, however. In particular, this was demonstrated in a confrontation that allegedly occurred in March between Barbot and New York City Police Department Chief of Department Terence Monahan which surfaced later in May.

NYPD officers had been attempting to strong-arm half a million surgical masks from the DOHMH stockpile but were promised a lower amount due to shortage of supplies. Barbot allegedly said, according to the New York Post tabloid, “I don’t give two rats’ asses about your cops.” (NYPD officers have been ostentatiously violating state mandates and departmental policy by eschewing masks, including during the violent crackdown on protests against police violence.)

While no doubt garnering her sympathy among health care workers and workers more broadly in New York City, who loathe and fear the NYPD, the leaking of the conversation sparked a firestorm in the media and among the police, particularly among the fascistic police union officialdom.

At that point, Barbot seemed firmly on the outs, appearing at fewer news conferences, and the Times notes that de Blasio again turned to Katz for advice.

Recent weeks have seen lower-profile friction between de Blasio and DOHMH about how to reopen the schools, including what containment measures are appropriate when a student tests positive.

Barbot’s being forced out occurs during a relative lull in the city’s coronavirus cases, but also at a critical moment which will determine how the next phase of the pandemic will affect the city. With caseloads overwhelming hospital systems across the country, it is only a matter of time before there is a resurgence in New York City, especially within the schools.

As of this writing, the city’s public school district, the largest in the country, is the only district among the six largest in the US preparing to resume in-person instruction at the beginning of the school year. All of the other largest, including Chicago and Miami-Dade, have had to bow to the reality of the expanding pandemic and the immense opposition among educators and parents to the resumption of classes, for at least a few weeks.

However, forcing students back to school is the linchpin of the back-to-work campaign in the US. Millions of workers are unable to return to full-time work if their children are being taught remotely. That such a policy will result in the infection and deaths of an untold number of children, educators, staff and parents, along with an acceleration of the pandemic, is small potatoes to President Donald Trump as well as Democratic officials like de Blasio.

It is under these conditions that Barbot’s position at DOHMH became untenable. For all of de Blasio’s blathering about “teamwork,” his decision was driven by Wall Street’s profit interests.

Thanks to the “herd immunity” position adopted for a few days in the largest city in the country, New York City was the undisputed epicenter of the pandemic globally for weeks. The return to such policies signaled by Barbot’s ouster, on the eve of the return to in-person instruction, will spell an even worse bloodbath, unless halted by the independent action of the working class, guided by a socialist program.