Biden’s blueprint for a right-wing presidency: Part one

This is the first part of a two-part article. The second part will be posted Tuesday, August 11.

The next milestones in the 2020 elections are fast approaching, with presumptive Democratic presidential nominee Joe Biden to name his running mate this week, the Democratic National Convention opening next Monday and the Republican convention the week after.

This is an appropriate occasion to review the political program advanced by Biden, and rebut the incessant claims by the media that the Democratic nominee, and the party as a whole, have moved to the left and that there exist wide, even unbridgeable differences between the Democrats and Republicans on virtually every significant political issue.

Since the contest for the Democratic presidential nomination ended in March, with the decision of Vermont Senator Bernie Sanders to quit the race and endorse the former vice president, the claims of a “shift to the left” by the Democrats have become a media drumbeat.

These claims are usually coupled with suggestions that Sanders exerted political pressure through joint committees set up by the Biden campaign to cover six major areas, including climate change, criminal justice reform, education, health care, immigration and the economy. 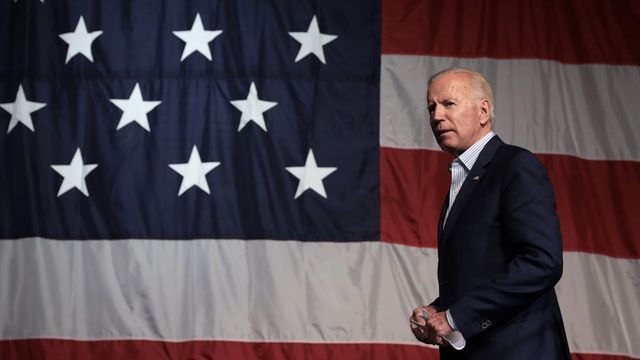 The conclusions of these committees—each staffed by five Biden representatives and three Sanders representatives—have been submitted to the platform committee for the Democratic National Convention and an 80-page draft platform assembled, made public July 21.

While the Biden campaign flatly rebuffed some of the signature proposals of Sanders and Senator Elizabeth Warren—no “Medicare for all” and no “Green New Deal,” for example—there were concessions made in terms of incorporating language and even some specific policies in areas like forgiveness of student loan debt.

But the effort to promote this process, both by Sanders himself and his pseudo-left apologists, has obscured a more fundamental feature of the emerging Biden campaign: its complete subordination to corporate America and to the demands of the military-intelligence apparatus.

This has not involved any internal reorientation for the candidate himself. On the contrary, Biden is a deeply reactionary figure who personifies the role of the Democratic Party as a venue for Wall Street and the CIA to reach agreement on the next steps for American imperialism.

It was only a year ago that Biden was caught on tape reassuring wealthy donors at a fundraising event in Manhattan, “No one’s standard of living will change, nothing would fundamentally change” if he won the Democratic nomination, defeated Trump in 2020 and was sworn in as president in January 2021.

Throughout the Democratic presidential primary contest, Biden campaigned as the candidate who would restore what he called a “normal America,” i.e., America as it was under the administration that preceded Trump, with Barack Obama as president and himself as vice president.

This theme is underscored in the draft Democratic Party platform, which refers to the “Obama-Biden Administration” a dozen times, always in the most flattering terms, and presents a picture of American life in the years 2009-2016 that is unrecognizable to anyone who actually lived through this period of deep economic crisis, endless austerity and wage-cutting, and continuing wars and other imperialist atrocities.

The harking back to the halcyon days of Obama-Biden leaves out one overriding political question: If the Democratic administration was such a success, how was it possible for the Republicans to take control of Congress—the House of Representatives in 2010, then the Senate in 2014—and finally win the White House under Trump in 2016?

We shall return to that question later on.

The Democratic draft platform is perhaps most remarkable for what it avoids rather that what it discusses. The word “capitalism,” for example, does not appear in the 80-page draft. There is no reference to the 2008 financial crash, to the bailout of Wall Street, to the forced bankruptcy of the auto industry and the cutting of wages for newly hired workers by 50 percent, or to the protracted stagnation in jobs and living standards, all hallmarks of the “Obama-Biden administration.”

In the arena of “Obama-Biden” foreign policy, there is no mention of drone missile strikes or assassinations, the US-NATO war on Libya, the US encouragement of the Saudi war in Yemen, Obama’s “pivot to Asia,” involving the deployment of US warships and warplanes against China, the US-backed coup in Honduras, or the US-backed coup in Ukraine, spearheaded by fascists and anti-Semites.

Much of the platform consists of liberal-sounding boilerplate about economic and social justice, expanded access to health care, saving the environment and restoring an “economy that works for everyone” (a rhetorical tip of the hat to Sanders here). But the actual proposals are far more modest than Sanders’ demagogy: a $15-an-hour minimum wage; a public option to be added to the Affordable Care Act; making sure “investors pay the same tax rates as workers,” (not exactly a radical redistribution of wealth); rejoining the Paris Accord on global warming, a purely cosmetic gesture; and some forgiveness on student loan debts after borrowers have made payments for 20 years (half their working life!)

The platform begins with a brief section on the coronavirus pandemic, the overriding public health and social issue confronting the entire population of the country. This perfunctory passage says nothing about the campaign to force workers back to their jobs in unsafe workplaces, or the reopening of the schools. It does not advocate any new lockdown or other emergency action to save the millions of lives now threatened.

The language is peculiarly out of touch with the real conditions facing working people. “In states and cities across the country, too many parents are being forced to choose between keeping their jobs and keeping their children safe,” the platform reads, offering expanded child care as a solution. Actually, workers are concerned that it is their jobs that are putting their lives and the lives of their children in danger.

The grand total of four pages on the coronavirus is dwarfed by subsequent passages elaborating on measures to build up the fortunes of minority and female entrepreneurs, which is a veritable obsession of the platform.

When Marxists characterize identity politics as the politics of the black, Hispanic and female petty-bourgeoisie, this is not just a phrase, but a sociological reality: the Democratic platform calls on the government to “equalize established pathways for building wealth” for individuals from these social groups, and develop “policies that provide seed capital in order to access the economic security of asset ownership.”

In class terms, the Democratic Party does not seek to reduce the class wealth gap, the yawning social gulf between the multimillionaires and billionaires at the top of society and everybody else. It aims only to “close the racial wealth gap,” in other words, to bring a thin layer of blacks, Hispanics and women into the privileged upper class, where they can join in the exploitation of the entire working class, black, white, Hispanic and immigrant.

Biden indulges in a bit of anti-Wall Street rhetoric from time to time, but always within careful limits, and always with a nod and a wink to his real constituency, the super-rich, to let them know that this is just election-year demagogy that will have no real consequences.

In May, as trillions in federal relief funds flowed to Wall Street and corporate America, the Biden campaign criticized the Trump administration for “carrying out what is now the largest corporate bailout in American history in a way that is systematically rigged in favor of big businesses, the wealthy, and the financial sector—and against the working people and middle class families.”

This was an apt enough description, but the statement did not acknowledge that the CARES Act, which funded the bailout, was passed 96-0 by the Senate and by a voice vote in the Democratic-controlled House. Biden later told a group of wealthy backers that as a result of the popular backlash against the bailout there would have to be some financial sector reforms, and that he would “look at the institutional changes we can make, without us becoming a ‘socialist country’ or any of that malarkey.”

Other domestic policy proposals combine the most meager possible reform proposals with an occasional pie-in-the-sky promise (presumably drawn from the Sanders-Warren camp) that no one in the Biden campaign or the congressional Democratic leadership takes seriously.

Thus, the section on poverty fulminates, “In the wealthiest country on earth, it is a moral abomination that any child could ever go to bed hungry.” True enough, but then why did the Obama-Biden administration cut food stamps? Biden now promises to increase benefits, and to “remove barriers that keep the formerly incarcerated from accessing food assistance.” Don’t starve those just released from prison: What a monument to Democratic Party generosity!

The health care section pledges to “build a health care system that is driven by the needs of patients and the people who care for them, instead of the profit motives of corporations.” However, Biden proposes to leave these profit-seeking corporations—drug companies, hospital chains, equipment manufacturers, insurance companies—in charge of the provision of health care. The platform adds, “Democrats will fight any efforts to cut Medicare benefits, and support finding financially sustainable policies [my emphasis—PM] to expand Medicare to cover dental, vision and hearing.” In other words, when pigs fly.

One of the grosser hypocrisies of the platform is a brief declaration on press freedom: “Democrats roundly reject President Trump’s denigration of the free and independent press, which has endangered reporters’ lives, helped fuel conspiracy theories, and deepened distrust between Americans and their government.” But it was the Obama administration that prosecuted more journalists and whistleblowers than any other US government in history, including jailing Chelsea Manning and initiating the campaign against Julian Assange and WikiLeaks.

On immigration, the Democratic platform speaks of “righting the wrongs of the Trump administration.” Presumably this language was chosen to avoid discussing the “wrongs of the Obama-Biden administration,” which deported more undocumented workers than any previous administration and pioneered the methods—internment camps, separation of parents and children—that Trump has developed full blast.

Biden calls for reforming the leadership and training of Immigration and Customs Enforcement and Customs and Border Protection, i.e., not for their abolition, not even the abolition of the BORTAC special forces unit unleashed in the city of Portland last month.

“There will not be another foot of wall constructed on my administration, number one,” he said. Then he declared his support for using surveillance technology instead of a physical wall. “I’m going to make sure that we have border protection, but it’s going to be based on making sure that we use high tech capacity to deal with it. And at the ports of entry—that's where all the bad stuff is happening.”