The debut of Coriky, a new band featuring members of Fugazi and The Evens

Based on this musical pedigree, there was ample reason to anticipate this release. Fugazi was one of the more serious and consistently engaging bands to emerge in the mid-1980s. They became popular in part because of their steadfast opposition to official political and social conformity, but also because of their inventive musicality and dramatic live shows. 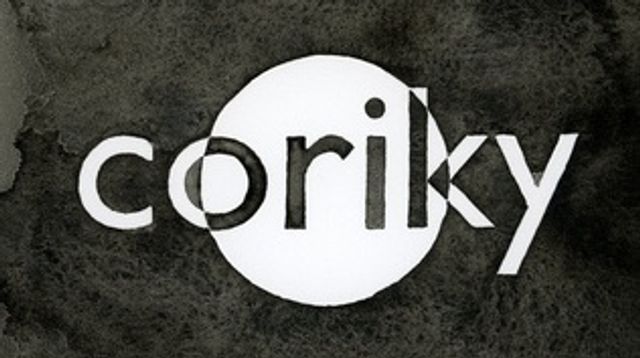 Much of Fugazi’s appeal is captured in the 1996 documentary Instrument (directed by Jem Cohen), which includes exciting concert footage of their 1988 anthem “Waiting Room” and several other performances. Fugazi’s intriguing last album The Argument was released in late 2001 as a self-described “anti-war manifesto” and was well received before the band quietly went on indefinite hiatus.

MacKaye, in particular, has a long history in independent music. Sometimes described as the “godfather” of the “do-it-yourself (DIY) indie-music ethos,” he was the leader of hardcore punk band Minor Threat in the early 1980s and a founder of the renowned indie record label Dischord.

The new album Coriky continues certain musical threads found in both Fugazi and The Evens. In some ways the current album is a notable musical development upon The Evens’ previous recordings. Lally’s rhythmic bass playing adds a more melodic element to the overall direction, contributing hard-driving riffs, dub and reggae-influenced buoyancy, along with an invigorating interplay with both MacKaye and Farina.

The latter two are inventive and supportive in their musicality. MacKaye’s sturdy guitar playing and Farina’s sense of dramatic restraint on the drums aid the overall mix of interesting contrasts—from meditative blues and funk rhythms to experimental forms of hard-charging rock and punk-driven riffs. There is a sharp musical chemistry between all three players for most of the album.

Many individual songs also travel in at least three or four different musical trajectories, often pivoting unexpectedly at a certain point, but not in a way that becomes jarring or distracting. To their credit, and in keeping with prior output, the musicians tend to avoid repetitive and predictable progressions.

Quiet beginnings sometimes finish in loud and rising crescendos, as on songs like “Inauguration Day” and “Shedileebop.” The tracks “Last Thing” and “Woulda Coulda” exude a bluesy, creeping sense of foreboding, persistently feeling like they are about to boil over into something more dangerous. There is a pervasive start-and-stop element to song structures, keeping both band and listener on their toes. 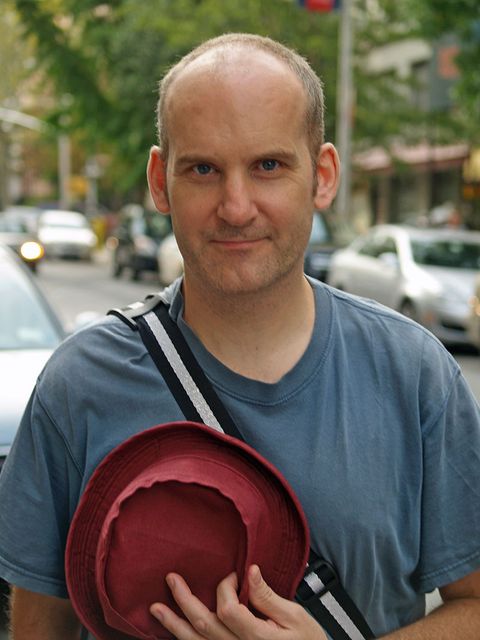 Neither MacKaye nor Farina have particularly polished singing voices, but they make good use of what they have. Lally provides helpful backing vocals as well. MacKaye, with his raw and aggressive approach to singing, favors anthem-like choruses and dramatic shifts in tone. As was true in his time with Fugazi, when he was partnered with singer Guy Picciotto, MacKaye’s voice can be an effective counterpoint to a lighter voice such as Farina’s.

Substantively, the album distributes a considerable amount of opposition and anger across 11 songs. The results are uneven.

The most successful song is “Clean Kill.” Sung from the perspective of a predator drone operator in the US military, “Clean Kill” starts quietly, underscoring the eerily mundane process of taking part in targeted drone attacks on a regular basis from a remote military facility: “She rinsed out her cup/When the next shift showed up/Her replacement asked her ‘what’s been going on?’/She said, ‘not very much’/But she’d seen a lot of action/Oh the terrible things she’s seen/On her screen.”

The refrain “It’s a clean kill/But it’s not clean” is a rebuke of the US military’s Orwellian term for its criminal program of targeted drone assassinations, where alleged “enemy combatants” in other countries are murdered by drone bombs sent from operators thousands of miles away. Killings are considered “clean” by the military if they do not also kill additional unintended targets, which is rarely ever the case. Untold thousands of civilians in Afghanistan, Yemen, Pakistan and elsewhere have been slaughtered in drone attacks. (See also the review of Good Kill, directed by Andrew Niccol).

“Clean Kill” turns sharply as the drone operator steps outside of her facility and looks to the sky. It becomes clear that the “fatal stare somewhere up there” will take aim at her as well in its own way. The outgoing Macbeth-like chorus leaves a grinding musical imprint, sung almost as an anthem: “It’s not enough soap and water/Never enough soap and water.”

There are other affective songs on the album in this vein, such as “Inauguration Day” with its dramatic chorus-driven nod to the popular protests that emerged in the aftermath of the coming to power of the Trump administration: “There’s some people here to see you/I don’t think/They agree with you/One hundred thousand strong/Standing out on the lawn.” 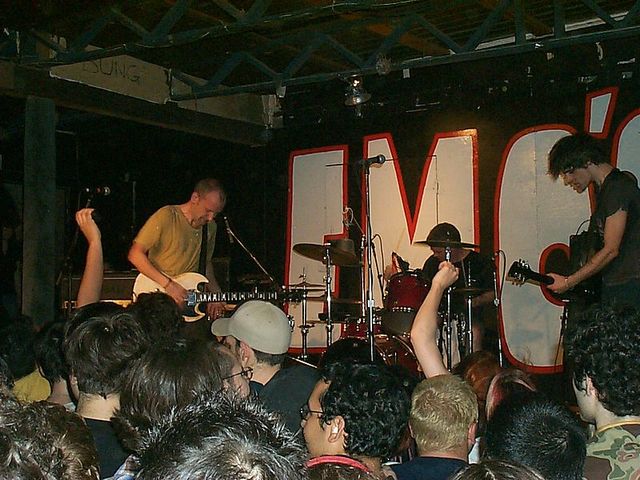 The steadily creeping “Last Thing” also makes an impression, essentially done from the cynical perspective of political leaders who drive workers into war, using economic desperation as a fulcrum, among other things [“Last thing we ever wanted was a war/But we found it much too easy … All the pennies, hammered into swords/And the penniless, that they’re pointing towards…”].

On the other hand, several songs fail to leave much of a lasting impression, even if the music initially grabs the ear. A few issues emerge in this regard.

MacKaye and Farina tend to project cynicism and fatalism onto some of their music and the characters that occupy their lyrics. Their criticism of conformity and various kinds of “sell-outs” too often revolves around questions of personal choice and morality. MacKaye and Farina drill down into the personalities they hold in such contempt without ever quite understanding those personalities in their full social dimensions.

On “Hard to Explain” MacKaye builds the song around a conversation with a person—perhaps someone he knew from his early days in the hardcore punk music scene—who abandons a more principled way of life to pursue a superficial and self-interested path [“Did what you wanted, did what you pleased/All that doing, left you diseased … You found a purpose, that’s good for you/You found a leader, and a politic too/Say you’ve got the answer, I don’t agree…”].

Facing a crisis later in life, the foil of “Hard to Explain” is unable to find a way out. They “speak in circles, no end in sight.”

In another song, “BQM,” MacKaye speaks of a person, or type of person, who is “beginning to question their motives.” But the character is too far submerged in despondency or apathy to care about doing something about this crisis of conscience [“The current current is over my head/Why do I breathe so well underwater?”].

Other songs like “Have a Cup of Tea,” “Too Many Husbands,” and “Woulda Coulda” evoke similar themes and personality types. They are generally unconvincing in their indictments. While understandably resentful of much that is rotten, superficial and oppressive in official life, MacKaye and Coriky are never quite able to get beyond the level of pure or personal resentment.

To combat the “sell-outs” denounced in their music, MacKaye, Lally and the other members of Fugazi, famously developed a rigorous band “ethic” of never buying-in in the first place.

An interesting book by Michael Azerrad, Our Band Could Be Your Life: Scenes From The American Indie Underground, 1981-1991, captures what is sometimes called MacKaye’s “DIY ethic” in great detail in the chapters on Fugazi and Minor Threat: their concerts were always at all-ages venues, they never charged more than $5 for anyone to attend, they never signed a record contract or employed legal middle men of any kind, they hand-pressed and distributed all records from the “Dischord house” in D.C., no interviews were given to corporate magazines and newspapers, all members were vegetarians and did not drink alcohol, and all were dedicated to promoting D.C.-area bands and building up the regional “scene” instead of moving to a larger “cultural capital” in the US.

MacKaye has previously commented that “to exist independent of the mainstream is a political feat in my opinion.” However appealing this supposedly incorruptible stance may first appear, the effort to create a political-moral oasis (or cocoon) outside of the “mainstream” has possibly inhibited rather than encouraged the artistic development of these otherwise talented musicians.

The weaker songs referenced above are weak because the band members have not wrestled with the complex social questions and contradictions which are the real stuff of the conformists and right-wing figures they criticize. What is going on in America more broadly that encourages this kind of thing? When it is stuck at the level of abstract moralizing, the band’s music becomes overly pedagogical or preachy and, at worst, adolescent in character. The more concrete the music and the people dwelling within it become, as on “Clean Kill,” the better it tends to be.

Despite the limitations and the uneven quality of the album, Coriky’s best music is worth listening to and engaging with. In its disdain for complacency and conformity, and particularly in the musicality of the album itself, it is a musical experience more alive than most at present.