Nine major Silicon Valley technology corporations issued a joint statement coming out of their meeting on Wednesday with US government law enforcement and national security agencies in advance of the presidential elections in November.

The statement said: “For the past several years, we have worked closely to counter information operations across our platforms. In preparation for the upcoming election, we regularly meet to discuss trends with US government agencies tasked with protecting the integrity of the election. We held the latest in a series of meetings with government partners today where we each provided updates on what we’re seeing on our respective platforms and what we expect to see in the coming months. Specifically, we discussed preparations for the upcoming conventions and scenario planning related to election results. We will continue to stay vigilant on these issues and meet regularly ahead of the November elections.” 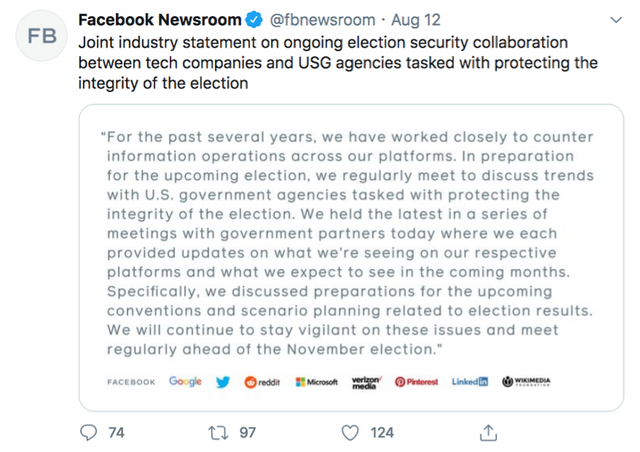 Joint industry statement on the collaboration of big tech with the US government during the 2020 elections published by Facebook.

In the case of Facebook, for example, the joint statement was issued through the company’s Newsroom Twitter feed and said, “Joint industry statement on ongoing election security collaboration between tech companies and USG agencies tasked with protecting the integrity of the election.”

The New York Times reported the meeting and joint statement with enthusiasm, writing, “The group, which is seeking to prevent the kind of online meddling and foreign interference that sullied the 2016 presidential election,” adding that the group “met on Wednesday with representatives from agencies like the F.B.I., the Office of the Director of National Intelligence and the Department of Homeland Security to share insights about disinformation campaigns and emerging deceptive behavior across their services.”

The Times report also said that the meeting included representatives from the Cybersecurity and Infrastructure Security Agency (CISA) and the Department of Justice’s National Security Division. The CISA was created in 2018 by the Trump administration following the near-unanimous bipartisan passage of the Cybersecurity and Infrastructure Security Agency Act by Congress.

Although the meeting and joint industry statement were widely reported, attempts by news media to obtain statements from the participating companies and government agencies have produced nothing but silence. The names of the individuals who attended the meeting have not been released. No details about the meeting—the agenda, the topics of discussion, the planning initiatives, the action items—have been published.

The lack of any information about a meeting between the most powerful internet and social media corporations in the world and US domestic and foreign police agencies, that was held ostensibly to “secure the US elections,” was not lost on some in the corporate media.

Shoshana Wodinsky, of Gizmodo, wrote on Thursday morning: “If the American public is expected to make an informed decision—or hell, any decision—about where to put their votes come November, then we need more information and transparency right now, not less and not later. We need some sort of window behind the scenes to know who’s doing what (and how), so we can have any hope of navigating the information hellscape.”

Although Wodinsky accepts uncritically the unsubstantiated assertions of the US political establishment and intelligence state about “Russian election interference”—which have been repeated incessantly by the New York Times since 2016 as established facts—she is raising an important question: Why should the public think that the secret collaboration of big tech with the US government before the 2020 presidential elections will yield anything other than a “meddling” and “misinformation” campaign of their own in the form of online censorship?

Direct collaboration between the top tech companies and the US government began in the lead-up to the 2018 midterm elections. A meeting was held on May 23, 2018 at Facebook headquarters in Menlo Park, California to “ensure that the midterms were not a repeat of the Russian interference in 2016.” The meeting was attended by representatives from Amazon, Apple, Google, Microsoft, Oath, Snap and Twitter along with Christopher Krebs—who was at the time the undersecretary of DHS—and officials of the FBI’s “foreign influence” task force.

A second meeting at Facebook headquarters took place on September 4, 2019, that included representatives from Google, Twitter and Microsoft and the FBI, the Office of the Director of National Intelligence and the Department of Homeland Security. This daylong meeting was specifically called to prepare for the 2020 elections.

As the crisis of the pandemic was beginning to spread across the US, the joint industry group held an emergency meeting at the White House on March 11 to “stop misinformation” about the coronavirus. This meeting included representatives of Google, Amazon, Apple, Cisco, Facebook, IBM, Microsoft, TechNet and Twitter with US Chief Technology Officer Michael Kratsios.

Following each of these meetings, both government agency and tech company officials refused to respond to any questions or provide details of the discussions. After the session in 2019, Joan Donovan, a research director at Harvard University’s Shorenstein Center, said the public should also be concerned about the collaboration of government agencies with tech giants for privacy reasons. “We don’t know where the lines are drawn internally,” she said. “We don’t know whether the tech companies would consider your inbox or direct messages subject to sharing with the state.”

The collaboration of big tech with the agencies of the US security state takes many forms. Among the most important of these is the provision of advanced systems for the Pentagon in the development of artificial intelligence and machine learning for the killing machines of modern imperialist warfare.

As the corporate leadership of big tech moves to integrate itself further and deeper with the US state apparatus, the workers within these companies have increasingly opposed this collaboration. Google employees organized a campaign in 2018 that forced the company to discontinue its work on the Pentagon’s Project Maven for artificial intelligence implementation in drone warfare.

In January of this year, Amazon workers defied corporate communications directives and spoke out openly against the company’s collaboration with President Donald Trump and the DHS and ICE assault on immigrants within the US.

Lest anyone in the US government might think that Amazon CEO Jeff Bezos held any sympathies for the sentiments of his employees, the world’s richest individual embraced the US Department of Defense in an appearance at a national defense forum in California last December.

Discussing the political movement and organizing among Amazon employees, Bezos said, “One of the things that's happening inside technology companies is there are groups of employees who, for example, think that technology companies should not work with the Department of Defense… I think it’s a really important issue, and people are entitled to their opinions, but it is the job of a senior leadership team to say no.”

Bezos went on, “My view is if big tech is going to turn their backs on the Department of Defense, this country is in trouble. That just can't happen.”

Behind the collaboration of big tech with government agencies in the 2020 elections are concerns that the working class, in the midst of the economic and social crisis triggered by the pandemic, will engage in mass struggles that will erupt independently of the two-party system. There is unanimity within both parties and the campaigns of both the Democrats and President Trump in cooperation with the tech monopolies that everything must be done to block the ideas of socialist internationalism and the program advanced only by the Socialist Equality Party in the elections from intersecting with the growing class struggle.