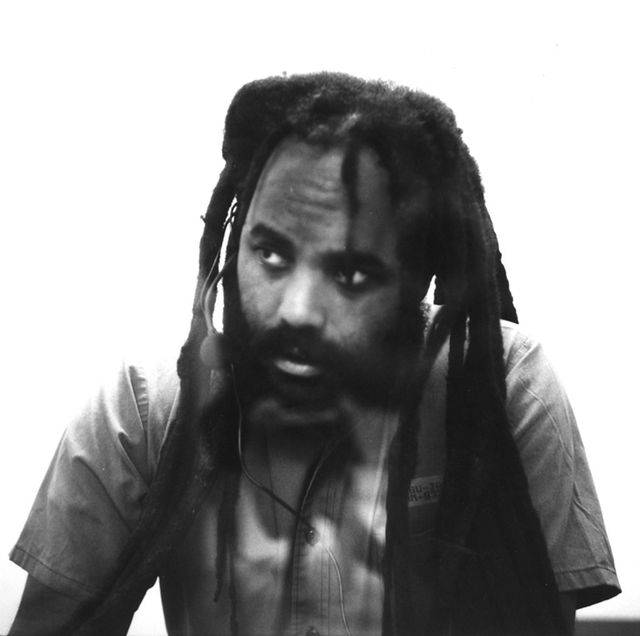 Mumia Abu-Jamal, the former Black Panther and broadcast journalist who had been on Pennsylvania’s death row for over 13 years, narrowly escaped an execution scheduled for August 17, 1995 when his trial judge granted a stay.

Abu-Jamal was convicted in the 1982 shooting death of Philadelphia police officer Daniel Faulkner. The stay, granted by Judge Albert Sabo of Common Pleas Court, came in the midst of a hearing on Abu-Jamal’s motion for a new trial. Sabo also presided at the original trial and had handed down more death penalty sentences than any other sitting judge in the country at that time.

The case against Abu-Jamal was riddled with inconsistencies and signs of a frame-up from the beginning, including the testimony of two witnesses who testified that they saw the shooting of the police officer, and that the perpetrator was not Abu-Jamal.

Abu-Jamal was in fact targeted by the authorities, and the notoriously brutal Philadelphia police department, because of his political activity. He was a prominent supporter of the black nationalist MOVE organization, the object of a campaign of state repression which culminated in the 1985 bombing of MOVE headquarters. This atrocity killed defenseless men, women and children and destroyed dozens of homes in the surrounding west Philadelphia neighborhood.

Abu-Jamal, now 63 years old, has spent well over half his life behind bars following the conviction, which Amnesty International—among various other advocates and observers—charged was tainted by unfairness and racial bias. In 2011, he was sentenced to life imprisonment without parole. In 2018, in a significant legal victory for him, a ruling by a Pennsylvania Superior Court judge gave him a chance to appeal the conviction. Over the years, attorneys have brought forward evidence of many instances of flagrant misconduct in the case, including bias by Sabo. They have pointed to the exclusion of exculpatory eye-witness testimony and fabricated confessions.

Abu-Jamal has steadfastly maintained his innocence throughout his trial. During his imprisonment, he has continued to speak from behind bars on Prison Radio, as well as writing books, including Live From Death Row in 1995. 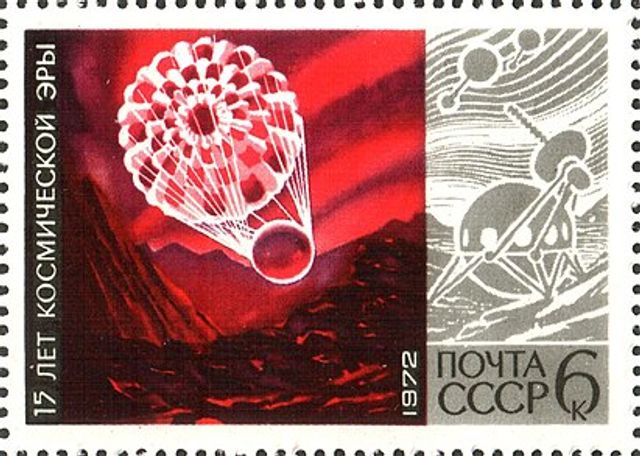 On August 17, 1970 the Soviet Union launched the Venera 7 unmanned space probe to the planet Venus. Venera 7 was one of several Soviet probes sent to Venus but was the first to make a successful soft landing making it possible to send data back to scientists on Earth. Earlier attempts by Soviet craft were crushed by the intense pressure shortly after entering Venus’ atmosphere.

Venera 7’s trip to the second planet from the Sun would last for 120 days, reaching the atmosphere of Venus on December 15, 1970. Once inside, the probe began a descent to the surface of the planet. Despite a failure in the parachute that caused Venera to impact the surface at a higher speed than planned, which turned the antenna away from earth, the probe still transmitted useful data for 53 minutes.

Scientists learned that the surface temperature of Venus was 475 °C (887 °F). Using this data and readings of the atmosphere, a surface pressure of 9.0 MPa (1,300 psi) was calculated on the planet. Although already suspected, the probe confirmed that there is no potential for human life to survive on Venus. The mission also confirmed that the planet could not hold any water in liquid form.

Between 1970 and 1985 the Soviet Venera missions would land a total of 10 probes on the surface of Venus. Notably in 1975 Venera 9 would send the first images from another planet’s surface and in 1983 Venera 15 would use radar to make high-resolution mapping scans of the planet.

The landing on the planet was essential for collecting concrete information about earth’s closest neighbor. Until the Venera 7 landing the only information available came from images taken from probes flying thousands of miles from the planet’s surface. At the time, the closest US probe to Venus was only able to pass within 2,400 miles. These missions were unable to provide any information about the surface of the planet since it is constantly surrounded by thick walls of clouds. 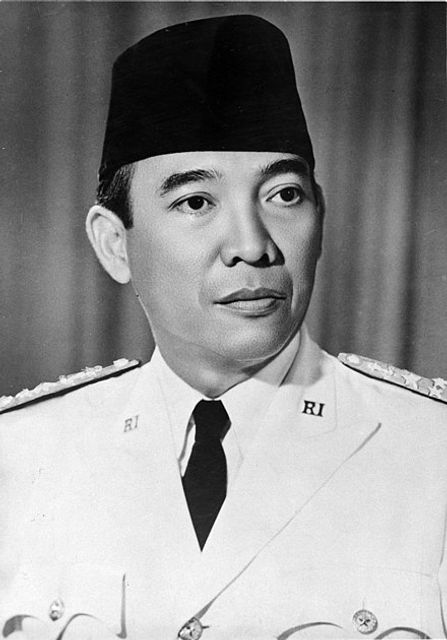 On August 17, 1945, nationalist leaders in Indonesia issued a proclamation of independence, as Japan, which had occupied the sprawling archipelago for three years during WWII, suffered a decisive defeat at the hands of the Allied powers.

The declaration of independence was issued just a week after the Japanese imperial regime had announced that it would surrender to the United States. Already facing a crippled civilian and military infrastructure, as a result of over a year of Allied air raids, at the beginning of August Japan was hit by the first nuclear attack in history when the US detonated atomic weapons over Hiroshima and Nagasaki, killing hundreds of thousands.

Japanese forces had, over the preceding year, suffered a series of major defeats throughout southeast Asia, including in the Philippines, which signaled that its imperial ambitions in the region, its so-called “Greater East Asia Co-Prosperity Sphere,” had been thwarted.

In the space of three months, Japanese military forces occupied Indonesia in March 1942, defeating the Dutch who had ruled the archipelago. The Dutch state and military administration, having previously preoccupied itself primarily with the repression of Indonesian opposition, was ill-equipped for an assault by a major army and was cut off from supplies and reinforcements from the Netherlands, which had been overrun by Nazi Germany.

A number of nationalist Indonesian leaders, including Sukarno and Mohammad Hatta, collaborated with the Japanese. Hostile to the independent mobilization of the working class and peasantry, they viewed the Japanese ouster of the Dutch, who had pillaged Indonesia for centuries, as a potential boon to the cause of bourgeois national independence and their own exploitation of the island’s impoverished masses.

Over the course of the three years of Japanese occupation, opposition from below grew, registered in several significant strikes, along with peasant disturbances and protest movements. In September 1944, Japanese Prime Minister Kuniaki Koiso, fearful of the developing movement and facing the prospect of military defeat to the Allies, promised to grant Indonesia independence at an unspecified point in the future.

The August 1945 declaration was agitated for by nationalist forces to the left of Sukarno and Hatta, who were fearful that some accommodation would be made to renewed Dutch occupation. Signed by both men on behalf of the “people of Indonesia,” it declared simply that “We the people of Indonesia hereby declare the independence of Indonesia. Matters which concern the transfer of power, etc., will be executed by careful means and in the shortest possible time.” 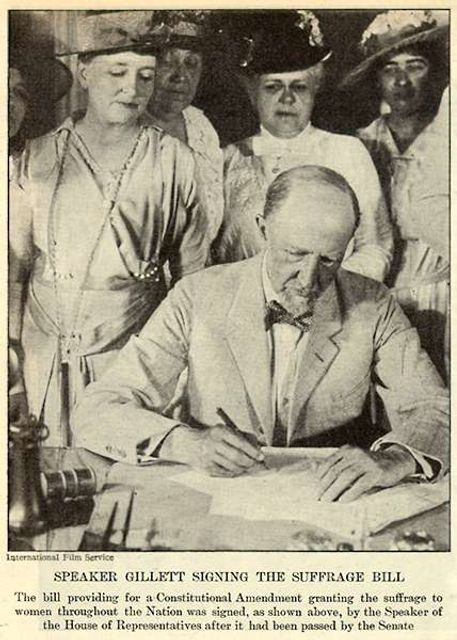 On August 18, 1920, by a vote of 50-46, the state legislature of Tennessee ratified the 19th Amendment to the Constitution, which gave women 21 years or older the right to vote in local, state, and federal elections. It became the 36th state to pass the amendment, reaching the two-thirds majority of states necessary to pass the amendment.

The amendment became law on August 26, 1920, enabling 26 million women to vote in the presidential election of 1920.

The struggle for women’s suffrage began in earnest in the US in the decade leading up to the Civil War, when the development of the struggle against slavery raised broad demands for equality.

The critical factor, however, in the achievement of women’s suffrage was the emergence of international socialism and the explosive growth of the class struggle in the late 19th century and early 20th century, and especially the Russian Revolution of 1917. In the United States, major industrial struggles of women workers were led by socialists in the textile and garment industries, sharpening calls for equality. Meanwhile, bourgeois feminists argued that they more rightly deserved the vote than propertyless, working-class men.

In Russia, the overthrow of the Tsar in March 1917 was led by women textile workers. It was in the political hothouse of the revolutionary month of July of that year that the bourgeois Provisional Government was forced to grant women the right to vote. But it was the new Soviet state created by the October Revolution that not only granted women the right to vote, but passed a whole slew of legal and social reforms that elevated women’s equality with men, including the legalization of abortion in 1920.

It was only in the years following the Russian Revolution that witnessed the extension of the right to vote to women in the United States, as well as Britain (1918 and 1928) Germany (1918), and the Netherlands (1919).