An online appeal for public assistance to fund the legal defence of Julian Assange has won significant support. In the space of a few days, hundreds of people from around the world have signalled their opposition to the attempted US prosecution of the WikiLeaks founder for his exposures of American war crimes.

The crowdfunding effort was launched last Thursday by Stella Morris, Assange’s partner and the mother of his two young children. The initial target of £25,000 was surpassed within some 48 hours and the fundraiser appears set to exceed its revised goal of £50,000. 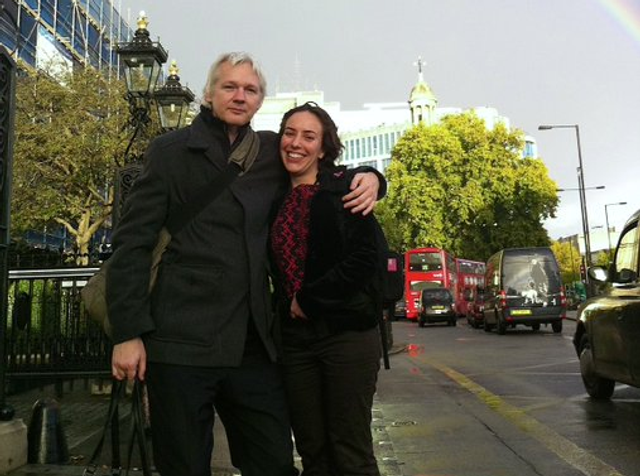 An image of Assange with Morris used to promote the fundraiser

The response is further evidence of the broad international support for Assange among workers, students, young people and intellectuals which finds no expression within the official political parties in the US, Britain and Australia, or in the corporate media.

It also testifies to the manner in which the British and US authorities have run roughshod over legal norms in a bid to prevent any challenge to their attempt to destroy the WikiLeaks founder. Violations of Assange’s legal and democratic rights have blocked him from participating in his own defence, and the costs associated with challenging them are substantial.

In the statement announcing the appeal, Morris, who is herself an internationally-respected human rights attorney, summed up the issues of law and democratic principles at stake in Assange’s threatened extradition from Britain to the US.

Morris began by pointing to the politically-motivated and illegitimate character of the 18 US charges against Assange, 17 of them under the US Espionage Act.

Assange’s “crime,” Morris wrote, “is to have reported on matters the US would rather have kept hidden from view. He helped expose war crimes and human rights abuses. He revealed the killing of unarmed civilians and the torture of innocent people. No-one has been held responsible for the serious crimes Julian has exposed. If he, an Australian citizen living in the UK, can be successfully prosecuted, so too can journalists and publications everywhere.”

She elaborated on the broader implications of the attempt to prosecute Assange for lawful publishing activities.

From 2010 to 2017, the US administration of President Barack Obama ruthlessly persecuted Assange and impanelled a secret Grand Jury to concoct charges against him.

The Obama administration however, apparently concluded that prosecuting the WikiLeaks founder would be politically inexpedient and could trigger a constitutional crisis because it would mean that “every newspaper publishing the same data should be prosecuted too.”

The Trump administration “from the outset” had “targeted” Assange and “charged him under US laws which date back 100 years, during which time they have never been used to prosecute any publisher or journalist. The US legislation allows for no defence of public interest.”

Morris said this was inseparable from the broader authoritarian agenda of the Trump administration, writing: “The politics of the intention are clear; brought by an administration that refers to the press and whistleblowers as the ‘enemy’ and news of importance as ‘fake’.”

Morris reviewed some of the attacks on Assange’s rights by the British and US authorities. Throughout the COVID-19 pandemic, Assange had been confined to his cell for at least 23 hours per day, without visits, including from his family.

A few weeks out from final extradition hearings, set to begin on September 7, the US issued a new superseding indictment, over a year after it was required to submit its final charge sheet.

As the WSWS has documented, the superseding indictment contains no new charges or evidence. The additional material is substantially based upon the testimony of two US Federal Bureau of Investigations informants, one of whom has previously been convicted of impersonating Assange and stealing tens of thousands of dollars from WikiLeaks.

The new indictment extends the assault on press freedom, presenting WikiLeaks’ assistance to NSA whistleblower Edward Snowden as illegitimate and raising the prospect of a broader US dragnet against other members of the publishing organisation.

A WSWS perspective last week noted that the late filing of the new indictment confronted Assange’s legal team with the impossible “choice of whether to accept the further sabotage of their client’s case” by proceeding with the September hearings “or prolong the endangerment of his life with more months in prison” through an appeal for a delay.

In a blatant legal abuse, the WikiLeaks founder has still not been rearrested on the basis of the superseding indictment, so he is being held in Belmarsh Prison on a lapsed charge sheet.

Morris outlined the “vast undertaking” faced by Assange’s defence. “Investigating and understanding the detail, even before the threatened new indictment, is like climbing the Himalayas whilst the person most able to contribute is locked in a prison—and disabled, mentally and physically, from the level of engagement he wants and needs to give,” she wrote.

Morris noted that while Assange’s defenders were receiving minimum remuneration or working pro bono, the “sheer volume and range of work required, means that we need to continue to raise funds to cover the mounting costs,” which had exceeded £500,000 already.

Appealing for public assistance to meet the challenge, she concluded: “We all recognise the responsibility placed upon us, and what is at stake, and express our gratitude to anyone who feels able to contribute.”

As of this writing, 940 people had pledged a combined £41,972. A substantial proportion appears to have been raised from small donations of less than £50, indicating the involvement of working people.

Comments from some donors point to the sentiments that underlie the support for Assange.

One wrote: “Julian Assange is the canary in the coalmine of the ever growing dystopian nature of governance around the world. If we can save him, we may still have a chance to turn things around. Investigative journalism must not become a crime!”

Another commented: “I’m afraid of the future where this can be done to a journalist. Without access to information, we cannot protect ourselves from existential challenges, like crimes against the environment, democracy, consumer protection, generating refugees in wars for profit and big corporate and financial crimes.”

Many expressed their appreciation to Assange. One donor wrote: “Julian’s heroism is inspirational. More than any other individual in history, he has shone a light on the truth. His prosecution has backfired on his persecutors and they are the ones who will be judged.”

Supporters from the US said the attempted prosecution of Assange was a frontal attack on their own First Amendment rights. Donors from Australia condemned the refusal of Labor and Liberal-National governments to defend the WikiLeaks founder, despite the fact that he is an Australian citizen and journalist. Some French contributors simply wrote “Je suis Julian Assange.”

The outpouring is an indictment of the corporate media internationally. Their coverage has followed a perverse law of inversion: the greater the attacks on Assange’s legal and democratic rights, the less they have written.

This underscores the extent to which official publications—enjoying the closest ties with the political, military and intelligence establishments, and largely staffed by self-advancing upper middle-class careerists—have dispensed with any genuine defence of press freedom.

It also demonstrates the degree to which the latent public support for Assange has been suppressed by a range of political forces This includes the pseudo-left, which abandoned the WikiLeaks founder years ago, as well as the British Labour Party, the Bernie Sanders wing of the US Democratic Party, the trade unions and all the official parties in Australia, from Labor to the Liberal-Nationals and the Greens.

The fundraiser is further confirmation that a campaign in defence of Assange and fundamental liberties must orient to the working class, the constituency for democratic rights and opposition to imperialist war.

The emerging social and political struggles of workers around the world are directed against the very forces that have spearheaded the WikiLeaks founder’s persecution, which is aimed at establishing a precedent for the repression of all opposition.

To donate to Assange’s legal defence, follow this link: https://www.crowdjustice.com/case/julianassange/