“I have nothing but a bunch of ashes”

A hellish nightmare has engulfed the West Coast of the United States. Record breaking heat waves, fire and lightning storms have led to the outbreak of over 600 fires throughout the state. The nation's largest and most populous state, and a global breadbasket, has been turned into a deadly inferno fueled by extreme heat waves and weather conditions that sparked fires which have decimated land areas larger than the state of Rhode Island. Currently some 13,700 firefighters are battling the blazes, air pollution is at hazardous levels and at least six lives have been lost.

The dead include a helicopter pilot who crashed while dropping water on blazes in Fresno County, a still unidentified family of three in Napa County, a male Solano County resident and a Pacific Gas & Electric (PG&E) utility employee working in the Vacaville area.

Two firefighters in Marin County nearly lost their lives on Friday after they were surrounded by flames from the Woodward fire. By chance, a helicopter was nearby and rescued them with minutes to spare. “Had it not been for that helicopter there, those firefighters would certainly have perished,” said Sonoma County Sheriff Mark Essick. 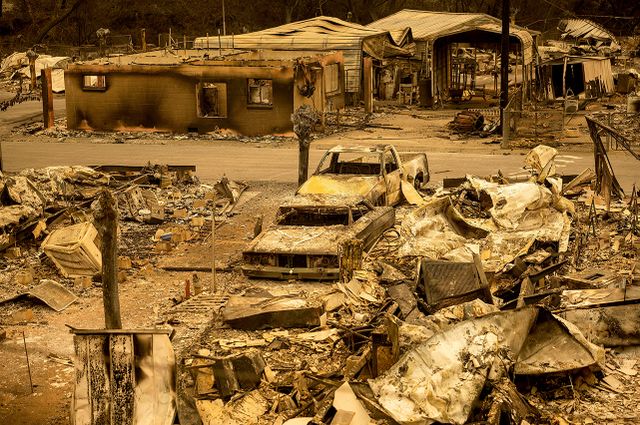 Rare August thunderstorms last week above the Northern California Bay Area produced more than 20,000 lightning strikes that hit trees and vegetation, at a time when vegetation is at its driest, resulting in fires and “complexes” of numerous fires that have merged into major conflagrations in parts of the state. As of Saturday night, more than 140,000 people in the Bay Area have been evacuated while many are choosing to stay behind and attempt to protect their home from approaching walls of fire.

The group of fires known as the L.N.U. Lightning Complex in Napa Valley, burning across the counties of Sonoma, Lake, Napa, Yolo and Solano is the second largest fire in California history. Fire has burned through more than 341,000 acres and consumed 845 buildings and damaged another 230 and is only 17 percent contained as of midday Sunday.

The CZU Lightning Complex started August 16 from lightning strikes in San Mateo and Santa Cruz Counties. The complex has charred 71,000 acres, 24,000 structures are threatened, and it is eight percent contained as of Sunday. The River Fire in Monterey County has scorched 42,583 acres, up from 10,000 acres Wednesday, and is 12 percent contained.

The Lake Fire near Lake Hughes in Los Angeles County has continued to burn since August 12 when it began near the Angeles National Forest. So far, it has destroyed 12 structures and 21 outbuildings, damaged six structures and threatens 1,329 others, and has consumed a total of 30,763 acres. By Sunday evening it was only 52 percent contained. Full containment is not expected until early next month.

81-year-old Vacaville resident Hank Hanson lost everything in the fires. He told the Independent, “Tuesday night when I went to bed, I had a beautiful home on a beautiful ranch... By Wednesday night, I have nothing but a bunch of ashes.”

Added to this is the painful devastation of Big Basin Redwood State Park—the oldest in California where 1500 to 1800-year-old living redwood giants and remains of their over 2,000-year-old ancestors became towering kindling over the weekend.

While the extent of the devastation has already hit near records, CAL FIRE expects conditions to worsen this week with dry heat, low humidity, and potential dry lightning expected to begin Sunday and continue over the next several days with another round of thunderstorms that will produce little rain. The National Weather Service issued a red-flag warning of extreme fire danger from 5 a.m. Sunday to 5 p.m. Monday, stretching from Sonoma County all the way through Monterey County.

Hundreds of thousands have been ordered to flee their homes as dozens of wide scale evacuation orders have been called in many areas throughout dozens of counties. Schools and fairgrounds have been hastily turned into shelters. In the time of COVID-19, residents have been forced to flee one deadly situation to another, leaving behind homes and all possessions to enter into crowded fairgrounds and school sites—many of which are at capacity.

More than 77,000 people were forced to evacuate due to the CZU August Lightning Complex Fire in Santa Cruz County, but the main evacuation center is at max capacity due to COVID-19 social distancing with seventy-nine evacuees and their families living in tents inside the Santa Cruz Civic Auditorium. The vast majority are forced to live in their cars or rely on family. State provided hotel vouchers were quickly depleted. Evacuee Liz Jackson told KGO-TV ABC News 7, "We are frustrated and desperate... feeling like we're not in control, it's been horrible.”

Hazardous smoke from the hundreds of fires is flooding the Bay Area and Southern California, endangering the respiratory health of millions of residents in the metropolitan areas. In San Jose, Concord and Vallejo, the air quality index has surpassed 150, threatening everyone in the region.

Many residents have chosen to stay behind to battle the flames and risk their lives, with the full knowledge that if they lose their homes, they will struggle for years with displacement, insurance battles—assuming they are covered—and the rebuilding of a life from scratch under economic conditions akin to the Great Depression of the 1930s.

Cheryl Martin, a 61-year-old high school teacher in Santa Cruz County, told the Washington Post that she and her husband packed up to flee their home on Tuesday when the smoke became so unbearable that she needed a mask in the house. Her husband waited until she was on the freeway to tell her he was going to stay behind to try to save their home. Only on Thursday did he end up fleeing at the last minute, when he could see glowing flames approaching.

Daron Wyatt, public information officer for the California Interagency Emergency Response Team, told reporters, “That’s one of the biggest problems is people decide that they want to stay that they’re not in great danger and then if it does, the situation does change, the firefighters have to shift their focus from fighting the fire to try to protect life.”

The fact that many are choosing to risk their lives or face destitution in a terrible economic crisis is a complete indictment of the capitalist system. In fact, thousands were never made whole and are still homeless and displaced from the record-setting wildfires in 2018 which claimed 84 lives, wiped out the entire town of Paradise, California and produced apocalyptic scenes of people forced to exit their vehicles and run for their lives on gridlocked highways as flames engulfed rows of cars.

It was only in June of this year that PG&E, the Northern California energy utility, pleaded guilty to 84 felony counts of involuntary manslaughter and one felony count of unlawfully causing the devastating Paradise fire. The agency routinely failed to inspect and repair its power lines for years and attempted to declare bankruptcy to escape its debt obligations and other legal liabilities.

While the annual fires are portrayed as being purely environmental and unpredictable, nothing could be further from the case. Like clockwork, every year the fire season arrives between April and October, and every year lasts longer, but also like clockwork the state is always unprepared, with firehouses grossly underfunded and understaffed, while annually the summers get hotter, vegetation drier, and more days with extreme weather are added every season, the result of manmade climate change, which is causing more frequent and severe heat waves in the region and ever larger wildfires across the West.

The current heat wave throughout the state is extremely deadly and breaking records. The temperature at Death Valley National Park hit a scorching 130 degrees Fahrenheit (54.4 Celsius) last week, marking what is likely the hottest temperature ever recorded on Earth. In coastal Santa Cruz, temperatures reached 107 degrees Fahrenheit (41.7 Celsius) and along the agricultural Central Valley they exceeded 110 degrees F (38.3 C).

Exposing the poor state of infrastructure, many utility companies have enforced rolling blackouts in the middle of the deadly heat wave, cutting power to 130,000 people in southern California and 220,000 people in the Central Coast and Central Valley areas.

The journal Environmental Epidemiology estimated that across the US, some 5,600 deaths are attributable to heat annually. Extreme heat disproportionately affects farm and agricultural workers, children and the elderly, with the vast majority of deaths in poor and working class neighborhoods that lack access to cool spaces. Heat stroke is the leading cause of work-related death among farm laborers.

The Senate Energy and Natural Resources Committee predicts that wildfire blackouts could be California’s “new normal for the next 10 to 30 years, or even longer.” A 2019 University of Southern California environmental study found that the number of extreme heat days—those with temperatures above 95 degrees Fahrenheit—will more than double by 2070 in urban South Los Angeles.

So far in 2020 there have been over 6,000 wildfires of varying sizes throughout California, including the hundreds that are currently burning, compared to over 8,000 in 2019. Despite the predictability of the annual fires, there is nowhere near the number of fire crews, airplanes and helicopters needed to put out the fires. While the state relies on over 2,200 cheap prison laborers to risk their lives battling fires for $2-5 dollars a day, many are currently unavailable due to an early release initiative aimed at limiting the spread of coronavirus in the state’s prisons.

California Governor Gavin Newsom reported Saturday that his office has sent for firefighters from the East Coast and Australia, cynically stating that “These are unprecedented times and conditions, but California is strong—we will get through this.” In line with the push to reopen schools and the economy, Newsom’s callous statement amounts to an acceptance of mounting devastation and death from wildfires.

The state has systematically cut funding for social infrastructure, fire department budgets continue to be slashed, and nothing has been done to mitigate the wildfire danger.

In the wealthiest state, home to 154 billionaires—the largest number in the US—as well as Silicon Valley and the Hollywood film studios, the resources more than exist to adequately prepare for the annual fire season by injecting billions into the fire departments, upgrading the states aging energy infrastructure and carrying out controlled burns to clear dry vegetation, but these are not the priorities of the ruling elite.