The COVID-19 pandemic is causing a world hunger crisis of historic proportions. Despite advances in agriculture and global food surpluses, an additional 132 million more people will go hungry than previously predicted this year. According to some projections, before the year’s end, more people will die every day from starvation brought about by the pandemic than from the disease itself.

As a result of the pandemic, immense amounts of food are being destroyed because of the breakdown in global food supply chains while workers and peasants have less money to purchase food with as a result of the global economic collapse. Though the pandemic has severely exacerbated the crisis, it should be noted that global hunger was already rising in the years before it struck. Now, every region of the world is experiencing mass hunger, including countries that were thought to be relatively secure such as in Europe and the United States. 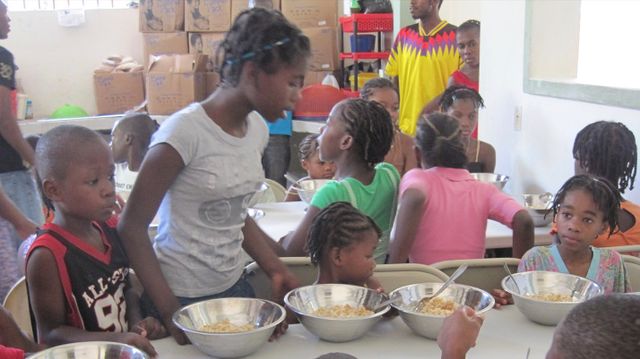 Children at an orphanage in Haiti (Image credit FMSC/Flickr)

Even without taking the pandemic into account, if previous world hunger trends continued, by 2030 the number of severely hungry, those who have run out of food, and have gone a day (or days) without eating, would have risen to 840 million people. If the current forecasts are supplemented with the impact of COVID-19, an additional 83 to 132 million people will go hungry in 2020 depending on the economic situation.

Should there be an economic upturn in 2021, the number of hungry would go down somewhat, but would be still above what was originally predicted without the virus.

Mariana Chilton, director of the Center for Hunger-Free Communities at Drexel University, told Bloomberg, “We’ll see the scars of this crisis for generations. In 2120, we’ll still be talking about this crisis.” Early United Nations forecasts predicted that around one in ten people on earth will not have enough to eat this year.

The charity Oxfam International estimated that by the end of 2020, some 12,000 people will die every day from hunger linked to COVID-19. This figure is based on a more than 80 percent increase in those experiencing crisis-level hunger. So far, more than 860,000 people worldwide have died directly from the novel coronavirus.

Even the mildest forms of food insecurity, experts warn, can have an immense toll on the human body. Lack of nutrition leads to a weak immune system and lower mobility and brain functioning. Hunger in children can lead to physical ailments that last for the rest of their lives.

COVID-19, in addition to triggering economic depression conditions for many workers around the world, has also disrupted global food supply chains. Restaurants that used to account for many food distributors’ business are no longer in operation, forcing farmers to dump valuable food crops or simply let them rot in the field. With no adequate infrastructure in many parts of the world, there are no readily available means by which this food can be redirected to those in need.

Don Cameron, a cabbage farmer from California, told Bloomberg, “We know other parts of the country need what we have here. But the infrastructure has not been set up, as far as I’m aware, to allow that. There are times when there is food available and it’s because of logistics that it doesn’t find a home.” Cameron ended up throwing away about 50,000 tons of his crop since local food banks “can only take so much cabbage.”

Even before the pandemic, the UN predicted hunger rising to 841 million people by 2030. With COVID-19, the number of undernourished will be closer to 909 million. Despite unprecedented wealth concentrated at the heights of society, the UN’s World Food Programme (WFP) requires $13 billion to deliver food in 83 countries but has a shortfall of $4.9 billion for the rest of the year.

Those living in the major food-producing regions of the world have not been spared hunger either. Latin America, which exports agriculture all over the world, is leading the surge in hunger this year based on the WFP’s analysis.

Despite the UN’s findings that there exists more than enough food to satisfy every person’s need, social inequality prevents many from eating well. In the US, the richest country in the world, some 2 percent of the population, more than 5 million people, cannot afford a healthy diet.

Another 3 million Americans are unable afford basic energy costs. The situation is even worse in India, where 78 percent of the population, more than 1 billion humans, cannot afford a healthy diet. These figures, of course, existed well before the onset of COVID-19.

The UN’s Food and Agriculture Organization observed that the rate of hunger began to level off in recent decades but began to steadily climb in 2015 as a result of climate change and ongoing wars stoked by imperialism. However, the forecast now will see hunger rise in 2020 at a rate higher than the last five years combined.

In 2015, the UN committed itself to work toward a hunger-free world by 2030. Despite advances in food agriculture, distribution, and a slight downward shift in the number of undernourished throughout the world in the last few decades, the goal of a hunger-free world in less than 10 years is more remote than ever under the present circumstances.

The figures cited by Oxfam and the UN are a vindication of the analysis provided by the World Socialist Web Site that the pandemic was a “trigger event” that metastasized all the irrational and reactionary tendencies that already existed under world capitalism. Or as the UN’s report put it, “Economic conditions, structural imbalances and the inclusiveness of the policy framework interact with natural and man-made causes to trigger persisting poverty and hunger.”

The resources already exist to provide a global system of food logistics that guarantees everyone with an adequate amount of nutritious food every day, but they are being squandered on war and fattening up the stock portfolios of the rich. Only a planned economy built on socialist principles can eliminate the main cause of hunger in the world today, capitalism. This can only be achieved by expropriating the wealth of the ruling class and redirecting it toward providing for everyone’s needs, not private profit.