Sparking international outrage, 13-year-old Linden Cameron remains in serious condition at the Primary Children’s Hospital in Salt Lake City, Utah, after a still unidentified police officer with the Salt Lake City Police Department shot him multiple times Friday while he was suffering a mental health crisis in his home.

News of the heinous shooting of a young unarmed child has rippled through the world with autistic persons, their families, friends and community members taking to social media to voice their support and horror. A Go Fund Me page established for Linden’s medical bills has already exceeded $75,000 as of this writing. 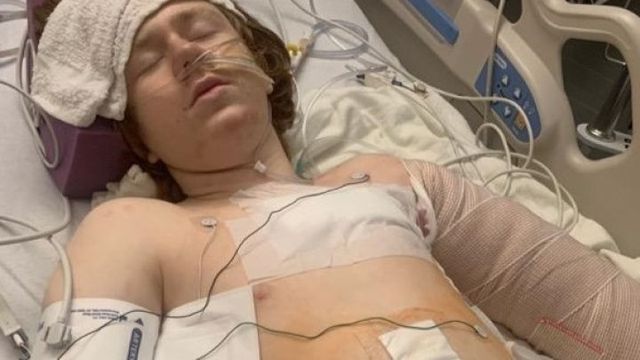 Linden Cameron, 13, recovering in the hospital after being shot multiple times by an unidentified Salt Lake City Police officer

Exemplifying the brutal class nature of police violence, the shooting of Cameron, who is white, comes less than a week after police body camera footage was released showing the March 23 police killing of Daniel Prude, a 41-year-old black man in Rochester, New York.

In both instances concerned family members reached out to emergency services to assist loved ones experiencing a mental health crisis and in both cases police responded with deadly force, killing Prude and leaving Linden with a long, painful road to recovery.

Golda Barton, Cameron’s mother, in interviews with KSL TV and KUTV, says her son has injuries to his shoulder, both ankles, intestines and bladder. Barton had called emergency services and requested a Crisis Intervention Team (CIT) to assist her in transporting her son, who had previously been diagnosed with Asperger syndrome, to the hospital. Barton was under the impression that police would use “the most minimal force possible.”

Barton had just returned to work for the first time in a year last Friday, leaving Cameron at home. According to Barton, her son "has bad separation anxiety” and she received a call at work that he was having an emotional episode. As Barton drove home she called 911 and requested a CIT officer to come help.

According to a spokesman for the Salt Lake City Police Department, detective Michael Ruff, all of the officers are “certified” in de-escalation techniques and new recruits are required to have 40 hours of crisis-intervention training.

“We’re very comfortable with the program we used and with the individuals who are teaching it,” Ruff said in an interview with the Associated Press following the shooting. While declining to state what steps or decisions might have led the police to unload multiple rounds into a child, Ruff reiterated, “there’s more than one way to be CIT trained.”

While on the phone with emergency services Barton explained that her son was unarmed and that “he doesn’t have anything, he just gets mad and he starts yelling and screaming. He’s a kid, he's trying to get attention, he doesn’t know how to regulate.”

According to Barton, once Cameron saw the officers arrive at the house he got scared and ran away. Barton met officers at the front door of her home, who told her to go wait in her car, while they apprehended her son. Barton recalled in an emotional interview that within five minutes she heard officers yell at her son, “get down on the ground,” followed by several gunshots.

“I heard the guns and the yelling and the guns, and then I sat there in my car for what felt like a long time and I was waiting for someone to walk over to me because I didn’t know what just happened,” Barton explained. “And I was like OK, um, OK … they just unloaded a whole clip in my son, and probably he’s dead because he’s so small.”

Barton says she then saw police put handcuffs on her son as he was laying silent on the ground. She says she did not know if he was alive or dead and officers refused to tell her why they shot him. “He's a small child. Why didn't you just tackle him? He's a baby. He has mental issues.”

Linden’s older brother Wesley Cameron spoke to local media regarding Linden’s injuries: “He said he can’t feel any feeling in his left hand. From my understanding he got shot in both feet,” Wesley said. “So now we’ll never be able to do the things we used to do, like longboard and play video games together.”

Barton continued, “You are big police officers with massive amounts of resources. Come on. Give me a break.”

Data compiled by the US Census Bureau confirms Barton’s point. If one were to add up all of the annual budgets of police departments across the US as of 2017 it would total over $115 billion, which is larger than every other country's military budget besides China and US.

While unlimited funding is made available for the special bodies of armed men, as the WSWS has previously reported, funding for vital public health infrastructure, including mental health services has been reduced by billions under both Democratic and Republican administrations in every state for over 30 years.

Police, as is standard procedure when covering up their crimes, are refusing to release any information pertaining to the incident including how many times Cameron was shot or why the officer determined it was necessary to use deadly force on a child who weighs less than 100 pounds. Bodycam footage of the incident does exist, however the department has stated it will not release it for “10 business days...as this is an active investigation.”

Immediately after the shooting in an early Saturday morning press conference, Salt Lake City police spokesman Sergeant Keith Horrocks trotted out the standard justifications for police brutality, stating that officers were called to the address for a “violent psych issue” involving a juvenile “having a mental episode” and “making threats to some folks with a weapon.”

As of this writing, no “weapon” has been recovered. In follow up interviews, Barton has denied that her son was violent towards officers or that he had a weapon.

On Sunday, Salt Lake City’s Democratic mayor Erin Mendenhall issued a brief statement labeling the incident a “tragedy” while giving her support to the “investigation,” which she expects “to be handled swiftly and transparently for the sake of everyone involved.”

Demonstrating the “transparent” attitude endemic to police departments around the world who routinely cover-up and get away with vicious crimes against working class adults and youth, Salt Lake City Detective Greg Wilking, in an interview with CNN, refused to state whether Cameron had a weapon, or “what the officers’ perceived threats were,” adding, “Mom can say whatever she wants, but there's this investigation that has to happen and this process that has to take place.”

In stark contrast to the brutal indifference the police have shown Barton and her family, on social media thousands of people have come forward to share their outrage and similar stories. One commenter wrote on Facebook, “As a father of an autistic 14 year old [who] is very similar, I am more than furious. My son has had a number of run ins with the police, when his emotions overwhelm him, and we have been lucky. However, one deputy warned me to ‘deal with him myself, because I’ll hurt him if I do it.’ Now I am afraid to call them at all. For good reason.”

A study conducted by the Treatment Advocacy Center found that people with severe untreated mental illnesses are 16 times more likely to be killed by police and are involved in nearly 1 in 4 fatal police shootings. The question of allocating appropriate and necessary resources and training so that all have access to the necessary health care is a class question. It cannot be resolved through “reforming” or “defunding police” who do not exist to protect workers and their families, but to safeguard the interests of the ruling elite and violently dispatch any “perceived threats,” no matter how small, to themselves.