Boris Johnson’s government has announced plans for weekly COVID-19 tests for everyone in the UK, 10 million tests a day, in a programme branded “Operation Moonshot.”

The prime minister claimed that testing capacity would be increased from 300,000 a day now to 500,000 in October and reach the 10 million figure—with the help of “simple, quick and scalable” tests which provide a result in 20–90 minutes.

The plans were met even by Conservative Party insiders with ridicule, described variously as “not feasible” and “crazy.” A leaked briefing memo sent to the Scottish government, published by the British Medical Journal (BMJ), said the programme, if ever implemented, would cost more than £100 billion. This is around three-quarters of the annual budget for the National Health Service (NHS). But so far only an additional £16 billion has been directed toward the entire NHS and other public services in the six months since the pandemic was declared by the World Health Organisation (WHO). Figures in the hundreds of billions have exclusively been reserved for the financial support of major corporations during the pandemic. 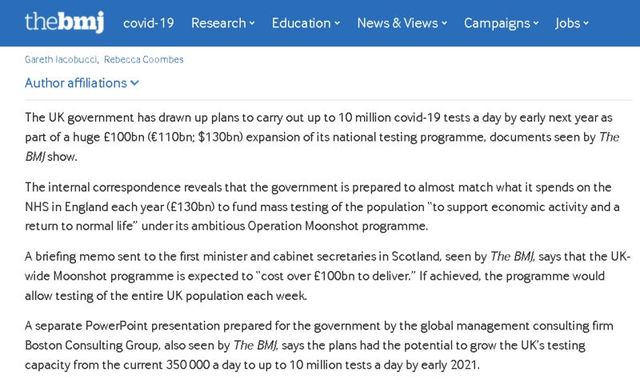 The government also admits that the technology required for rapid testing is not currently available. A WHO diagnostics expert told the Independent that the plan was “dependent on different technologies to what are being used now [in the UK]. It’s a massive gamble.” Moreover, the new techniques under consideration were often “untested” or came from companies “without much experience of medical testing at scale.”

Dr David Strain, chairman of the British Medical Association (BMA)’s medical academic staff committee, said the mass-testing strategy is “fundamentally flawed” and “based on technology that does not, as yet, exist.”

However, the announcement of the programme was motivated purely by the most reactionary political considerations, rather than any genuine desire to combat the pandemic. A draft document leaked to the BMJ is titled, “UK mass testing narrative.” Johnson summed up this narrative Wednesday night: “Up to now we have used testing primarily to identify people who are positive—so we can isolate them from the community. But in the near future we want to start using testing to identify people who don’t have coronavirus and are not infectious, so we can allow them to behave in a more normal way…”

The government want to shift from a formal policy of controlling the virus to one of encouraging as much intermingling as possible. Johnson told the press Wednesday, “That level of testing would allow people to lead more normal lives, without the need for social distancing. Theatres and sports venues could test all audience members on the day and let in those with a negative result, all those who are not infectious. Workplaces could be opened up to all those who test negative that morning and allow them to behave in a way that was normal before COVID.”

The overriding objective of the programme, or rather the promise of the programme, is to provide a cover for the reopening of the economy. The leaked documents explain, “This is described by the prime minister as our only hope for avoiding a second national lockdown before a vaccine, something the country cannot afford.”

What this means is the virus will continue to spread unchecked. “Operation Moonshot” is a trojan horse for the policy of herd immunity.

The government’s own Scientific Advisory Group for Emergencies (SAGE) published a consensus document on mass testing August 27 warning that “any mass testing programme” would have little impact on the reproduction rate (R value) of the virus without, “superb organisation and logistics with rapid, highly sensitive tests,” and could “only lead to decreased transmission if individuals with a positive test rapidly undertake effective isolation.” Any testing programme authored by Johnson would do none of this.

Dr Chaand Nagpaul, chair of the British Medical Association, warned that “the notion of opening up society based on negative tests of those without symptoms needs to be approached with caution—both because of the high rate of ‘false negatives’ and the potential to miss those who are incubating the virus.”

Andrew Lee, a Reader in Global Public Health at the University of Sheffield, warns that in this case the “affected individuals who may be infectious are falsely reassured. They will continue with their lives, potentially relax their infection control behaviours, and infect others.”

The Royal Statistical Society sent an open letter to the Times this week which noted, “Present tests miss about a fifth of those with the disease.”

A shift to this new system will also derail an already failing contact tracing system. Independent SAGE member Martin McKee wrote in the BMJ that the Moonshot project “will distract from fixing the problems with the existing system, especially as public health staff are struggling with the abolition of Public Health England.” Last week, only 69.2 percent of close contacts of people who tested positive with coronavirus were reached through the government’s Test and Trace system—the lowest percentage since the programme began. There are worries that a significant percentage of people who are asked to isolate do not do so because they simply cannot afford to. Roughly 25 percent of infected people do not or are not able to provide a list of contacts.

The government’s latest update also notes, “since the start of July, the median time taken to receive a test result has seen an overall increase.” In the week August 13 to August 19, “Home testing kits saw the biggest increase in the median time [taken to receive results] during this period from 58 hours to 71 hours… Regional test sites increased from 23 hours to 27 hours and mobile testing units increased from 21 hours to 25 hours.”

The leaked documents indicate that the government’s plans are a massive windfall for the private sector, with “communities, institutions and employers” allowed to carry out tests. “Private sector/ business-led testing,” it adds, “plays a key enabling role.” “Letters of comfort” have already been sent to GSK, AstraZeneca, Serco and G4S. Retailers Boots and Sainsbury’s are also named, and Deloitte is reportedly being given a contract for more than half the work.

This is being rolled out under conditions where the seven-day rolling average of daily infections has already close to trebled in the last month to 2,532 and the R value has officially climbed to between 1 and 1.2 for the UK as a whole. Two weeks after schools officially reopened, over 540 have been affected by infections—50 of them with multiple cases. The government’s own “reasonable worst-case scenario” predicts 85,000 deaths over the winter. Other estimates are far higher.

The Tory party can only preside over such a criminal endeavour thanks to the “constructive opposition,” i.e., collusion, of the Labour Party and the trade unions with Johnson’s “back to work” and “school reopenings” agenda.

As the terrible consequences of this partnership unfold, the working class will come into struggle against both main parties of the capitalist class. That movement will be confronted with the full force of the state, including the police and the armed forces, already being prepared under the auspices of an updated “Operation Yellowhammer.”

For the working class to succeed in this struggle, a socialist leadership must be built in every workplace, school and neighbourhood. We urge workers and youth who agree with this perspective to contact the Socialist Equality Party today.