For over two months, thousands of people have been marching in the streets of Bulgaria almost every day in opposition to Prime Minister Boyko Borisov. They are demanding the resignation of his right-wing government as well as new elections and fundamental reforms of the state apparatus. Bulgaria is viewed as the poorest and most corrupt country within the European Union.

Last week, the protests reached their peak to date, as security personnel used significant force against protesters. One hundred twenty people were arrested and around 60 injured. At least 38 people had to be taken to hospital, according to press reports. This includes a number of journalists.

The demonstrations in Bulgaria share many similarities with the protests against President Alexander Lukashenko in Belarus. Yet, unlike the latter case, they rarely get the attention of German and other European media outlets.

The reason for this is simple: Borisov’s GERB Party (Citizens for a European Development of Bulgaria) is a member of the European People’s Party, to which Germany’s Christian Democratic Chancellor Angela Merkel and European Commission President Ursula von der Leyen also belong. His politics are strictly pro-European, while President Rumen Radev, who supports the protests against the government, leans more toward Russia. 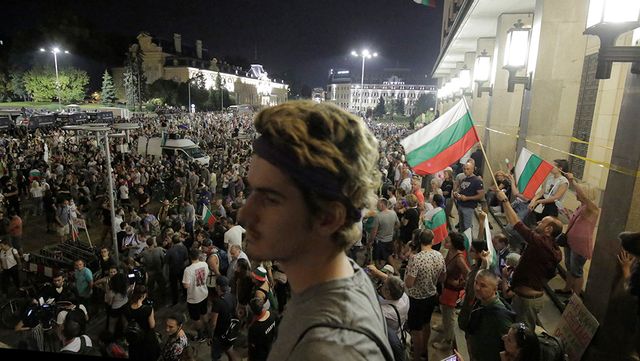 Borisov, who began his political career in the Stalinist Communist Party of Bulgaria, has been in power since 2009. Since then, he has resigned twice in the wake of mass protests, but quickly came back into government on both occasions. Since the spring of 2017, he has been governing in a coalition with the United Patriots, (VP), an alliance of far-right and fascistic organizations.

Borisov is viewed as the embodiment of a system characterized by a tight entanglement of oligarchs, politics and the state. The protests are the “outbursts of long-standing indignation against the corruption and arrogance of the powerful, along with the fear of the coming of a terrible economic crisis,” Hristo Ivanov, who himself used to be a minister in Borisov’s cabinet, told Deutsche Welle .

Ivanov had spectacularly sparked the protests, by breaking into the luxury home of Ahmed Dogan. It is located on public land and has been illegally sealed off by state security personnel. Dogan is known as one of the wealthiest and most politically influential men in the country. After Ivanov put a video about his stunt online, it received over a million views.

The search of the workrooms of two advisers of President Radev also inspired the protests. Radev, a former general, is supported by the opposition Socialist Party, (BSP). Protesters also demand the resignation of Chief Public Prosecutor Ivan Geshev, who is viewed as an assistant of Borisov.

Borisov systematically solidified his grip on power with the help of the police and the military. Most of the press and the judiciary are also under the control of the government and the oligarchs that are aligned with it. Borisov seeks a constitutional change that would limit the authority of the president, while continuing to strengthen the state apparatus.

Supreme Court of Cassation President Lozan Panov, an opponent of Borisov, spoke of a “captured state” in der Spiegel. “In our country, there is an oligarchic merger of the legislature, the executive as well as the judiciary,” he told the German news magazine. He says, therefore, of media mogul Delyan Peevski that the latter is “not formally, but a de facto co-prime minister, as key institutions and offices are under his influence.” Panov accused the European Union of nourishing the cancer of corruption in Bulgaria with its grants.

The protests are socially heterogenous and lack a clear perspective. Calls for a “systemic change” dominate along with those for an end to the corruption. The protesters consist largely of young, educated people from the major cities.

“The spectrum of participants in the protest marches through the inner cities every evening goes from the young climate activists and supporters of the former Communist Party, to the urban conservative middle class and the young Western overseas university students who are currently living in Bulgaria due to the coronavirus pandemic,” Bulgarian broadcast moderator Vessela Vladkova told the MDR television station.

The current protesters are “especially young people who are in a less economically dire situation, but rather they are worried about the future of the country and the morality of the political elite,” according to Vladkova. The government would have difficulties staying in power “if those people who will become impoverished in the fall and winter through the economic crisis, caused by the coronavirus pandemic, join the protests.”

In truth, many workers have already started demonstrating against the government. A group of nurses have been protesting for weeks in front of the Ministry of Health in Sofia.

Babikjan said that he personally would welcome it “if the citizens’ protest declared a leader.” He is also willing to work together with the far-right. “When it comes to the basis of democracy, there is no left or right,” he explained. Like Judge Panov, Babikjan also appeals to the European Union to support the protest movement.

Their political differences with Borisov are minimal. In the 30 years since the restoration of capitalism, many parties and cliques secured their interests on the backs of workers in Bulgaria. The EU is at fault for the horrible conditions in the country. Its austerity packages over the last decades pushed large portions of the population into abject poverty.

The coronavirus pandemic exacerbates the social crisis. So far, there are almost 18,000 reported infections and 700 deaths in the country of 7 million people. There are no protective measures in schools or businesses anymore. The government has categorically ruled out any measures that could hurt economic interests in any way.

The already rampant poverty in the country continued to rise during the coronavirus crisis. Workers with unstable employment have lost their jobs. Many of those who earn their paycheques overseas can no longer travel there. Even before the coronavirus crisis broke out, over a third of children in Bulgaria were at risk of poverty.